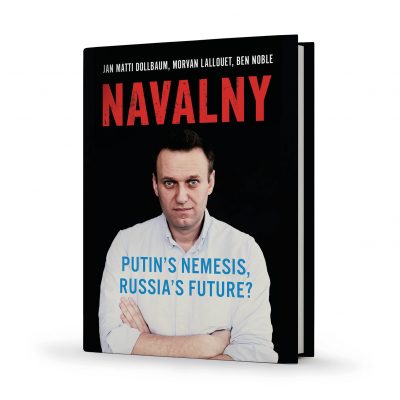 It’s December 24, 2011, and a massive crowd of people gather on Sakharova prospect in Moscow to protest at the results of the parliamentary elections. Among the unusual lineup of speakers consisting of renowned writers, journalists, and politicians, a tall man in a grey coat and loose knot city slicker scarf takes the microphone. In an elevated nine-minute speech, he lambasts Russian authorities for being corrupt, expresses solidarity with the regime’s victims, and calls on people to take to the streets until the protesters’ demands are met. Meet Aleksei Navalny — a lawyer and a blogger turned anti-corruption fighter, a public tribune, and a politician who dared to challenge Russian strongman Vladimir Putin.

Everyone who has been following Russian politics for at least ten years knows about Navalny. With almost twenty years of a political career, he became a symbol of resistance to the authoritarian system developed by Putin. Yet, no single book on Navalny had been produced until these three excellent scholars united their expertise to produce the detailed, sympathetic, yet balanced and highly readable examination of the opposition leader’s political ventures.

The book combines drone-level aerial footage of the authoritarian landscape in Putin’s Russia and meticulous reports from the localities where Aleksei Navalny left his footprints. The authors break Navalny’s story into three pieces: his fight against corruption, his electoral battles for Moscow’s mayoral seat and then the presidential office, and finally describing his engagement with street politics.

It is not a usual biography, however. The scholarly background of the authors looms large through the book’s pages. Apart from standard links to media reports and interviews, the reader will find vivid first-hand accounts of the events related to Navalny based on the extensive studies done by the authors and other scholars. Some political science jargon notwithstanding (sufficiently explained), the book’s style is engaging and accessible, with frequent subsection breaks, colorful sketches, and straightforward argumentation.

The book also frequently departs from Navalny himself to introduce the prominent members of his team, such as Vladimir Ashurkov, Georgy Alburov, Leonid Volkov, and Lyubov Sobol. The authors go beyond the “first circle” of close allies and bring in the stories of volunteers and followers — ordinary people who decided to support Aleksei Navalny actively. In this way, the authors convincingly demonstrate that he became more than just another opposition figure, but the symbol of political changes in the country. Here, the authors reach an important conclusion that as much as Navalny harnesses the power of thousands of his supporters, those who invest in his endeavours use him to push the country in the desirable direction. In other words, they are not zealots blinded by Navalny’s charisma but rational citizens pursuing a rare opportunity to get what they want.

Another important idea in the book concerns the dynamic of power relations in Russia. As a witty and skilful politician, Navalny manages to identify the weak spots in the system, forcing the regime to reveal its true authoritarian nature. From exposing the luxurious real estate owned by high-ranking officials and the president himself to building a political movement and propagating the “smart voting” strategy, Navalny reinforces his stand in the anti-corruption fight, and both electoral and street politics. In return, the Kremlin reacts to these challenges by unleashing propaganda campaigns, destroying Navalny’s organizations and network of volunteers, disrupting his media, and prosecuting, jailing, and pushing into exile his team members and supporters. In other words, every opportunity exploited by Navalny has been later on closed down by the Kremlin.

In sum, from the book’s pages emerge the cunning and principled yet complex figure of a politician, who can strategize and be flexible to fit into the hazardous environment of the retrenching authoritarian state. The authors do not shy away from controversies surrounding Navalny and his team. Neither do they give definite answers to the questions often raised by the public (for example, if Navalny is a “racist”, “populist” or “revolutionary”). But they provide enough evidence to let readers decide for themselves.
In this regard, the order of the book is a bit confusing: ultimately, Navalny is a politician who strives to get into power by the means he finds appropriate and in accordance with his moral judgment. The authors note that in a democratic setting, Navalny would have chosen a different — perhaps more moderate — political platform and tactics. But in the absence of these conditions, he is ready to sacrifice his reputation within the traditional liberal-democratic establishment to get the sympathy of the larger public. In Putin’s autocracy, he uses the available tools to achieve his ultimate political goal: to turn the country into a democratic state with free and fair elections, and a market economy. More than someone’s nemesis, Aleksei Navalny has become a symbol for hundreds of thousands of Russians aspiring to another path for the country than the autocratic present. The book does a tremendous job in explaining to a wider audience the origins, development, and consequences of this symbol, and invites the readers to consider if another Russia is still possible.

Andrei Semenov is Senior Researcher at the Center for Comparative History and Political Science, Perm, Russia