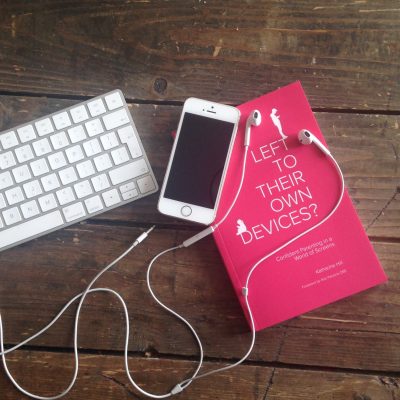 Sometimes the outlook seems bleaker than the darkest midwinter day. Scroll through the headlines. We’re addicted to our smart phones. The kids are hook, line and sinkered. Devices are the new babysitters. We’re rearing a nation of little screen-addicts who go into major meltdown when the Wi-fi’s turned off. And that’s just the toddlers. Their older siblings risk being groomed by paedophiles while still at primary school, sexting at thirteen, full-blown porn addiction by the time they’re fifteen. ‘Have smart phones destroyed a generation?’ asks one news site. ‘Giving your child a smartphone is like giving them a gram of cocaine!!’ screams another, sending legions of parents to google ‘off-grid alternative communities in Scotland’. But 2018 could be the tipping point. It’s no secret that Silicon Valley execs have long sent their kids to tech-free Waldorf schools. HuffPost founder Arianna Huffington and Samsung have launched Thrive, an app to help you switch off digitally, in as much as that makes sense. Even Apple is feeling the heat, with two major shareholders recently demanding it tackles smartphone addiction among young people.

All of which is enough to tempt the most sanguine of parents to lock up every device and go the full Amish. Oh, except a recent New York Times article looked at the problems Amish communities were having as smartphones proliferated. So how can we shield our kids from all this?

You can’t, says Katharine Hill, UK Director of Care for the Family and author of Left To Their Own Devices, a guide on how to parent in a world of screens. She’s a fount of knowledge on every issue family life throws at you, dispensing advice with compassion, humour and a healthy dose of realism.

Thank God for Hill’s straight-talking, “it’ll probably be fine” vibe. Don’t demonise the internet, she urges. And don’t think you can ‘protect’ your kids by banning all devices. Kids will see stuff. On their friends’ phones, the playground, the bus. We need to equip them to deal with it.

They will see porn. Don’t waste time hoping they won’t. Teach them it’s not real life, it’s just acting. Don’t despair when you discover they’ve seen it. Talk about it. Sexting may be illegal for under-eighteens but it’s normal for so many teens, and often a precursor to dating. Talk to them about their digital footprint. Would they take their top off in geography class? Would they mind if granny saw? Then there’s grooming. Even young kids need to know people aren’t always who they say they are online. Never give personal details away. Help kids to become media savvy so they understand how companies target them. And teach them how to switch off. Charge devices downstairs. No phones in bedrooms. That means you too. Because our kids aren’t the only addicts. How often do you fob them off while you’re absorbed by your phone? Values are caught not taught warns Hill. The family media agreement she suggests every family draws up (with the kids) won’t work unless you’re in.

The recurring theme of the book? Talk, talk, talk to the kids and it’ll be fine. The more their online life is integrated into family life the better decisions they’ll make. Its unintended consequence is that it shines a glaring spotlight on our own smartphone habits, which are more damaging and deep-set than we’d like to admit. Yes, we need to help our young people to survive and thrive in this digital world. But increasingly many of us are waking up to the fact that we need to look at our own smartphone dependence too.

Left To Their Own Devices, by Katharine Hill, is published by Muddy Pearl.