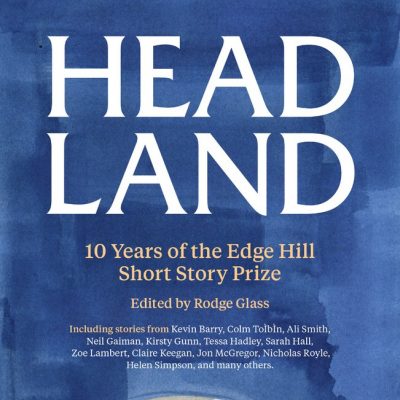 Head Land is an exciting anthology of twenty eight diverse short stories, a tempting excursion into the minds of distinguished writers – Colm Toibin, Jon McGregor, Ali Smith and Kirsty Gunn to name just some, all connected with ten years of the Edge Hill Short Story Prize. This volume is its own cabinet of wonders. Here writers are prepared to take risks, brave the dark interiors and present unique work. It includes a ghost story by Neil Gaiman, the psychological horror of Stockholm Syndrome with a twist in George Clooney’s Moustache, the poignant apocalyptic diary entries of a desperate thirteen year old girl in 2040 in Diary of an Interesting Year and social realism with an unusual angle in Toibin’s story of paedophilia, A Priest in the Family. Graham Mort’s study of decay, loneliness, childhood and old age in The Lesson is deeply moving while Zoe Lambert’s wonderful blend of war, memory and Lithuanian mythology in These Words Are No More Than a Story About a Woman on a Bus is full of surprises. There are haunting stories about love and desire, such as Vuotjarvi,  Married Love and Wifey Redux and also some delightful slipstream fiction in Monsters and The Rainbow, the latter a beautifully written story about a breakdown after the end of a relationship, which is combined with the surreal appearance of an everlasting rainbow. Although readers might want to look for analogies and parallels to encourage comparison, each story, as Rodge Glass writes in the introduction ‘occupies a unique space on the page.’ Not linked by theme but by an incredible array of voices and talent, this is an eclectic piece of work, best enjoyed story by story.

For the Scottish reader many of our prominent storytellers are included: Ali Smith, A.L Kennedy and John Burnside. A waft of whisky and horrors in The Deer Larder,  Burnside’s tale of superstition and aloneness, is particularly resonant. In this tale, an ill screen writer with a lovesick past, has taped up a quotation by Maurois opposite his computer: le bonheur est une fleur qu’il ne faut pas cueillir (happiness is a flower that you mustn’t pick). Although stoic and self-sufficient, he soon starts receiving emails in a sort of ISP crossline from Martin, a university lecturer huddled up on Jura writing a biography of Maupassant. These emails/tales addressed to Monique are designed at first only to tempt her back into a relationship with Martin. However, on an island so rich in myths and legends behind the ‘slow, sweet smirr’ are not only blood-feeding wingless flies (known locally as keds) but the sight of a strange girl Martin sees when deer stalking. This fleeting perception becomes an obsession, its presence gradually invading his psychological space. Burnside captures the uncanny links between the two men astutely.

Monsters by Chris Beckett has a distant setting, a wondrous landscape, convincing characters with a certain exaggerated remoteness and, despite the strangeness of the tale, an inherent poetic or psychological truth. Set in a place called Flain, the story at first lulls the reader into a sense of normality, yet there’s plenty of satire of upper class bohemian pretensions. The narrator, Mr Clancy, has not come to taste the insipid talents of the inhabitants of Fain but to find out about their Fire Horses – ‘imprisoned’ and ‘tormented’ monsters kept in the dark, which act as an ‘injection of venom to the imagination.’ Monsters however ironic, is about the difficulties of ‘harnessing the power of our demons’ or being controlled if we choose to ignore them. However, this story is lightened deliciously by humour. Anyone familiar with Lego might know that Flain is the leader of a group of toys; his problem is if he thinks too much his brain catches fire. Alongside this wink to the reader, Fire Horses also exist in Chinese astrology. Every sixty years is the Year of The Fire Horse, the last one being in 1966. These rebellious, rare, flamboyant creatures are a perfect metaphor for the imagination which we confront as readers every time we dip into story.

Perhaps the most memorable tale is The Redemption of Galen Pike by Carys Davies. It combines subtlety, beauty and directness of language and a quiet lyrical evocation of time gone by in America. In the story,  a Quaker spinster called Patience, dressed in ‘flat-heeled boots’ and carrying her ‘Red Riding Hood basket’, brings warm biscuits and strawberry cordial to a prisoner waiting to be hung for unspeakable crimes. The opening expands to take in the social and political context of the town as well as signalling repressed desire and spiritual awakening. If that seems a great deal in one story, such depth and intricate interweaving is a notable feature of this whole anthology.

Head Land is a wonderful echo chamber where there is a strong sense of recognising truth told in artful and courageous ways. Such stories are gifts, where human experience, however raw or strange, dazzles on the page revealing our strengths and vulnerabilities. Short stories take such a little time to read but give generously in return. In True Short Story Ali Smith eruditely questions the nature of the short story itself. Between Smith’s philosophising and insightful quotations about the form itself, lies a story about life and death, two women and breast cancer treatment, which underlines Alice Munro’s comment that: ‘every short story is at least two short stories.’ The richness of each story in Head Land makes it a spellbinding read.