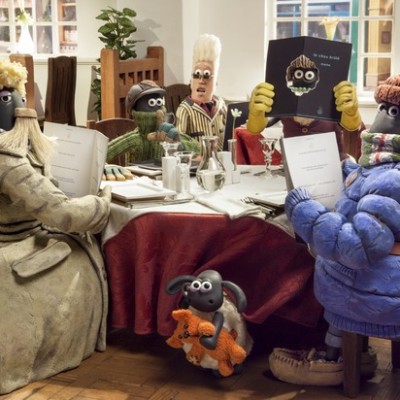 Aardman is the superbly talented studio behind Wallace and Gromit, Chicken Run and now Shaun the Sheep Movie, another stop motion delight that takes the popular characters from the TV series and puts them in the middle of the city. It’s a hilarious film, animated with all the bravura and skill we’ve come to expect from the Bristol-based team. For Down the Rabbit Hole, Product spoke to the two directors, Richard Starzak and Mark Burton, about directing clay figures and making it funny.

Product: Stop motion is possibly the most time consuming form of film making. Was there a point, perhaps when you were tweaking the eyebrow of a background character, where you thought ‘why are we doing this?’

Mark Burton: Actually I think I disagree with that, all kinds of animation are time consuming, it’s the same process whether it’s CGI or some other form. You have to tweak 12-24 movements per second. That’s the way we work, it’s what we are used to, really.

Richard Starzak: There’s two things I’d say to that. One is that you don’t actually do it, you get other people to do it who’d do it much better than we do. That helps a lot. But also, if you talk to the animators they will tell you that when they get really in the zone, time goes flying by. They really love their work. It’s not as boring as they might sound.

It’s not boring, but it is very meticulous, isn’t it?

What do you think stop motion offers that other media doesn’t?

RS: I think it’s incredibly satisfying from a selfish point of view when producing it, because you are in a physical space. You’ve got the sets, you’ve got puppets, you’ve got animators who are like actors. It all really exists. I honestly think that there is a huge amount of people out that love to see real physical objects being animated as opposed to computer animation, although we obviously love that as well. There’s something special about it being a physical thing.

I’m a huge fan myself, I like watching the old Wallace and Gromit films where you can actually see the thumb prints on the clay.

RS: I think there is something very visual and physical about the whole thing, and there is something in the limitations of physically building sets and puppets that, maybe, as an audience you are aware of, and makes you enjoy it. It inhabits the world in a slightly different way.

It seems as though Aardman has formed its own unique aesthetic. What do you draw on for visual influences? Is it fair to say you have an in-house style or does each project have different influences?

MB: I think that myself and Richard Starzak, Nick Park, the owners of the company Dave Sproxton, Peter Lord and several other people here, we’ve all grown up with the same influences, read the same comics when we were kids, whether it was the Dandy or the Beano, or Gary Larson cartoons. There are a number of things common to all of us and I think that’s probably what shows rather than a house style.

RS: When we were approaching the Shaun the Sheep Movie in particular, we were obviously influenced by the silent movie greats, we would watch a lot of Charlie Chaplin and Buster Keaton and also Jacques Tati, who wasn’t silent but made films that had sound effects or noises so it didn’t really have dialogue where people speak to tell the story.

MB: I think that’s true. I can speak for Nick Park when I say that he wrote his earlier films as silent comedies, then added the dialogue later.

One of the things that I loved about Shaun the Sheep was that it made the most of cinema and comedy as a visual medium, because of the lack of dialogue. When did you decide to make it a ‘silent’ film? Obviously the show is, but you didn’t have to do that for the film.

RS: We thought we’d stick to the integrity of the series, really, and we kept all the characters from that. But we did wonder; we went down other avenues, seeing if we could have other characters talking in storyboards. But in the end I liked the idea that it was exciting and exhilarating to not have any dialogue.

MB: Although we had loads of silent comedy to draw on, we were initially worried we wouldn’t have be able to do it for a whole film. But actually, it was very empowering because we had to think about telling the story in a certain way, we couldn’t fall back on dialogue. It also created space for loads of slapstick that Richard and I both love. We also thought about Wall E. The first act of that is fantastic, then everyone kind of forgets about the rest of it, so we thought we should push on and make the whole film like that.

Disney have 12 principles of character animation, e.g. squash and stretch. Do you have a similar rule book for animating characters.

RS: Well, frankly, no. I think we treat stop frame a bit more like live action, so while animating a character is important at the end of the day it’s about conveying what their thinking. It’s more important to show what’s going on in their head.

MB: I think the animators are a team so for continuity they would get together each other’s shots to see what they are doing. We have several animators working on characters, so while their may be 12 working on Trumper, if one of them creates a flourish that portrays Trumper’s character in a certain way, the others will learn and incorporate that. It’s certainly not a kind of rigid rule book or exact science.

RS: The other thing is, the physics might be different to CGI or drawn animation because we have to stick to the rules of physics. So if somebody falls over, they don’t fall over quickly or slowly but with a weight you can kind of believe in. So we try and make it as recognisable in the human world as possible.