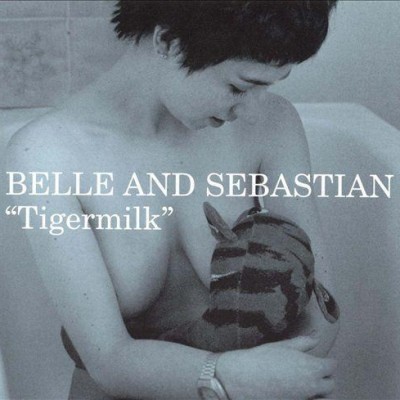 In The All-Night Café, by Stuart David. Published by Little, Brown

Belle and Sebastian are one of those bands surrounded by myth and legend, often of their own creation. Their forming for a college music project, the Machiavellian hand of a former Associate, Stuart Murdoch’s rumoured fondness for heavy metal, Christian fundamentalism, Chris Geddes being only 12 years old when he joined; that’s just a few of the truths, half truths and lies which have been put out there over the years. Add to this the (fictional?) liner notes which accompanied the early releases, and you couldn’t shake the feeling that this was a band who understood the power of music mythology, and who were determined to be in control of theirs.

Stuart David knows what happened, because he was there; one of the founder members of the band formerly known as Lisa Helps The Blind. His latest book, ‘In The All-Night Café: A Memoir of Belle & Sebastian’s Formative Year’ is exactly that, and it deals with many of these myths, not with the intention of debunking them particularly, but simply by telling the truth of his part of the story.

He starts at the very beginning, setting out his own musical influences and dreams, and how they brought him from Alexandria to Glasgow to meet others who shared both. What unfolds is a story of persistence, luck, happenstance and talent which serves as a reassuringly recognisable tale to those who have once been in, or around, bands, and as a handbook for those who still dream about it. The former will shake their heads in disbelief as an amazing story of “where it all went right” unfolds, and the latter will be reassured as to what is possible. Talent, self-belief and luck; they run through the book as through a stick of rock.

Without doubt David knows how to write, as anyone who has read his fiction will know. If you haven’t I recommend his 1999 novel ‘Nalda Said’. As you expect from the man and the band, there’s nothing shocking or sensational in his latest book; if that’s what you’re after head to Led Zeppelin’s ‘Hammer Of The Gods’, ‘Motely Crue’s ‘The Dirt’ or The Krankies ‘Fan Dabi Dozi’. What you do get is actually more involving than any sex, drugs and rock ‘n’ roll confessional; this is all about the music.

Or, at least, it was all about avoiding the usual rock ‘n’ roll clichés. Belle and Sebastian were to be defined as much as what they weren’t as who they were. What bonded the band, and particularly the two Stuarts, was what they stood against.  They may have played on those myths mentioned at the beginning, but they had nothing but disdain for a lot of the extra-curricular activities that bands such as Primal Scream and Depeche Mode, to name two prime examples, were infamous for. They really did prefer a nice cup of tea.

It obviously worked, as their music was so good that it couldn’t be ignored, and as happens all too rarely this was the start of a period where one band’s output was so creatively fecund that every new release brought another high. Think The Beatles between ’65–’67, Prince from ‘Purple Rain’ to ‘Sign of the Times’, The Smiths, and Public Enemy’s first four albums – that’s the company I put them in. This was an incredible period, from debut ‘Tigermilk’ to 2000’s ‘Fold Your Hands Child, You Walk Like A Peasant’, where, when you add in various one-off releases and EPs, you could argue they didn’t record or release a duff track. In four years they went from a vague collection of ideas as to what a band should be, to being one of the most influential and loved bands in Britain and beyond.

While David may be being modest about his role in matters, what he makes clear –  and I think what many have forgotten –  is that it was Stuart Murdoch’s drive, ambition and sheer musicality which was the force behind the band and without him things would not have happened at the speed they did, or in the way they did. Great songs were pouring from him, and everyone else had to try and keep up, with only those who could surviving.  Murdoch had been sitting on ideas for years, with long periods of illness leaving him time to develop them theoretically, and he was convinced if he didn’t realise his ambitions now, perhaps he never would.

As he puts together a coterie of like-minds and musical brothers-in-arms, David is the Steve McQueen to Murdoch’s Yul Brynner, counting off on his fingers as they form their own Magnificent Seven. But this is already reasonably well documented. What is perhaps more fascinating is to find out about the secondary characters who were important to the early days of the band; the flat-mates, long-lost musical collaborators, S&M obsessives, enemies, the NME, and friends and family who all help to fill in the picture. In particular, Stuart David’s developing relationship with Karn is beautifully written, and perhaps lays the foundations for his next musical biography?

But I digress. What fans of Belle and Sebastian will want to know are details such as ‘Dear Catastrophe Waitress’ being one of Murdoch’s first songs, the truth behind the making of ‘Tigermilk’ and the politics of Stow College, and how close the band were to never happening at all. By staying mainly in the background, David is the perfect chronicler as he turns a writer’s eye on the magic and, at times, absurd chain of events that seemed to typify the band’s formative years.

I would say that something was lost when Stuart David, and then Isobel Campbell, left to follow different paths. Those early Belle and Sebastian records had a playfulness and lightness of touch which could be found in both their next projects, Looper and The Gentle Waves respectively. While Belle & Sebastian would go on to make more good music, it was never as fresh, beguiling and uplifting again, and perhaps that’s inevitable. They say you can’t catch lightning in a bottle, yet for a while Belle & Sebastian managed to do so time and time again. For that period there wasn’t a band to touch them, and I’m aware that statement will have many readers shouting at their screens. That’s another sign that this is a special band; when I have conversations about them with other people, to this day it always provokes a passionate response either way. Love them or loathe them, you couldn’t be ambivalent about Belle and Sebastian.

They were the soundtrack to my late-’90s as The Smiths had been to my mid-‘80s, and ‘In The All-Night Café’ is a timely reminder of that era and those people and places. As I’ve been battering away at the keys writing this I’ve been listening to those songs again, some for the first time in a long time. Age has not withered them, nor custom staled their admittedly finite variety. Here are a few of those examples lest we forget. Two classics followed by a rare Stuart David track accompanied by some home footage of Belle and Sebastian doing exactly what you would expect them to, if you believe the hype.

The State That I Am In