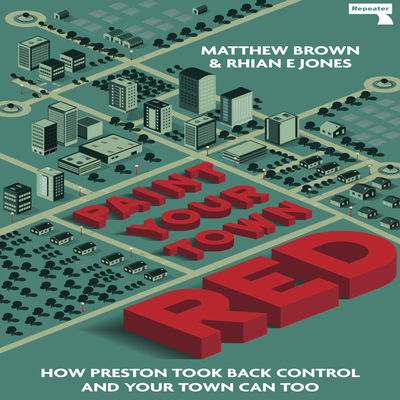 Paint Your Town Red: How Preston Took Back Control and Your Town Can Too, by Matthew Brown and Rhian E Jones
(Repeater Books)

The 2019 General Election was, above all, a harsh lesson in cultural geography. Polls from the start predicted that Labour was heading for disaster, but that never dampened activist spirits because they trusted to what they heard on the doorsteps. In university areas and in London, legions were out campaigning for Jeremy Corbyn. Nobody had met anyone who wasn’t voting Labour. Polls had been wrong before, and everything that activists felt and experienced suggested they must be wrong again.This trick of perspective was doubly cruel because there was reality in the illusion. Where activists congregate, Labour was racking up (effectively pointless) majorities; the problem lay elsewhere, in “red wall” seats untouched by radical subcultures.

While it’s easy to reduce Johnson’s victory to the Brexit psychodrama, that disguises an even harsher truth about contemporary left-liberalism. Everywhere you look, progressive cultural politics saturates trendy areas while leftism shrivels to a rump in the heartlands of traditional social democracy.

The trouble is that the Left’s new core vote in big cities, tech towns and university campuses will never constitute a political majority. To challenge for power, leftism thus requires its own “spatial fix”. However, activists are caught between two opposing impulses. Some think the left needs to go “over there”, to the uncharted ex-Labour housing estates. Some, by contrast, believe that change begins where you are, with progressive community beacons in areas like Glasgow’s Southside or London’s Shoreditch.

Either way, there is a consensus that the search for optimism must begin from localism and communities, space and place. This new book, endorsed by former Shadow Chancellor John McDonnell, condenses this post-Corbyn wisdom. It promises progressive policy responses to the post-Thatcherite hellscape of shuttered high streets, declining seaside resorts and dejected coalmining villages. Its central concept, “community wealth building”, has considerable cache in trade union officialdom, academia and NGOs.

While the concept suffers from a saturation in jargon (“anchor institutions”), advocates say it represents “extreme common sense”. And that is hard to contest. Few would oppose the book’s central proposal of “progressive procurement”, which suggests spending public money to help local enterprises and increase local wages rather than letting cash leak out of the region. Equally, few now defend the old model of regional development, which meant lavishing money on inward investors who would take the money and run. The case for alternatives is barely contentious anymore. Calling it “guerrilla localism” is a bit on the nose, but “extreme common sense” captures it well.

The Preston Model, which occupies much of the book, demonstrates the benefits of shifting procurement from external suppliers to resident producers and businesses. Led by a progressive council bureaucracy, Preston has achieved heartening results under straitened circumstances. Poverty and joblessness have dropped. Civic pride has been restored. The town has been voted one of the UK’s most improved. Best of all, this is happening in a heroically unfashionable region, with not a Waitrose in sight. The benefits are obvious and many, such as North Ayrshire Council in Scotland, are understandably excited.

However, the book runs into trouble when it strays from these modest conclusions to suggest an overarching strategy for working class leftism. At times, the authors seem perplexed that talk of anchor institutions and progressive procurement isn’t galvanising local activism beyond the existing bureaucracy. But these policies have limits. Worthy thought they are, it’s excessive to portray procurement specialists as heirs of the Paris Commune. Preston represents best practice in the top-down business of regional development. No bad thing, but the book suffers by exaggerating the political stakes. Local doesn’t always mean authentic and grassroots.

In truth, the post-Corbyn localist turn makes a virtue of necessity: it is a traumatised response to the left’s defeats and failure to achieve power at the national level. This is sometimes frankly admitted. “One of the obvious strengths of localism,” the authors observe, “is that it is already producing results, while attempts to develop a global or even national alternative to the status quo through an electoral path have not yet had significant success.” However, the implications of this acknowledgement are not explored.

Naturally, everyone should try to make change where they can rather than succumb to fatalism. Even under Conservative hegemony, alternatives exist: the book makes this case well. Yet the public’s reluctance to embrace localism isn’t just about dejection or false consciousness. There is a measure of Gramscian “good sense” here. While almost everyone will welcome these policies, few will invest precious spare time towards local initiatives because the stakes are too low. By contrast, Scotland’s indyref and (like it or not) Brexit show the masses will mobilise when the stakes appear sufficiently serious. Peripheral communities and towns feel their agency is strongest at the national level, and that impulse isn’t entirely irrational.

While many leftists consider “think global and act local” to be the last word in strategy, the truth is that concentrated power lies with the nation state. This has been proved, once again, by the pandemic and the furlough schemes: when it wants to, the state can lead in the total reordering of society. The old ideology of “globalisation”, in that sense, was the real false consciousness. By contrast, the already shrivelled power of local authorities has been further eroded by a decade of austerity. Preston shows there’s no excuse for fatalism or for clinging to outmoded Blairite thinking on regional development. That’s an important conclusion, but a limited one.