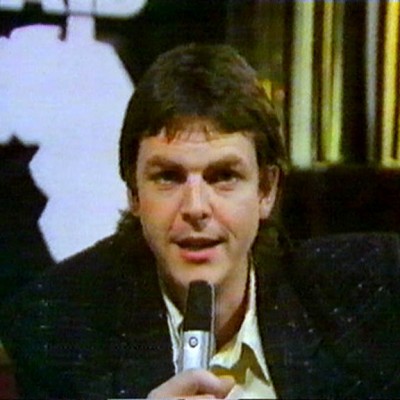 As a self-confessed magazine addict, music journalist and editor Mark Ellen has been one of my constant companions through life, one of those who helped guide and shape my musical tastes and reading habits. From my early encounters with the NME and the heady pop days of the early ’80s which were documented in Smash Hits, (a publication which many ‘serious’ music fans stole from their wee sisters, or hid between their inky of choice as if it were some saucy top shelf title), Ellen’s wry observations and puncturing of the pompous lent a healthy cynicism to accompany the excitement at discovering thnext big thing. He was there for the early days of Q (when it was quality) and when I started to seriously immerse myself in classic rock and pop in my early 20s, approaching it with an earnest and almost academic zeal, I was guided by his next magazine, MOJO.

In an ever-changing world, he continued to be involved in various publications that chimed with the times. Then came The Word, and it was good. The magazine tried to defy the widely predicted death of the printed word, following the template of quality publications such as The New Yorker or Vanity Fair by including long form essays, eschewing the ‘star rating’ system for well-argued criticism, and employing some of the best writers available. They didn’t take their readers for granted or insult their intelligence; they conversed with them rather than talk down to them. When it closed it wasn’t exactly the day the music died, but it could be said that it was the day that the meaningful music press died as people increasingly looked for their criticism on-line. It seemed that Ellen’s influence on my musical tastes was over, and there would be no more tales of eating rare steak in front of a quietly furious Chrissie Hynde, or what Van Morrison’s roadies would do with his bag of favoured ‘gob-irons’ before he went on stage. You know how it felt when your favorite band split up? For many people, it felt just like that.

If the above paragraphs mean nothing, then perhaps Mark Ellen’s new book Rock Stars Stole My Life is not be for you. If any of it does, then I urge you to get your hands on a copy. It sets out Ellen’s life-long love affair with music; the writer looking back with a mixture of bemusement, joy and wonder. Ellen is rock and pop’s version of Woody Allen’s Zelig; a character who seemed to appear in and around many of the key events in music of the last 40 years as its’ wide-eyed chronicler. He was there for the golden years of the NME, at the coal face of the pop explosion of the early ‘80s, presented The Whistle Test, stood in for John Peel when millions were listening, started the Q awards, spent days with Lady Gaga, even fronted Live Aid for heaven’s sake. Ellen always reported what was happening with more than a hint of incredulity, something time has gratifyingly not lessened. Rock Stars Stole My Life is bookended by the 2012 tale of Rihanna’s attempt to play seven countries in seven days, flying on a Boeing 777, accompanied by fans, bloggers and journalists, one of whom is our hero. What unfolds typifies what happens when musicians lose touch with those who buy their records. You can almost hear Ellen’s eyebrows hit the ceiling and his jaw clunk on the floor as he takes in the madness that unfolds all around him.

Ellen belongs to that group of people who have had their life defined by the music they listen to and the stories behind the songs. He understands those for whom the highlight of their teenage years was the latest edition of their favourite magazine ‘hitting the shelves’, desperate to have news on their musical heroes. Those who never washed their own mug, yet looked after their vinyl collection as if worried it was going to catch the common cold. The people who can’t talk to their best friends when they are going through any personal trauma, but will happily discuss the merits of which is the best Johnny Marr guitar riff for hours on end. What has always made him appealing as a journalist and presenter, and which runs through the book, is his wry sense of humour and the knowledge that this obsession of his, which he shares with millions of others, is all a bit absurd and very often visits the realms of the ridiculous.

There are many examples to back this belief up. Aside from Rihanna’s legendary lateness there is his own brief time as a member of Ugly Rumours, fronted by one Anthony (“Call me Tony”) Blair, being threatened with violence by Elvis Costello’s manager Jake Riviera, the realisation that his hero John Peel felt threatened by him so refused to go on holiday, everything about Live Aid, everything about Lady Gaga, and that only touches the surface. There’s an astonishing encounter with Jimmy Page and Roy Harper which is worth the price of the book alone.

I have devoured music biographies and memoirs for many years now. The best of them include Nick Kent’s ‘The Dark Stuff’, Jon Savage’s ‘England’s Dreaming’, Simon Reynolds’ ‘Blissed Out’ & ‘Rip It Up & Start Again’, Charles Shaar Murray’s ‘Shots From The Hip’, Greil Marcus’ ‘In the Fascist Bathroom’, and various collections of music journalism, including ‘The Faber Book of Pop’, ‘Love Is The Drug’ and ‘The Sound & The Fury’. What makes Ellen stand out – and which he shares with his friend Danny Baker – is obvious joy for life and language. Both men take their music very seriously but they refuse to take life too seriously, or at least their own. As I read the stories that unfold in Ellen’s book it was as if he was the central character in Talking Heads’ ‘Once In A Lifetime’, wondering, “Well, how did I get here?”

This is not one of those books which tries to say “it was better in our day”, partly because today is still his day. But Ellen makes it clear that nothing is really new, only the drugs and the haircuts change. However, there is an interesting underlying point to consider: if we don’t give a value to something it is difficult to give it worth, and when people expect to get their music for free, what is their investment in it – financially and emotionally? The contrast between Ellen’s early reminiscences of literally wading through mud to see bands play in a field and ‘a Rihanna fan’ choosing not to watch a free gig which they have been flown around the world to because someone is sitting in their seat, is telling.

There comes a time in many music obsessives’ lives where the relating of stories about their favourite bands is almost as pleasing as discovering anything new. That’s why music bios sell so well. We are always interested in what a shark was doing on a Led Zeppelin plane, how Stevie Nicks took her cocaine, and if David Bowie really survived on a diet of milk and raw peppers. It doesn’t make the music any better, but we thirst to know as much as we can about the bands we love, and those we loathe. Reading Rock Stars Stole My Life was like sitting in a pub with a good friend you haven’t seen in a while as he recounts some incredible tales. I can imagine Ellen as he wrote this, shaking his head and with a grin on his face, not only because he couldn’t believe what he’s seen and heard, but because, to deliberately mis-quote Neil Tennant, another friend and former colleague of his, “he never dreamt that he would get to be the creature he was always meant to be”. Read all about it.