Bill Hicks has been derided as an anti-corporate fanatic, UFO devotee and gun fetishist. But what he would really have hated is being described as the lost saviour of stand-up, writes Allan Brown 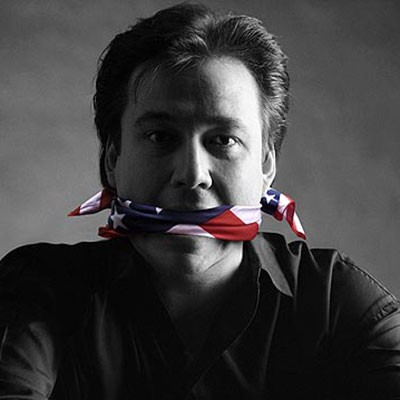 “TO ME,” Bill Hicks says in Love All the People, the recently published anthology of his letters, lyrics and transcribed routines, “the comic is the guy who says ‘Wait a minute’ as the consensus forms. He’s the antithesis of the mob mentality. The comic is a flame – like Shiva the Destroyer, toppling idols no matter what they are. He keeps cutting everything back to the moment.”

For the writer considering Hicks’s legacy a decade after his untimely death this is a fortuitous comment to chance on. Criticising the work of an artist who died at the age of 32 is not a comfortable experience, even if a hardened consensus exists to put the opposing view passionately, nay obsessively. The remark feels almost as though Hicks were granting license from beyond the grave, insisting that sentiment be put to one side and his work weighed with the clear-sighted rigour it strove to articulate. Hicks would be astonished to discover he’d become a comedy idol – having spent so much of his career on his so-called Flying Saucer tour, appearing before handfuls of rednecks in obscure Southern towns – but he has; we must assume, therefore, that he’d be the first to insist the devil’s advocacy be used against him. Trust me; it’s what he would have wanted.

It’s impossible, in fact, to discuss Hicks sensibly without accepting that his death, rather than his work, is the central defining act of his reputation. He got out before the inevitable compromises of age and career-building could seep into the foundations of his comic edifice. No matter how high-minded or ultramontane Hicks was (and he was, very) he would have capitulated eventually; he was an ambitious man and by the end of his life, one disenchanted with stand-up comedy: “I’ve been doing this 16 years, enjoyed every second of it” he told the audience at the Laff Stop in Texas, a year before he succumbed to pancreatic cancer. “Every plane flight, every delay, every cancelled flight, every lost luggage, living in hotel rooms, every broken relationship, playing the Comedy Pouch in Possum Ridge, Arkansans, every fucking year. It’s been great, don’t get me wrong …”

And so, like James Dean and Marilyn Monroe, or more fittingly Lenny Bruce and John Belushi, Hicks remains forever at his comic zenith, clad forever in outlaw black and chain-smoking and howling his fury at religious zealotry, at cultural Puritanism and corporate hypocrisy (“Hey, if anybody in the audience is in advertising or marketing, do us all a favour – kills yourself. No joke here. Just kill yourself”). For Hicks there simply wasn’t the time to take Hollywood’s dollar, as Steve Martin, Eddie Murphy, Bill Murray, Chris Rock, Dennis Miller and many others had done; nor was he given the chance to be overwhelmed by irrelevance, as Comedy of Hate contemporaries like Andrew Dice Clay, Will Durst and Dennis Leary were. To adapt one of the musical analogies he favoured, Hicks was Never Mind the Bollocks with no Great Rock and Roll Swindle to follow.

But it isn’t particularly interesting to claim that audiences still love Hicks because he’s dead, nor is it particularly true, otherwise the Sam Kinison revival would be with us now. There is clearly something else at work in the cult of Hicks, the cult which allows him to be drawn posthumously as comedy’s great lost visionary, its sacrificed saviour. Here’s my theory. Without doubt, stand-up comedy is the lowest, most complacently smug and trivial art from ever created. Paying a stranger to say funny things is a profoundly depressing transaction. Deep down, all fans of stand-up comedy know this and secretly hate themselves for affecting to care about anything Ed Byrne or Alan Davies or Ross Noble have to say about their girlfriend’s can-opener.

Hicks, however, provided his audience with a baptism of credibility, with the benediction of righteous social anger. His comedy seemed to be about things that mattered – the first war in Iraq, for instance, or the illogicalities in America’s attitude to pornography: “The Supreme Court says pornography is any act that has no artistic merit and causes sexual thought. No artistic merit. Causes sexual thought. Sounds like every commercial on television, doesn’t it? You know, when I see those two twins on that Double Mint commercial… I’m not thinking of gum. But I am thinking of chewing.”

Time and again in Love All the People commentators and essayists discuss the “purity” of Hick’s comic vision or his “fierce intelligence”. To underline his belief that he was a martyr to truth, with all hope of commercial success vanquished by his stringent refusal to compromise, Hicks often ended his shows by being “assassinated” by three sound-effect shots. It’s certainly evident from the assembled routines and marginalia that Hicks was mentally alert, energetically observant, precociously intelligent – but intelligent, let’s not forget, for a stand-up comedian. Being cleverer or more articulate than Ben Elton is something of a hollow victory. So many of Hicks’s forceful insights rely for their impact on the inevitably one-way nature of the discursive exchange, on the fact that audiences are not normally in the habit of standing up and saying: “Excuse me, when you claim that the pro-life lobby is inherently evil, isn’t it the case that…”

There is little in Hicks’s much-vaunted intelligence, in fact, that would withstand debate from a moderately bright humanities undergraduate. Nonetheless Hicks’s audience will love him forever for his intellectual flattering of them. One of his most famous routines concerns the non-occurrence of the Second Coming. Jesus, Hicks contends, refuses to return to earth because his followers wear crosses round their necks. “You think when Jesus comes back he’s gonna want to see a fucking cross, man? It’s kinda like going up to Jackie Onassis with a rifle pendant on, you know. ‘Thinking’ of John, Jackie. We love him. Just tryin’ to keep that memory alive, baby.’” The routine has great comic logic but it shows ignorance of Catholic theology and Jesus’s own rationale that it’s virtually worthless as an insight.

Much the same could be said for many of Hicks’s arguments. Pornography is not an emblem of the adult right to choose, it’s the product of an industry as corrupt and coercive as the multinationals he so consistently attacks; drugs are not stigmatised because they cannot be taxed but because, unlike tobacco and alcohol, their harmful effects came to light in an era when they could be quantified; the US government is not engaged in the project of mass intellectual subjugation because only very silly, over-stimulated (and conspicuously un-subjugated) people hold such a belief. Since September 11th I’ve heard several people say: “It’s a shame Bill Hicks isn’t around to talk about this.” It’s easy to guess, though, what his take might have been: gleeful, knee-jerk anti-Americanism. And, er, that’s it.

The greatest problem with Hicks however, is not that he duped his audiences into believing themselves slightly cleverer than they actually were; the greatest problem with Hicks is his mysticism. In a 1992 questionnaire he revealed his motto to be ‘Leg go and let God’. Hicks was raised as southern Baptist (“Bill is very funny,” the pastor told his mother “but you might want to look at how you raised him”); by adulthood this lite-fundamentalism had mutated into something altogether more sinister, without ever quite resolving what exactly it was. The possibility that UFOs would take us to a better planet had something to do with it, as had the spiritual properties of hallucinogenic drugs, the taking of which he described as “squweegeeing the Third Eye”. “Take all that money we spend on weapons and defence each year,” Hicks often concluded his shows “and instead spend it feeding, clothing and educating the poor of the world and we could explore space, together, both inner and outer, for ever, in peace.”

Taken together, Love All the People paints a bemusing portrait; of a rationalist empiricist who believed our future lay on Mars with little green men; of a liberal humanitarian who fetishised drugs, guns, pornography and the use of the terminally ill as stunt doubles in Chuck Norris movies; a staunch baiter of American network television who somehow managed to appear on NBC’s Letterman show eleven times; of an anti-corporate fanatic whose work, through posthumous album, video and literary releases like Love All the People, has been exploited as vigorously as that of Hendrix, Presley and Lennon.

The Hicks lobby, which is numerous and vocal, would take these contradictions as evidence of Hicks’s depth and complexity (“I’m a dark little poet,” as he said of himself). The less excitable, however, might see Hicks as he emerges from Love All the People: as a moderately astute malcontent with a flair for sarcasm and a curiously inconsistent attitude to the business in which he was involved. He would have hated to witness the anti-hagiography his followers have constructed round him, to be sainted merely because he didn’t live long enough to go off the boil. As a loather of consensus, Hicks’s great artistic tragedy is that he became the cause of one, and just by being slightly funnier than Dennis Leary.