Author Mick Kitson tells Sibylla Archdale Khalid how he conjured Sal, one of the most compelling literary characters of 2018 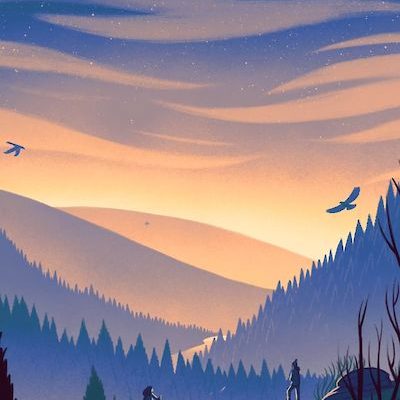 Originally one half of ’80s pop band The Senators along with brother Jim, Mick Kitson left the music industry to become a journalist, and then a teacher in the west of Scotland. However, when talking about his debut novel, Sal, he makes it clear that the last thing he was interested in as inspiration was his own biography. “I didn’t want a character who was a thinly disguised version of me,” he says. “So I sort of imagined someone who’s the opposite. Different age, different sex, different life experience”. What he came up with is the fierce thirteen year old, Sal, who narrates the book, and who is on the run, with her younger sister Peppa, from a torrid home life. Hiding out in Galloway Forest, Sal and the spunky, bubbly Peppa hunt rabbits and build shelters in an attempt to survive. Told from Sal’s perspective, the novel doesn’t show its cards all at once, as Sal focusses on her next moves and tries to suppress what she’s running from. What is clear, though, is that Sal is a survivor. “Her character is the opposite of me as well. She’s brave and resourceful and she doesn’t moan.”

She’s also a fantastically engaging narrator, and it’s her dry, honest voice that hooks the reader in and makes Sal so compelling. Considering Kitson, as he’s the first to point out, doesn’t have all that much in common with Sal, the fact that she is so convincing is impressive. Was he intimidated by writing from such an off-centre perspective?

“Not really because she’s not a typical teenage girl. When she started to take form in my mind I started to hear how she’d spoke. I could hear what her voice was like; this slightly flat, monotone way that she speaks, because of her experience. In a way, she just started talking and I wrote it down.” Kitson’s teaching experience means he has spent a lot of time talking to young people from the west of Scotland anyway, but he is insistent that this wasn’t significant in his choice of subject. “Writing should be about imagination and not writing about yourself. There’s an adage, write what you know, but I think the absolute opposite. If you do you’ll write dull tedious things about yourself. Great writers imagine.”

There was also a particular appeal in writing from the perspective of a thirteen year old.

“It’s what literary critics call a liminal age. It’s where you’re neither a child nor an adult but you’re looking both ways. I have compared it to being in your mid to late fifties in some ways; you’re looking back and looking forward, looking to a different way of living.”

There is an adage, write what you know, but I think the opposite. Great writers imagine.

Despite having a young narrator, the book is resolutely adult in its themes. Without giving too much away, Sal and Peppa’s flight to the forest forces them to encounter the brutality of surviving in nature, becoming adept at skinning animals and treating a nasty bite from a fish. And that’s without taking into account the life they’re running from, which included abuse and neglect. These are difficult themes for any writer to tackle, let alone one writing his first book.

“I did hesitate, particularly with the accounts of Sal’s abuse. If you’ve never experienced it, and I haven’t, it’s a hard thing to write about. But I let her talk about it in her detached way. She’s never that graphic and it doesn’t concentrate much on her feelings, it’s much more on the practicalities of what’s happening, which is partly to get across that idea that in those moments of trauma people detach from their sense of self and become almost an observer.”

So dark is the book, it’s easy to wonder whether Kitson was driven by more than artistic pursuits. Throughout the novel, the primary threat are the social and judicial services, who Sal fears will cotton on to her and Peppa’s predicament and split them up. Whilst not overtly political, this external threat certainly implies some level of socio-political fervour on the part of the writer.

“I don’t think I was conscious that was going on when I was writing it. I wanted to write a novel about ordinary people – I didn’t want to write about rich people in a smart apartment. I was interested in this idea that even today there are still kids up and down the country who have been utterly let down by the wider world. A lot of the things in the novel are about parenting and how we look after children; Sal and Peppa are two kids who have been left down by every single adult. So I suppose, actually, in that sense it was political.”

Along with this looming institutional threat, the other huge presence in the novel is Scotland itself. Although he now lives there, Kitson was born in Wales and grew up in London, so it seems striking that he would set this novel of adolescence far from where he spent his own formative years. Still, having lived and taught there, he is no stranger to Scottish teenage life and has a familiarity with the particularities of the accent. The landscape, too, with its rugged, isolated woods, was a huge draw. ‘You can go there [to Galloway forest, where the book is set] and you can walk up into the woods, and you cannot see another person for miles and miles. Like lots of places in Scotland, it’s got this otherworldly quality to it – you can really believe there are fairies! You come across these glens in woodland and understand why fairies and witches are such a big part of Scottish culture’.

This otherworldly quality seeps from the landscape of the book into its plot; Sal and Peppa encounter an aging woman in the woods who has cut herself off from regular society. This is partly what makes the book so intriguing, as it glistens its gritty social roots with a ghostly, unsettled atmosphere. Someone not enchanted by this, though, is the book’s narrator. ‘She’s so practical, and when she starts to experience weirdness she doesn’t really know how to cope with it. She has no truck with anything iggy-wiggy’.