A former UK ambassador to the EU lays out the clusterfuck that follows a retreat from reality, writes Ronnie McCluskey 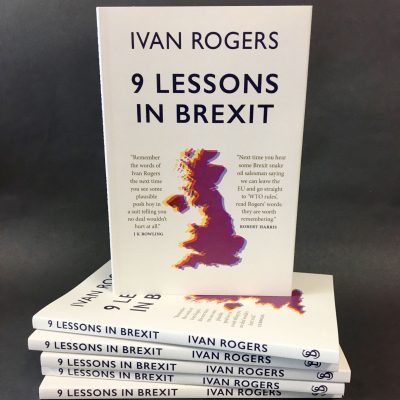 When HBO’s dramatisation of the Brexit referendum was announced, with Benedict Cumberbatch set to play the scheming Vote Leave mastermind Dominic Cummings, my response, presumably like that of most people, was “too soon”. Not in the sense that the whole thing is in any way too raw, but because a filmic adaptation of events so recent, and whose injurious aftereffects are still playing out in real time, could only ever seem premature. Despite my gut reaction, I downloaded the film and recently finished reading the pacy 600-page tome on which it is based, All Out War by Tim Shipman. It was an entirely enjoyable and enlightening read, recounting the various machinations, back-stabbings, polling and politicking that defined that landmark referendum. With enviable access to all the main movers and shakers in the process, Shipman has penned the definitive account of the lead-up to June 23, 2016. Mostly cold-eyed but occasionally humorous, it succeeded in communicating the reasons why the referendum came about – as well as why it was won and lost.

Though we are all unavoidably affected to some degree by the Brexit fallout, I intended to put the shitshow out of my mind for a while after siding the book away; however just when I thought I was out, the UK’s former ambassador to the EU pulled me back in: I picked up Ivan Rogers’ newly-released 9 Lessons in Brexit and, since it’s a slim 96-page book (whose Introduction starts on page 9 and whose jacket carries praise from the aforementioned Shipman), I read and tried to digest the essay in two sittings.

There aren’t many people in a better position to explain the monumental cluster fuck that is Brexit, and Rogers is in a succinct and waspish mood throughout this short work, his words as precise as cut glass. He sets out his stall in the Introduction, remarking that “debates about fundamental questions of direction need to be anchored in facts, not fantasies. And ours has suffered since the referendum from a surfeit of the latter, from a near total inability to understand the interests, incentives and motives of the people with whom we are negotiating a divorce.”

In his element deconstructing the typical soundbites of Eurosceptics and hard Brexiteers, Rogers can nonetheless burn both sides, as when suggesting that the arguments of those craving a second referendum don’t cut muster: “Second vote campaigners seem either remarkably coy about whether they want to remain on the terms Cameron negotiated or whether some great new offer will be forthcoming – notably on free movement of people – from EU elites supposedly desperate to give us something new which they were not prepared to give to Cameron. Let me puncture that fantasy first: no such offer will be coming.”

The outcome of the referendum, as we know, stemmed in large part from a widespread dissatisfaction with EU bureaucracy (and, as in Trump’s election victory, a revolt against so-called elites wherein the vote itself acted as a punchbag for citizens’ stress and discontent), our inability to control immigration and a pathological desire to “take back control.” But as Rogers points out, we are not the masters of our own destiny Gove, Johnson, Farage, Hannan and the rest implied we would be. “There will, under no circumstances, be frictionless trade when outside the Single Market and Customs Union. Frictionless trade comes with free movement of people.”

What’s more, “market access into what is now their market, governed by supranational laws and courts of which you are no longer part – and not, as it used to be, yours – is worse and more limited than before.”

An edited version of a lecture Rogers gave at Liverpool University, his prose has a conversational rhythm and flow that compels you to read some of the sentences aloud. The impression is that each subject has been placed under the lens of a highly powerful microscope. Chapters (or lessons) fly by at a clip, forming a carpet of truth bombs related to the negotiating process and possible trade-offs, the perspective of the EU member states in the unfolding saga, common misconceptions peddled by Brexit advocates, the need to understand fundamental differences between bargaining as an EU state and as a “third country” and much else besides.

9 Lessons is logical to a fault (and to the point of bluntness) and without sentiment, although even the erstwhile ambassador can occasionally miscue, as when refusing to concede that changing, well, pretty much anything meaningful legislatively from within the belly of the bureaucratic beast was virtually impossible: “In ‘taking back control’ of our laws and leaving the adjudication and enforcement machinery of what used to be our ‘home’ market, we are privileging notional autonomy to make our own laws over real power to set the rules by which in practice we shall be governed, since departure from norms set by others when we are not in the room will in practice greatly constrain our room for manoeuvre.”

Point taken, you might say, but just how much room for manoeuvre had there been? Judging from Cameron’s protracted renegotiation attempts, very little. Rogers doubtless knows this: just half a page later he talks about us (meaning the UK) now struggling “to achieve even observer status in the setting of policies which will have a major impact on our national life.”

Highlighting the fatuousness of Brexiteer arguments, which he derides as “beyond incoherent”, is the author’s stock in trade, and this is evidenced by a lucid passage at the start of Chapter 3: “One cannot seriously simultaneously advance the arguments that the EU has morphed away from the common market we joined, and got into virtually every nook and cranny of UK life, eroding sovereignty across whole tracts of the economy, external and internal security, and that we can extricate ourselves from all that in a trice, recapture our sovereignty and rebuild the capability of the UK state to govern and regulate itself in vast areas where it has surrendered sovereignty over the previous 45 years.”

Where Shipman’s book forensically documented the referendum process, Rogers is more concerned with looking forward – or trying to amid the endless turmoil of the non-negotiation. He discusses May’s fatal error in invoking Article 50, “before much of the serious work to look at where we wanted to land post exit had happened”, likening it to the member states scoring two quickfire goals soon after the opening whistle; he also hints at the formidable and ominous machinery of the EU without labouring the point, leaving one queasy at the prospect of trying to win any sort of concession from their unpersuadable power brokers. In tipping her hand and playing to the Tory gallery with her first flush of power, Rogers suggests, May caused the 27 member states to form an ideological bloc and “cleverly use the pressure of the clock and the cliff edge to dictate the shape of that change.”

Given the seriousness of the subject matter, the humour – when it comes – can be jarring, although it’s a welcome tonal change. The 7th lesson is “Beware all supposed deals bearing ‘pluses’”, and each post-exit framework (Canada +, Norway +…) is given short shrift by the guy who, after all, dealt with both Presidents and their teams at the outset of the process. No Deal + is singled out for vituperative excoriation: “No Deal + is brought to us courtesy of all the people who declared that a great free trade deal would be struck before we even left because the mercantile interests of key manufacturing players in Member States would prevail against the pettifogging legalistic ivory tower instincts of the Brussels ayatollahs… I don’t know what tablets these people are taking, but I must confess I wish I were on them.”

For such a short book, 9 Lessons is dense with insights and cogent arguments and I won’t attempt to replicate them here. Suffice to say it is worth reading if you are at all interested in the lay of the land and if, rather than loyally keeping pace with the daily updates in the newspapers, you prefer to absorb a quick, well argued, well informed essay on the Brexit trade nightmare as it currently stands. It’s of course also useful to know more about the inherent contradictions in many popular claims (“No deal is better than a bad deal”; “We can trade solely on WTO terms”) preached by hardliners.