As her new collection of short stories is launched, Meaghan Delahunt talks to Naomi Richards about the art of writing 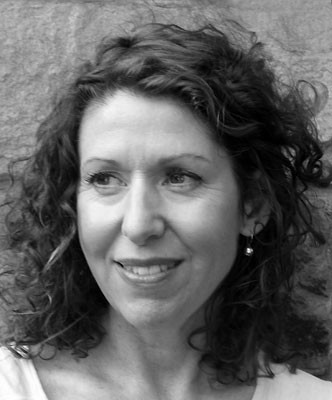 Sipping tea in a quiet corner of Joseph Pearce’s bar at the top of Leith Walk, Meaghan Delahunt exudes warmth and focus. Friendly and engaging, she has vibrant blue eyes, full of awareness. She speaks with a slight Australian accent, but in fact is the daughter of many countries. Meaghan has lived in Scotland for over two decades, but has also worked in Athens and on the Greek island of Naxos. This broad perspective informed her new collection of short stories Greta Garbo’s Feet, written over a twenty-year period. These diverse stories explore human experience, often at the margins, and take risks in both content and technique. The characters range from a small girl learning to dive off perilous rocks in Mexico (The Girl from Quebrada) a drunken priest with a hazy past (The Mani) an old lady with a voracious sex drive (Enough about Sex) and a man in Melbourne experimenting with narcotic flowers to ease lovesickness (Datura).

The extraordinary title story Greta Garbo’s Feet, which won the best Australian short story award in 1997, looks at a transgender man’s obsession with the image of Greta Garbo, particularly her shoes. This story kick-started Delahunt’s success as a writer. Although she later went on to write novels, she always had other short stories brewing away, which were widely published and broadcast. But this is the first time these tales have been brought together as a collection.

Delahunt has written three novels and taught creative writing at St Andrews and Stirling universities. Her first book, In The Blue House, (2001) a fictionalised account  of Leon Trotsky’s life and romantic complications in Mexico with artists Frida Kahlo and Diego Rivera, carried off a string of awards. There’s perhaps a taste of this in one of the collection’s finest short stories, The Last Days of Lev Davidovich, which wonderfully combines Trotsky’s gruesome murder with endearing details such as his caring for rabbits.

NR:  You seem very interested in collaboration with other artists. Could you tell me more about that?

MH:   Visual art is something that has always fascinated me.  I ’m  currently working with the talented Scottish actor and singer, Tam Dean Burn and we’ll be reading two of my short stories from Greta Garbo’s Feet at  the Edinburgh Independent Radical Book Festival on the 31st of October.  Tam is wonderful with voices and has a tremendous range. He’ll be doing a  whole lot of voices in  the story Ten Days That Shook the World, which is set during the  Scottish  referendum. Tam’s personas will  include John Reed, whose account of  the Bolshevik Revolution inspired the name of the story. I was rehearsing with Tam over in Glasgow just before our interview. I’m interested in future collaborations between  movement, voice and writing. In the same way it connects with mind, body and spirit.

NR: You have a very holistic approach to creative writing.

MH:  This is what I feel is missing in the creative writing industry –  a separation from the inside ( the process) and the outside ( the product). Too much of  teaching creative writing  is seeing it  as a matter of technique, which produces competent stories, but little beyond that. You have to be able to follow the wildness of the mind. What as a creative writing teacher you are really doing is helping the student to trust themselves.

NR: I read that you do yoga and creative writing workshops. That’s an interesting combination…

MH:  Yoga and meditation are an important  part of my life. I meditate before I write. Recently I’ve been doing  collaborative workshops, combing yoga, writing and art. Yoga teaches us as writers to overcome obstacles, to persevere and to keep the mind and body connected. As a writer you have to be very much in the present, always mindful. Yoga also helps you  to  be able to look at the past with non-attachment and this can help you develop your personal vision.

NR: Also on your website you mention the writer having  the chance to live twice. This reminds me of Eudora Welty who said, “ Wherever you go you meet parts of your story.’’ Tell me more about writers living twice…

MH: As a writer you can use all your experiences. You can explore who you might have been or still could be.

NR: So writing can be transformative?

NR: Your stories are very international. What are your influences?

MH: As a white Australian you come from an immigrant culture. My parents are Irish Australians. Melbourne has the third-largest Greek population outside of Greece. It’s a very international, multi-cultural city, which I grew up in. This ties up with the Buddhist views of the world, of connection, of seeing things as one.

NR: I was particularly impressed by your stories set in Greece. I had a feeling you knew it well.

MH: Certainly Greece feels like my spiritual home. My most recent novel To the Island is based in Greece. I am still learning Greek.

NR:  Due to the international scope what do you think most tightly holds Greta Garbo’s Feet together as a collection?

MH: The stories were written over a 20 year period. My first short story was published 25 years ago. What joins them together is the writer’s sensibility.  What excites me about publishing with Word Power Books is that bigger publishing houses tend to have a distrust of the short story.  They want to turn them into a novel, by insisting on a themed collection, which can seem a bit forced rather than the writer being able to make their own creative  leaps and follow their pre-occupations and obsessions.

NR: So in terms of craft, what starts you off with a story?

MD: It could be an image, a fragment, a colour. I follow it and see where it goes. There’s a lot of intuition in writing.

NR: In the introduction to Greta Garbo’s Feet Kirsty Gunn talks about  your “literary  compression”….

MD: Yes, I prefer not to write stories over 5,000 words. I like the compression of a writer like Lydia Davis, where every word means something. A short story is all about allusion, tension, movement, imagery, resonance. It is about how hard the language is working and how much space you give to the reader’s imagination.

NR: With Lydia Davis there’s sometimes the problem of where to put her. Is she is poet or a short story writer? Do you think there is a place for combining aspects of poetry with short stories?

MD: Yes, I used the haibun, a Japanese form where a haiku is followed by a paragraph in a story just as early in Bhopal [written last year on the anniversary of the tragedy]:

to the late world

NR: Kirsty Gunn said your short stories are “fabulously free of the narrow strictures of plot and character development.” Is this something you are consciously aware of as a writer?

MH: I don’t believe in the tropes of the creative writing industry, such as narrative arcs or thinking of plot or conflict or having to know everything in advance. Grace Paley has a short story about  that called Conversations with my Father. Two of my favorite quotes from that story are: “plot, the absolute line between two points that I’ve always despised” and “Everyone, real or invented deserves the open destiny of life. ” Writing a short story should not be  like a car assembly, fitting the parts  together. To write you have to be  courageous, to  not join up all the dots. The writer’s job is to evoke something, an experience and  the  reader fills in the gaps.  If you follow all the so-called ‘rules’ of writing, you get something schematic not organic and intuitive. Story writing is actually quite a messy business.

NR: Tell me more about your processes…

MH: Writing stories is a process that takes place over years. I like to have a sort of talisman. When I was writing The Grip, I kept a golf ball by my side. When I was writing Greta Garbo’s Feet I had the famous still of Greta Garbo by Clarence Bull from the  Fitzmaurice film Mata Hari.   After I’ve been writing I always like to get the  bits or fragments of work on the floor to help me to decide what to take out. You have to trust as a writer that you will get there. Datura had 39 drafts, to make the story work. Each draft was markedly different from the other.

NR: I noticed, such as in The Mani, there are details mentioned twice, about what is in the back of the priest’s  car, which are never returned to.

MH:  Yes. That reminds me of Janet Malcolm’s book Reading Chekov, the importance of the unexplained detail, that ultimately people are mysterious.

NR: What about the point that Chekov made in one of his letters: “One must never place a loaded rifle on the stage if it isn’t going to go off. ” Isn’t it wrong to make promises you don’t mean to keep?

MH: That I think is more applicable to writing for the stage. It is important not to tell it whole so that the reader can fill in the spaces.

NR: You often explore notions of gender and assume the voice of a man. What draws you to that?

MH: I like exploring and using different voices from my own, to get away from me. Virginia Woolf said at the level of the unconscious we are all androgynous.  But when men  write women  we tend to heap  praise on them for being  able to portray a woman, while women who write men equally well,  we tend not to praise.

NR: Talking about gender, I never realised Garbo was so mannish.

MH: Yes, she really did say: “I have been smoking since I was a small boy.”
Meaghan Delahunt will launch ‘Greta Garbo’s Feet & Other Stories’ on Saturday October 31st, 8.30 at the 19th Edinburgh Independent Radical Book Fair: Out of the Blue Drill Hall, 36 Dalmeny St, Leith, Edinburgh. Actor Tam Dean Burn will join her for a performed reading of her work. Admission free.

More information on ‘Great Garbo’s Feet…..’ (the book, not the feet, which may be the subject of a subsequent article) here: http://www.word-power.co.uk/books/greta-garbos-feet-amp-other-stories-I9780992739263/