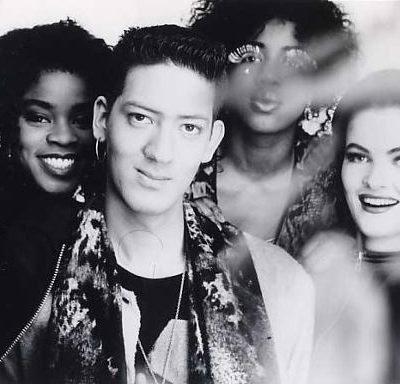 Dylan Jones is someone not only synonymous with the 1980s, but with my 1980s. With his editorship of magazines such as The Face, Arena, i-D, and regular columns for the Guardian, the Observer, and the Independent – at a time when print was still king – he told a generation what to wear, watch, read, and listen to in suitably glossy fashion for the decade when style was almost as important as substance, or at least that’s how it seemed. As an easily influenced teenager I devoured these magazines, and many more, leading to some memorable fashion faux pas. That Jones was among the original influencers on British culture, both for good and bad, is undeniable.

He continues to comment on matters cultural across the generations, but is often drawn back to the decade that shaped us both. His latest book, Shiny and New: Ten Moments of Pop Genius that Defined the ’80s, is a testament to that. It looks at the decade through the prism of pop, taking ten songs that Jones believes were central to events of the time, and which possibly influenced them.

It’s a deceptively simple structure, yet one which is bound to prompt arguments and debate as readers consider which songs and artists they would have chosen as their decade defining ten – “Where’s The Cure/Bauhaus/insert Goth band here?”, some may ask. This was a time where it was purported that tribes were clear cut and self-defining, such as indie-kids, new romantics, soul boys, ravers, metalheads, and many more . However, my experience, and one which Jones’ book promotes, is that most people listened to everything across the board, with Sade sitting alongside The Stone Roses, Squeeze, and Simple Minds in many a discerning record collection.

But Jones is at least trying to tick the boxes for the genres that dominated the decade. His Ten are bookended by hip-hop, starting with The Sugarhill Gang’s ‘Rapper’s Delight’ and ending with Public Enemy’s ‘Fight The Power’, (one of the great protest songs), and they are well chosen as they evince the development of a musical genre from its birth to becoming one which was as influential as any with regard to what came next. Between those two we have 2-Tone (The Specials), New Romance-ish (ABC), Indie (The Smiths and New Order), House/Dance (S-Express) and pop giants (Madonna, Prince, and The Boss).

It’s a selection which is hard to overly argue against as their popularity, and ubiquity, is used as a positive allowing a relatable overview, with each song serving its purpose and allowing further comment on the times. You could argue that a more obscure selection could have offered a more interesting alternative narrative, but that’s not the point. Jones declares early on that he wants to save the ‘80s from being dismissed as a time that was mostly surface with little depth, and he is successful in this endeavour.

Shiny and New: Ten Moments of Pop Genius that Defined the ’80s doesn’t offer many new insights or anecdotes for those who were there, but it undoubtedly generates a warm glow of nostalgia while examining social and political events. Each chapter begins by talking about the songs themselves and puts them in context of the musicians’ peers and rivals before going onto discuss wider concerns, with Jones often relating his own experiences of living through historic times, often at – or near -the eye of the storms.

Spending time with Dylan Jones is always a pleasure, and while we may not agree about everything – culturally, socially, and politically (and there are a few examples of this in the book, but, as when Jones recounts conversations with Jerry Dammers, we can cordially agree to disagree) he is great company, and can show his medals when it comes to the culture wars which seemed so important. Shiny and New: Ten Moments of Pop Genius that Defined the ’80s is a step back in time which, perhaps due to these worst of times, was warmly and unexpectedly welcome. If you were there then it’s a pleasure to make this slight return. If you weren’t, it’s well worth finding out just what was going on.