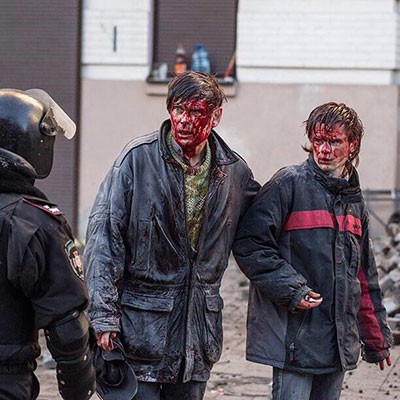 Face to Face: Andrew Wilson explains the events that led to bloodshed on the streets of kiev in February

Ukraine Crisis. What It Means for the West. By Andrew Wilson. (Yale University Press, £12.99 paperback)

Few will argue with Andrew Wilson’s assertion that the Ukrainian crisis of 2013-14 is one that will ‘shape the future of Europe’.

Wilson is perhaps our foremost student of contemporary Ukraine. He is especially acute on matters of belief and identity, on the past as it actually was and the past as politicians represent it. This is something of an instant history, but it has all the virtues of his other writings. In particular, it is well informed, full of relevant detail, and very strong on the political and economic clans whose complex interrelations lie just below the surface of the events he is describing.

We start, as we must, with Ukraine’s complicated history, but the central focus is the dramatic events of February 2014 – an ‘old-fashioned popular uprising’, as Wilson calls it, or ‘something resembling a revolution’. Wilson is generally on the side of the revolutionaries. Even so, he believes they made some serious mistakes: as when they included the right-wing Freedom Party in the new government, and repealed the language law that had appeared to offer some protection to the Russian-speaking minority.

All the same, the main delinquent in this account is the Putin government and the ‘conservative values project’ that animates its policies. Crimea, in Wilson’s view, was simply annexed. The Russian authorities were at least indirectly responsible for the shooting down of the Malaysian airliner. And they stand behind the puppet administrations in eastern Ukraine. A later chapter takes a tour around the other post-Soviet republics, particularly Moldova, Belarus and the Baltics, in which (Wilson believes) the Russian leadership could still cause trouble.

There is, of course, a rather different narrative, one that is supported not only by the Russian authorities but also by a series of well-placed Westerners including three of America’s most recent ambassadors to Moscow, who called in a letter to the New York Times in September for a ‘vigorous diplomatic approach to ending this conflict’. One of them, Jack Matlock, has blamed NATO and the US for interfering in Ukrainian domestic affairs in a way that is bound to alarm the Kremlin.

From this perspective, there is unlikely to be a lasting resolution until the West takes account of Moscow’s view of the changes that have been taking place in the post-Soviet region and of its legitimate interests – given its geographic location, the close trading links between the two countries, and the substantial numbers of Ukrainian citizens who define themselves as ethnic Russians.

Wilson points repeatedly to a Russian ‘persecution complex’ as the origin of their difficulties. But from a Russian perspective, it is hardly irrational to be concerned about the way in which NATO and the EU have expanded to incorporate a substantial part of what used to be the Soviet sphere of influence. For many Russians, the Ukrainian crisis was an attempt to engineer another regime change that would allow the West to extend its control up to the Russian borders. Wilson, for some reason, fails to mention much of the evidence that would support this rather different interpretation, including the intercepted telephone conversations between the State Department’s Victoria Nuland and ambassador Geoffrey Pyatt in which they discuss the composition of the new Ukrainian government; or the appearance of the CIA chief on the streets of Kyiv; or the $5 billion that the US government is reported to have spent in attempting to pull Ukraine into the Western orbit.

Wilson, similarly, believes international law was broken by Russia’s ‘annexation’ of Crimea. Others have been less convinced, pointing to the right of national self-determination that is enshrined in the UN Charter and the very special nature of a peninsula that was transferred to Ukrainian jurisdiction in a defective procedure in 1954 and remains very largely Russian by ethnicity.

Wilson is clearly impatient with an EU that ‘doesn’t care enough’ and with larger member states that are ‘preoccupied with their own problems’, particularly Germany, which is ‘leading the push for a bad peace’. One wonders why he thinks Western governments should cease to represent the best interests of the citizens that elect them, including the maintenance of their energy supplies. Or why they should commit their taxpayers’ funds to the support of a foreign state of forty-five million people with an economy that is rapidly contracting and which is mired in endemic problems of corruption and governmental incapacity. Or why they should prejudice their relationship with Russia by introducing sanctions that have scarcely affected Kremlin decision-makers while seriously damaging their own producers.

In the last resort these will be matters for ordinary citizens and their elected governments to resolve, one hopes as quickly as possible. They will all make better choices if they read Wilson’s detailed and incisive analysis.

Stephen White is James Bryce Professor of Politics at the University of Glasgow and a specialist on Russia and the post-Soviet republics.