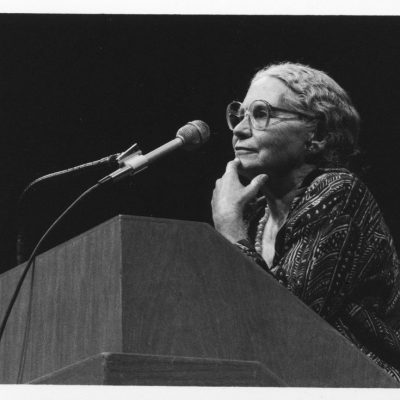 I remember the sinking feeling when I heard that Doris Lessing had died at the age of 94. Our heroes cannot live forever, but I had slightly madly expected her to. It’s no exaggeration to say that she had been my moral and intellectual overseer, since I first encountered her work when I was twenty-one. I can half hear her muttering, ‘what nonsense’. I suspect she wouldn’t approve of the idea of moral guidance. Ironically, it’s exactly her atheistic, critical eye that I rely upon. Through her work, she has shown me that a person, and a writer (and a famous writer at that) could be enquiring and unafraid, resilient, unpretentious, and proudly, purposefully an outsider. I’d like to share the books of hers that influenced me through the years. First, a caveat. Lessing herself advised, “There is only one way to read, which is to browse in libraries and bookshops, picking up books that attract you, reading only those, dropping them when they bore you, skipping the parts that drag […] Remember that the books which bore you when you are twenty or thirty will open doors for you when you are forty or fifty – and vice versa. Don’t read a book out of its right time for you’’.

If you take one thing away from this, I hope it’s that call to freedom. Forget the top ten bestsellers of the year. Read the book that grabs you, plays on your mind, and won’t let you go.

I’ll begin with The Golden Notebook. I was an immature twenty-one year old: still mired in teenage exhaustion and emotional turmoil. I was stuck in a certain way of thinking; impulsive and divided by mood swings. Then the Golden Notebook arrived, the right book at the right time. The novel follows divorced single mother Anna Wulf, living in London in the 1950s, as she faces up to her belated disillusionment with communism and her struggle to leave ‘The Party’; her writer’s block; a prolonged heartbreak as the (married) man she loves slowly leaves her; and her journey through breakdown, to the other side. But – there’s so much more to it than that. It’s an exploration of sexual politics. It’s an examination of why a person might cling to a broken political ideology. Lessing offered a new structure for a novel, in a series of notebooks containing connected, accumulating fictions.

It was the first time I’d encountered an author who took the individual experience – messy emotions, ungallant behaviour – and analysed it, clinically and meticulously. What thrilled me was the mix of hot and cold: the warm attention, the significance given to Anna’s breakdown, and the detached, impersonal eye that laid it all bare. I’ve heard people complain that Lessing is too cold. I think the warmth is in her devotion to the human subject. She’s a little bit like an alien watching us and writing about us: she’s disappointed in us, but ultimately optimistic about our chances. More of that later.

Back to London, the 1950s. The Golden Notebook spelled out for me that I didn’t have to be a slave to my emotions. I began to develop a greater critical judgement, and reflect more on things that happened to me. I finally started thinking before I acted. It was slow progress, but as I read on, Doris Lessing grew me up a little bit.

She has been a consistent teacher for the last twelve years, and I still thrill at every new encounter with her words. She rails against complacency and intellectual laziness. She abhors nostalgia, that dangerous lie. From the incisive, detailed examination of the individual, she can move, in a heartbeat, to an extraordinarily general viewpoint. In the Good Terrorist, Lessing attends to the naïve idealism of an individual, before she turns to the catastrophic consequences of that naivety. Lessing tells us of the rhythms of mass emotion, populism, youthful rebellion and its costs. She does not offer comfort. She gives us a shake and tells us to wake up, and do better.

Her famous short story, ‘To Room Nineteen’, was where I went next. This is the one I tell everyone to start with. It is the tale of a perfect life unravelling, as the central character slowly removes herself from her affluent lifestyle, her husband and children, and answers the call of her depression. The darkness that engulfs her is fulsome, irresistible, and inevitable. This is Lessing’s unforgiving scrutiny at its best.

Next, the Jane Somers books. In the 1980s, achieving consistently great reviews and great sales, Doris Lessing decided to publish a novel under an unknown name, Jane Somers, as a ‘debut’ author. She wanted to see if anyone guessed it was her, and if the book got the kind of rave reviews she had been enjoying. On both counts the answer was no, and the literary establishment were very miffed indeed when the mischievous pseudonym was unveiled as an author they’d previously lavished praise upon. They felt tricked. Lessing maintained that she was making the point that her work had begun to be judged on her famous name rather than on merit, and that progress will be slow if new authors and artists are shunned for merely being new.

Which bring me to her greatest influence upon me: in my decision that I should, and really, maybe, could, be a writer. Of course I’m not the only one who’s puzzled over the idea of being a writer. How does it work, exactly? How do you begin? I was afraid that I’d never have the confidence to pull off such a trick. I didn’t know the right people; didn’t move in the right circles. It’s a notoriously competitive field. So why bother? Lessing was the guiding light that I needed.

The odds were stacked against her, but, crucially, I don’t think she ever saw it that way. She grew up in a rural colonial community in Southern Rhodesia (now Zimbabwe), left school at thirteen, and was more or less self-educated from that point. She read everything she could get her hands on, and she wrote ceaselessly. She married for the first time at 20. She went on to have three children, divorced, married again. Then she set sail, in 1950, for London, with the manuscript of a novel in her suitcase, and one of her young children with her. The loneliness, pain, and sense of failure of this time are described in her autobiography. Yet she had done something fantastically brave – so brave it bordered on utter madness – for the sake of her writing. She wanted to be where the other writers were. She imagined a vibrant, cosmopolitan society, away from the racism and small-mindedness of a colonial backwater. In truth, she was penniless and London was in ruins: bombed-out buildings remained as they had fallen.

The manuscript sold, and became her break-out novel, The Grass is Singing. She didn’t understand until years later how ‘green’, how naïve, she had been when she arrived in London to seek her fortune. Perhaps we all need a bit more of this this faith, this magically optimistic ambition. From then on, she worked. She wrote The Golden Notebook at ‘white-hot speed’, she said. She wrote in shared housing, she wrote while raising her son, she wrote while building work went on around her typewriter. As she put it, “whatever you’re meant to do, do it now. The conditions are always impossible”.

My journey through her work has moved, roughly, from the personal to the political. Perhaps the most overtly political are her series of lectures, Prisons We Choose to Live Inside (which you can listen to free online). Part of CBC Radio’s series of lectures from prominent thinkers, these were recorded in 1984, and are horribly relevant today. This is what I found, twelve years after my fateful encounter with the Golden Notebook: a series of lectures that illuminated our present bind: Brexit, Trump, the rise of the far right. Lessing’s central point is: we have all this recorded history, all this information about human behaviour, but we don’t use it. Instead, we are swept up in in mass emotion, time and time again, very often with tragic consequences. As the philosopher Julian Baggini put it, ‘history doesn’t repeat itself, but it does rhyme’.

There are plenty more Lessing books I haven’t read, and look forward to. Lessing, always searching for greater freedom, later moved into the realm of science fiction, which seemed to have alarmed critics and readers alike. Why would a respected author choose a genre deemed commercial and, perhaps, unserious? To Lessing it seemed obvious: progress was only possible in this area of fiction that was unrestricted and free. “To see ‘them, us, the human race’ from an alien viewpoint […] is to lose your inhibitions about radically alternative views of progress”. Away from the stuffy regard of the literary world, there was vision, autonomy and honesty. From her earliest work, she seemed to have had that alien viewpoint at work.

Back to the personal. There was one line in the Golden Notebook which haunted me for years. It made me feel a little bit sick. Anna Wulf says, “What’s terrible is to pretend that the second-rate is first-rate. To pretend that you don’t need love when you do; or you like your work, when you know quite well you’re capable of better”. This upset me at the time, and I couldn’t understand why. Of course, it was because the truth hurts – I was living quite a second-rate life. I did what we all do when faced with an ugly reality, and I tried to see if I could ignore it for a while. It took me many years to own up to my dishonesty, to admit that I wasn’t ok with the second-rate. I began to give time and attention to my writing. I began to try. I failed, and kept trying, until I had begun to do better. I’m not there yet, but I keep faith. As Lessing reminds me, ‘the conditions are always impossible’.

Amy Jardine will be reading from her work at the Waverley Bar, Edinburgh on Thursday December 13 at 7.30 p.m. All welcome.

The CBC series “Prison we choose to live inside” can be heard here: