Artist Calum Colvin on creative invention, what to say to painters when they pick on you, and how to glue a tortoise to an ironing board 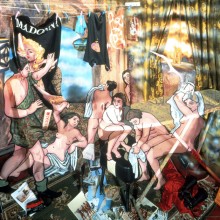 Diana and Actaeon (after Titian) 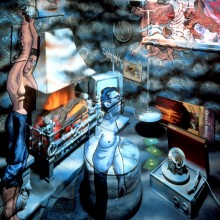 The Stoning of St Steven (after Elsheimer) 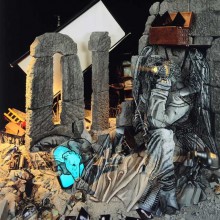 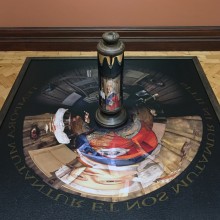 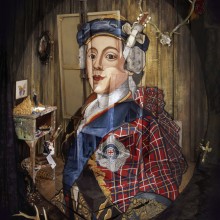 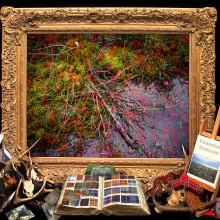 Times change, and we change with them… Jacobite Motto

Calum Colvin is a multi-disciplinary artist who uses installation, painting and photography to create his works. He currently has work on show at the Scottish National Portrait Gallery as an ‘intervention’ within their permanent Jacobite collection.

To create his images Colvin builds stage sets in his studio, then sets up at large view camera and paints his subject onto the set using trompe l’oeil. This ancient technique, popularised by Renaissance and Flemish painters, literally means ‘deceive the eye’ whereby the viewer is tricked into seeing a two-dimensional painting as three-dimensional. In his case it is something of a double bluff because while the first thing the viewer notices is the painted subject, closer inspection reveals the set, which really is three-dimensional. It is the reading of the work and the physical deconstruction that intrigues him; “I’m interested in what happens when people look at an image, what they see, what they think they’re seeing and how an image slowly opens itself.”

His approach has given him a style that’s instantly recognisable, something which is not easy to achieve in an area such as photography that, like all art, is subject to changing fashions. “I always thought when I first started out, if people could recognise your work, that’s an achievement.” Remaining true to this technique over thirty years, his evolution as an artist has come in his subject matter: “painters will say to me are you still doing that thing? And I’ll say are you still doing that thing with the paint and the canvas?”

Arriving at Dundee School of Art at the age of seventeen, Colvin originally thought he’d be a painter but discovered quickly that he didn’t like painting so switched to a sculpture diploma. Joseph McKenzie, the photography tutor at Duncan of Jordanstone, saw something in him and encouraged him in his photography. After graduating from Dundee, Colvin enrolled in the Royal College of Art in London with thoughts of becoming a photojournalist. While there he had a tutorial with the legendary Bill Brandt: “I had already started to make sculptural photography pieces. When I showed Brandt my work, I showed him landscape photographs made in Scotland which he was kind of interested in, but when I got to the end I had shoved in a couple of the very early, black and white, sculptural, painting-type pieces and he pointed them out and said you should go forward with that.”

Although it is now common practice for artists to work between disciplines when Colvin first started out he found himself occupying something of a hybrid space. His first exhibition ‘Constructed Narratives’ opened at the Photographers Gallery in London in 1986 and caused something of a storm. “The perception in the minds of people was that this really was not what photography was about”. There was a similar feeling from the painting world, artists tended to stay within their discipline. However, there was a change in the air blowing across from the States other artists like Sandy Skoglund and Boyd Webb began to work in photography gradually turning constructed photography into a worldwide movement. ‘Then the art world changed, became much more open, much more amoeba-like.”

Colvin has always been drawn to Scotland and the idea of Scotland. It’s a theme that frequently appears in his work, either as the subject or included in the smaller details, the little worlds that he builds into his images. “By exploring your own culture, your own language, you can see the universal in the particular.”

As a young artist Colvin¹s work often involved exploring his own place in the world he would insert relics from his own childhood and objects of significance passed down through his family into his pieces. “I recognised at that stage in my life, that these represented very different types of Scotland. My experience as a child growing up in the 1970s was very different to my father growing up in the 1930s and my Grandfather¹s experiences even further back.” As he has grown older his work has grown less personal and he is now more interested in focusing his gaze outward and looking at other issues.

“As I got older I realised that Scotland is and always was a contested country and a contested culture, which makes it even more interesting.” His current show at the Scottish National Portrait Gallery revolves around the Jacobites, it aims to explore how a movement that started off as a rebellion against an unpopular established order became a pastiche. How propaganda works to co-opt the image of a rebel Prince and turn him into dandy gracing the front of a shortbread tin. It’s an issue that is perhaps more prescient in Scotland today than it was even ten years ago.  “I’ve always been interested in history and how myth is constructed”.

His 2002 exhibition Ossian: Fragments of Ancient Poetry concerned this. It alarms him that people can be so ignorant both of their own history and of the significance of the figures and movements that shaped the Twentieth century, what drew people to them and how that played out. There’s a concern that lack of knowledge and interest will lead to increasingly reactionary regimes like Trump and even David Cameron “who appears a reasonable man but there is a big difference between what he says and what he does, you can get away with that if the populace are ignorant of history.”

Technologically photography has changed massively since Colvin started out thirty years ago. However, he still shoots using a large format 8×10 film camera, the same one Joe Meyerowitz, one of his heroes, used. He sees the future of digital photography as a simplification of the bells and whistles, practically makes you a cup of tea in the morning DSLRs that are currently on the market. There has also been a huge proliferation of picture taking devices in the last few years but Colvin remains positive about the future for emerging photographers.

“At the end of the day you still need to figure out how to compose a picture, to know when to be ready to take the photograph. The decisive moment, as Cartier Bresson said. You need to anticipate a photograph, see the image before it happens.” His advice is to roll with the punches, try to keep your eye on what you want because although you won’t always get to be doing it it’s important to remember what it is. “The very simple ambitions are the best ones, like what would happen if I glued a tortoise shell to an ironing board? That’s the stuff that keeps me up at night.”