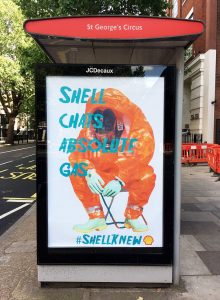 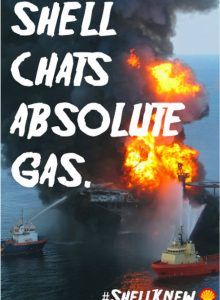 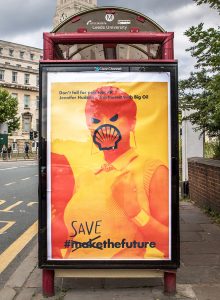 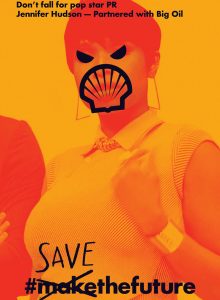 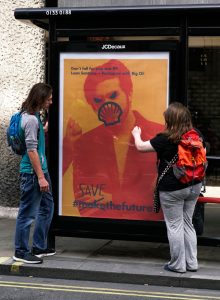 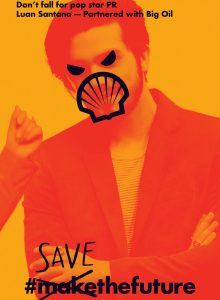 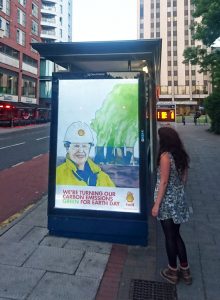 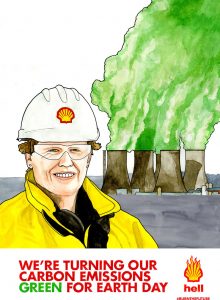 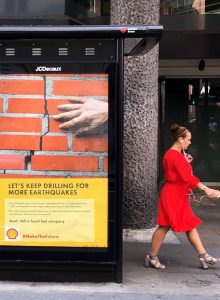 Art protestors have launched a campaign of spoof adverts ridiculing Shell over the oil giant’s attempts to portray itself as environmentally sustainable. Members of the ‘subvertising’ group, Brandalism, have installed subverted Shell adverts across outdoor advertising sites in London, Leeds, Oxford and Bristol to criticise the Make The Future advertising campaign by Royal Dutch Shell.

Actions took place in the run up to weeks Shell’s Make The Future Live festival, which opened today in Queen Elizabeth Olympic Park, London. In a bid to attract to millenials, Shell have employed singers Jennifer Hudson, Pixie Lott, Luan Santana, Yemi Alade and Monali Thakur to “celebrate” five cleaner energy initiatives developed by Shell. A Brandalism statement said: “The artworks highlight the hypocrisy of Shell’s recent PR campaigns promoting itself as a responsible and sustainable company whilst it continues to attract criticism for its fossil fuel extraction, human rights abuses, aggressive lobbying against climate legislation and historic climate denialism.”

Product spoke to Brandalism co-founder, artist Bill Posters, who some readers may suspect was not christened with this name. “Our key message is that Shell chats gas when it comes to climate change and providing renewable ‘green tech’ solutions to the environmental crises they are complicit in creating” he said. “Just keep fossil fuels in the ground.”

Posters continued: “Shell and Big Oil companies have multi-million dollar PR and communications budgets designed to present an image of their brands to public audiences that is crafted and shaped by some of the world’s most expensive advertising and PR agencies. The battle is one for perception and quite often it works as these brands and corporations have entwined their products and services into our daily lives creating dependency regardless of their business model. However this is changing as younger generations have more open and decentralised forms of information in the digital age which allow people to see through greenwashing campaigns.”

“For example, campaigners emphasise that although Shell recently announced they would increase their investment in clean tech, it still amounts to only a small fraction of their overall investment. In November last year they announced that they bowed to shareholder pressure and increased investment in their new energy division from $1bn a year to $1-2bn. To put this in context, Shell has $5bn-$6bn a year allocated for deepwater drilling, and a further $2-3bn a year for shale oil and gas.”

And Posters was critical of singers such as Pixie Lott and Jennifer Hudson for their involvement with Shell.”Our message to the fans of big pop stars that are being paid huge sums of money to make Shell look cool is “don’t fall for pop star PR.” Millenials are moving away from careers in fossil fuel industries because they aren’t stupid and know corporations like Shell are part of the climate problem. Fans need to step up and call out their idols for supporting environmentally destructive companies like Shell. What message does it send to young people when famous celebrities endorse corporations and Big Oil companies like this?”

“In the age we live in we can’t separate climate change from our daily lives and celebrities like Pixie Lott, Jennifer Hudson and the rest need to be responsible role models for their young fans.”

“Pop stars like Pixie Lott that are colluding with Shell need to step up and use their creative talents to challenge corporate bullshit and demand a future that protects our environment for all. Instead they’re taking huge sums of money and becoming complicit in causing climate change.”

Posters issued an open invitation to anyone in London at the weekend. “Brandalism and over 20 campaign groups will be hacking Shell’s Make The Future festival launch with a massive satirical dodgeball game at the Olympic Park in London on Sunday the 8th of July. Designed as a fun and family-friendly intervention, local climate activists are inviting anyone in the area to drop by and pick a side: the people vs Royal Dutch Shell. Groups involved in the dodgeball action include Divest Hackney, Fossil Free Newham, Fossil Free Islington, Art Not Oil, Divest London and Fossil Free London. To play on the side of Shell, come dressed as a suited oil executive or your favourite cartoon villain. Otherwise just wear your normal clothes and play as yourself – planet colours of blue and green if you have them. There will be team chants, comic commentary and a giant planet earth ball to play with.”

Shell doesn't really care. Do u? Join our giant dodgeball game protest on July 8th to expose @Shell's toxic PR for what it is – pure greenwash! Sign up here https://t.co/T8eJBhAIqN #makethefuture #ShellPlaysDirty pic.twitter.com/k0zNEJIML4