Secret rendition flights take terror suspects to be tortured abroad via UK airports. Britain’s crime has been to look the other way, writes Stephen Grey 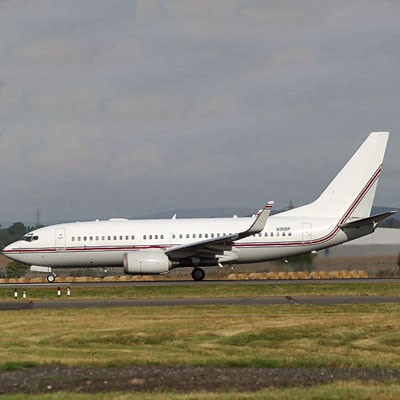 This Boeing 737, seen in Glasgow, Scotland on Sept. 7, 2003, has been identified by European investigators as a plane used for CIA rendition flights. (AP Photo/Fred Seggie)

There last three years have for me been a strange journey – into a world of events that can take place on our doorstep and yet remain un-seen, events hinted about and yet unconfirmed, of high-living luxury (smart hotels and executive jets) and a glimpse into our heart of darkness, into some of the worst evils that we allow ourselves to tolerate.

We all feel sometimes that we get a glimpse of history. In that heartstopping moment,when the planes struck the Twin Towers,we knew the world had changed. And yet for those of us not personally affected, to some degree those images faded. Our daily lives continued. We knew we lived in a different world, but many of those changes were hidden, concealed from our everyday view. We couldn’t quite put a finger on how things had changed.

It’s easy to pretend that living through momentous events – like during the rise of Nazi Germany or in the days of Stalin’s Soviet Union – meant that everyone understood and knew of the evils being perpetrated. The truth is that most in Hitler’s Germany may have seen signs of the persecution going on, but might well and did afterwards say: “I never saw it with my own eyes. I was not sure. I was not responsible.” When the Soviets created their Gulag, ultimately incarcerating millions of citizens then, again, it was a parallel world they created. As the dissident Solzhenitsyn described in Gulag Archipelago, the biggest emotion after someone was arrested and taken into the Gulag was not so much anger. It was surprise. How could it happen to me? Why am I here? Why didn’t I know about this place?

For the last three years, I’ve been trying to unravel some of the tentacles of a modern gulag – the network of prisons established by the US and its close allies to hold the thousands of prisoners captured in the so-called War on Terror. Of course the numbers involved, the scale of brutality, don’t match what happened under Stalin. But what I found frightening, when re-reading about the Soviets’ system, were the eerie comparisons. What Solzhenitsyn described was something that, despite its vastness, could co-exist with normal life and yet remain hidden. Prisoners for example might be held in the house next door yet no ordinary citizen would guess. He wrote:

“And this Archipelago crisscrossed and patterned that other country within which it was located, like a gigantic patchwork, cutting into its cities, hovering over its streets. Yet there were many who did not even guess at its presence and many, many others who had heard something vague. And only those who had been there knew the whole truth.”

Compare this surreal Soviet world to the case of Maher Arar, a Canadian who was arrested while changing planes on a normal flight through New York’s John F Kennedy Airport. He was surprised to be arrested by the FBI and then, rather than being send home to Ottawa, to being placed on an Gulfstream executive jet and flown by US agents to a torture centre in Syria. As confirmed recently by an official public inquiry, he was tortured there and held in a cell little bigger than a coffin for nearly a year.

Maher told me about that strange flight to torture. “I thought when they put me on this private jet with its leather seats, I started thinking about myself – who am I that they should do that? Am I that important for them? What kind of information could I offer to them? So I started thinking, what’s going on here?” What happened to Maher was a case of what the CIA call ‘rendition’ the transfer of a terrorist suspect to a foreign country, including to places like Egypt, Syria, Morocco, Jordan and Uzbekistan, where they may be tortured. My book, Ghost Plane, is an account of this rendition system, one that I discovered has swallowed hundreds if not thousands of prisoners into its entrails.

As a reporter covering the aftermath of 9/11, I got a hint about what was developing – the secret consequences, endorsed by America’s government and President that rose out of the ashes of the World Trace Centre – a secret revenge. Ironically, I was first told about rendition in an interview with Porter Goss, a man who went on to be the director of the CIA under President Bush. And when the prison camp at Guantanamo opened I was told by sources close to the CIA that this Cuban prison was a distraction – that by far the majority of terror suspects were being sent to infinitely worse prisons run by allies of the US like Egypt. The book is a kind of detective story of how I discovered more.

Some prisoners, people like Maher Arar, emerged from these torture cells to describe their stories of rendition and brutal treatment. But the problem, over the months I spent investigating, was to prove these stories and understand the scale of events. After all, post-9/11 who should believe the word of a suspected terrorist? It was then I discovered the existence of fleet of secret planes, an airline operated by the CIA. Ultimately, it was my discovery, with the help of others, of these Ghost Planes and their movements that helped to confirm what was going on. Through a source I obtained the flight plans of the CIA’s own jets and this was how I could prove the accounts of these prisoners – men like a prisoner of the US, an ex resident of Notting Hill, London, who gave a detailed account of his rendition to a torture centre in Morocco.

The flight plan of a CIA Gulfstream jet proved what he said was true. The flight plans showed almost all the CIA’s renditions missions involved the use of airports in Europe, particularly Frankfurt airport in Germany and Glasgow and Prestwick in Scotland. Later I met some of the pilots who carried out such rendition flights. They told me that Prestwick was often chosen as a refuelling point because it was a “no questions asked” kind of place. They could pass through unremarked.

The discovery of all these flights through Europe, as well as reports of secret CIA jails, led to urgent demands for the United States to halt any complicity in torture and end these renditions. In September Bush acknowledged the CIA’s secret jails and promised to bring their inmates, including some of the architects of 9/11, to face a military trial. But Bush did nothing to shed light on the fate on the hundreds of others that have simply been ‘disappeared’ through rendition into foreign jails and into torture. In fact, new legislation passed by Congress has effectively given the President new powers to seize suspects worldwide and hold them indefinitely – without bringing charges against them.

Are extreme measures like rendition necessary to defeat a dangerous enemy like Al Qaeda? Consider relations with a country like Uzbekistan in Central Asia and its President Karimov, a leftover from Soviet days. It’s a place where, just as they were in the days of Genghis Khan, prisoners in recent years have literally been boiled alive during torture. There is clear photographic evidence. In the name of fighting terrorism, the US worked very closely with Karimov, who had a strong Islamist opposition. The US rendered prisoners from Afghanistan to Uzbekistan and many of them, judged by Uzbekistan’s record, were likely tortured, boiled alive. Is that really the way to fight terrorism? As one former intelligence officer after another I’ve met has made clear, these kind of tactics, these kind of alliances with brutal dictators, are going to help recruit enemies for us, help lose the ‘War on Terror’.

What then of Britain’s role, of our role, in this secret world? The British government has mostly been opposed to tactics like rendition, opposed to torture. Intelligence officials have known about some renditions, even played “peripheral role”, as one source put it, in others. Its airports have provided key bases for the CIA. But, with its close relationship with the United States, and knowledge of many of its secrets, the biggest role played by Britain, its biggest shame is something much more simple but also shameful – silence. Prisoners have been boiled alive, brutalised with electric shocks, half-drowned, and held in coffinshaped cells for months on end, and all at the behest of our closest ally. Yet, when history writes their full story, we will all perhaps react with horror: “I never saw it with my own eyes. I was not sure. I was not responsible.”

Others, looking at us, will be scornful: “Of course they knew. They knew and they stayed silent.”