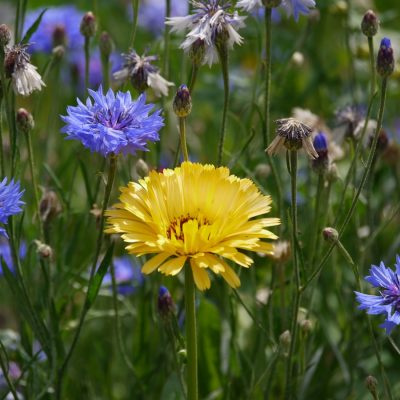 My knees are not comforting. I hoped they would be when I hugged them to my chest, but they are disappointing. Bone skinny and stubbly.  A thin line of hair missed when shaving.  My legs are bare, my knees grazed and cut open, as though I have become a small careless child again, falling over gaily without a care in the world.  I’m still in my uniform although my shirt is ripped and my bloody nose has stained it, and I know I cannot wear it again.  I have not been down here before; I do not know it.  I am sitting in the long grass that is taller than my body which has sunken down to the ground; mud has attached itself to my skirt.  The burn pours rapidly to the left of me, the water gushing at a pace quicker than my streaming tears. The burn is a ten-minute walk from the bustling town through boggy patches of overgrown grass which is littered with empty bottles.  Deserted now apart from me and my body.

They say he comes here, when he wants to read his porn. They say he rampantly cycles here on his rusty bike with the red frame. They say he parks over there by the tree to the right of me and reclines in the spikes of grass reading, pleasuring himself.  I suddenly find myself willing him to be here, to be surrounded by his strangeness and feel it mingle with mine. I close my eyes and ask him to arrive. If he doesn’t come, I might throw my body of bones in the burn and drown, the water filling my lungs as I lose consciousness.  I might do it. I probably won’t.  I am not a girl of integrity.

The sound of wheels crunching mud surrounds me and comes to a crashing halt.  He is here, as if it was his own decision, and I am silent.  I observe him as he dismounts his bike and balances it against that tree. He is not wearing his uniform anymore. Small white shorts that emphasis his gangly limbs and a grey hoodie hang from him, covering his nakedness.  I sink further into the grass to become one with nature so I can watch him.  I see him reach inside his backpack and I gasp.  He may kill me, if he sees me, or so the rumours go, so I stay still.  He pulls something out, book or magazine, sinks down at the tree and rests his head against it, closing his eyes for a minute. He is going to do it in front of me and I am unable to turn away.  I bite my lip and brace myself, my hands making their way under my skirt and

Oh fuck.  His eyes open startled.  He stands and I am frozen with fear.  He his going to slit my throat with my pants by my ankles and I will bleed out on the grass. It will be weeks before they discover my tiny body, but it will be entirely too late; the dogs will have feasted on my flesh, pulling it savagely apart from my bones.  He spots me.  I sit up.

Oh.  Hi Rosa. I didn’t see you there.  He walks over and sits next to me, dumping his backpack and the pad down beside us.  I am grinding my teeth and they will soon become powder, choking and killing me anyway.

Hi Pete.  From my peripheral vision I can see him analysing my appearance.  I am less presentable than I was in the corridor when they had him in a choke hold and I walked past silently.

What are you doing here? he asks me, and I shrug,

Came with Tom.  Our parents have grounded us from seeing each other so we have nowhere else to meet.  It is true.  Our parents mutually hate our chosen partners.

Did he do that to you like?  He motions to my bleeding nose and ripped clothing.  I nod and he makes a strange grunting noise as he shakes his head and looks at his hands, Dickhead.

We had an argument.  He got a bit handsy.  He left, I didn’t fancy going home yet, I say.  We sit in silence for a while.

I wonder if he is going to kill me.

I stare at the pad on the grass.  I wonder what kind of sick photographs it beholds.  I turn to look at him then, slowly rotating my head as though it may fall from my neck if I move it too rashly, rolling into the streaming burn.

Ah, my sketchbook, he says as he looks directly at my face, it’s just my sketches.  See.

He reaches for it and opens it, flipping through the pages.  Pencil sketches of the burn with its flowing stream of fresh water, the overgrown shrubbery surrounding it, the grass, the mud, the stones.  They are very detailed.  I am altogether disappointed.

I am dumbfounded.  I swallow syllables.  They seem futile to even voice.  Finally, I say Why do you allow them to be mean about you then?

He has started to sketch the stream now.  He frowns and continues to draw, looking ahead of him, studying it. I want him to study me like that.

It’s easier to ignore them than stick up for myself, he says, be invisible.

I sigh.  I am certain that I can outrun him if he attempts to slice me open with the knife in his bag.  He is a waif and painfully thin but then I too am exceedingly weak.  We may just be as fragile as each other, both unable to outpower the other, forever rolling about in the greenery until we gave up and went home to bed.  He opens the bag then and I see the shimmering silver reflecting from the overbearing sun, blinding me.  I gasp and try to waken my brain which seems sleeping, resigned to my unfortunate demise.  He turns to me, frowning as he shakes his head.

It’s just tinfoil, he says and pulls out a tightly packed square. There is a ham sandwich inside without the crusts.  His hair will not grow curly, What? Did you think I had a knife in there or something?

Obviously, yeah, I say feeling foolish.  He laughs again and takes a bite of his sandwich.  It looks divine.  I feel my stomach rumbling; I have not eaten anything since breakfast.

Jesus.  The rumours you hear about yourself eh.  Unbelievable, his jaw chomps down.  I notice the fresh bruise spreading across his forehead in a messy splattering of purple and yellow, want a slice?

I nod and take it from him.  I was correct; it is divine.

What are you doing having a fucking packed lunch by the burn anyway? I say.  His demeanour changes and he sighs deeply, moving the earth below our bottoms as it vibrates,

What about in the winter? I find myself asking.  It is no secret that he frequents the corridors resembling a battered ragdoll.

In the winter, he says as he finishes his sandwich and licks his long fingers, I get more bruises.

We sit.  The blood smells like rust under my nose; it has solidified and dried, so I pick it off and fling it at the grass.  It disappears.  I am cold in only my skirt and shirt.  He notices me shivering and in one mighty swoop, removes his hoodie and gives me it. Very gentlemanly for a killer, I tell him.  It smells of cigarettes and sweat.  His eyes are looking somewhere that is not at my face or his sketchpad.  I follow his gaze and see my pants lining my ankles from when I pulled them down in anticipation.  He swallows.

I’ll take you virginity, I tell him, if you want me to.

Now that I know he will not kill me; I think I would quite like that. I expect him to recoil, aghast at my boldness and lack of ladylike qualities but he sits in quiet contemplation. I am entirely a good girl, from a wealthy family and I have a boyfriend.  But I was wronged earlier, and I want to feel desirable again.  This quiet and mysterious boy a year younger than me will make me feel good again.

Yeah, sure, go on then, he merely says.

I am on my hands and knees and he is inside me.  We are groaning and moving, and I am saying yes Pete yes.  He pulls out of me and comes into the grass, tapping, before slumping back, exhausted and spent.  I pull my pants up, some blood trickling down my legs so I wipe them with my hand. After a while I go and rinse them in the fresh water of the burn.  My grazed knees now sting with the mud of the earth.  I lie next to him; his chest sinking down and up, down and up, until his breathing normalises.  He looks at me and grins and I grin back.  He looks handsome to me then, like I have known him this way my whole life.

Do you do this often?  He says and I say what, then he says, seduce young boys in the great outdoors?  Jesus that was good for me.  Was it good for you Rosa?

Yeah, I say, and it was.  It was more fulfilling than with Tom.  Tom was a lazy lover, very selfish, entirely terrible at sex. Pete moved in me with such urgency and want that I am still reeling now, my mind foggy as the fog surrounds us, intoxicating.  Don’t tell anyone about this.  You promise Pete?

I don’t have a death wish do I, he says, sitting up on his elbows, looking down and me and smiling this sheepish grin, we doing this again then or what?

If you liked it that much,I say.  He nods, then,

See.  Told you I wasn’t going to kill ya.

He is all I can think about. It is as though when he moved in me, he injected a poison and I cannot think of anything else.  My mind is wandering, lost, unfit for concentration. The time is ticking backwards, I am sure of it.  He is not in school today.  I have searched for him with my eyes in all the corridors and the playground and the canteen where I do not feed myself.  When the bell signals the end of the day, I race to the burn for my reward.  My bones hurt and wither in my body as my feet pummel the pavement, fighting the muddy path to the long grass.  There are no tyre marks in the mud; he is not here yet.  I sit and I wait.  Patience is a virtue.  I pull my knees to my chest to my chin and I hug my bones close.  He will be here, and we will be on our hands and knees and grunting and sighing and moving together.  We are not yet together.  The darkness suffocates me as it engulfs me like an invisible veil, strangling me, weighing my body down.  I am scared now, and I want to go home, but I daren’t move in case I miss him.  I would rather die than miss him.  I would rather die.  But I am not the one who dies.

Hannah Sutherland is a writer based in the North East of Scotland. This is her first piece of published work. She is currently writing her debut novel. 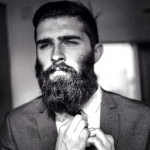 How to trim your beard 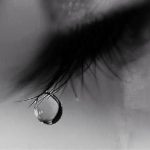 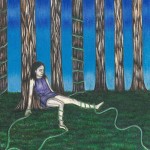 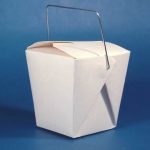