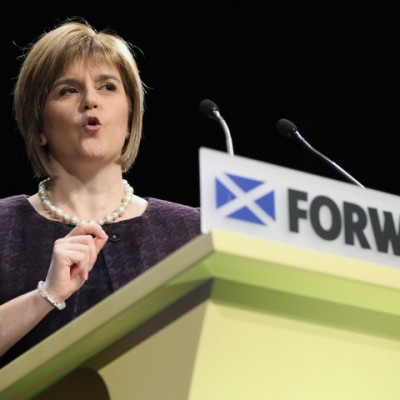 Following the Holyrood elections on 5 May, Scottish politics in the next five years will be very much determined by the outcome of the EU referendum on 23 June. And yet, that elephant in the room has hardly been mentioned in the post-mortems on the Scottish elections. While the elections south of the Border seemed at times totally overshadowed, if not eclipsed by the ‘Brexit’ debate, this was clearly not the case in Scotland. Despite that, the campaign remained lacklustre, the SNP’s campaign, as Chris Bambery noted, “centred on promoting Nicola Sturgeon as the nation’s leader, downplaying the chances of a second referendum and ditching last year’s anti-austerity message.” Otherwise, it seemed more noteworthy for its gimmicks and stunts than for substantial debate. All the new powers for the Scottish Parliament, all the tax proposals – and, in the end, only the constitutional question could inject a modicum of excitement to the debates. The rather modest turnout figure of 55.6% – nearly 15% behind the Westminster elections of last year, and a staggering 30% short of the referendum turnout – speaks volumes. Where did “the most politicised electorate in the world” go? What has happened to the democratic renewal in Scotland?

Rise did not live up to its name. Jamie Maxwell, who acted as its press officer, was brutally honest about its failure to make an impression at the ballot box. One of the reasons may well have been the low turnout. Unlike during the referendum campaign, this time Rise could not mobilise those “left behind” by the other parties. But the question is – was it wise to enter an already crowded field of left-wing and pro-independence parties competing for votes? “The SNP, a leftwing Labour party, the Greens, RISE and Solidarity were all jostling for the same territory.” And, Jamie Maxwell continued, “for all the talk of RISE as a “Scottish Syriza”, Scotland had already had its Syriza moment – in 2015, when the SNP stormed Westminster. The SNP has a near monopoly on anti-Tory, anti-austerity sentiment just now. That’s not going to change any time soon.”

Indeed, to get the support of nearly half the voters in the election after nine years of being in government is, by any standard, an astonishing result for the SNP and a huge personal endorsement of Nicola Sturgeon. But then, the Scottish polity is far from “normal”. Here, one party manages to be government and opposition at the same time, government in Scotland, and opposition to the government at Westminster. And due to the emphasis on constitutional politics, many voters will be lenient towards the government record in office, as long as the drive for independence is maintained. There are, though, signs of this fraying at the edges. Voters disappointed by the timidity of the SNP manifesto and the highly personalised, nigh-presidential campaign (crowned by  Sturgeon’s posing with the cover – featuring her photo – of the Scottish Sun, only days after the verdict on Hillsborough) took the opportunity to split their vote and support the Greens, who are also pro-independence, but more radical in their tax and social policies.

Despite its stunning victory, the SNP fell just short of an absolute majority which, hopefully, will boost democratic debate at Holyrood. It also poses the question where the government will get the support from to push through its manifesto – and where they are willing to compromise. The tax policies of the Scottish Liberal Democrats, Scottish Labour, and of the Scottish Greens are all more progressive than the SNP’s plans. Will the informal ‘union’ of SNP and Scottish Tories that characterised SNP minority government between 2007 and 2011 resurface – despite Ruth Davidson’s protestations of “strong opposition”? Or will the SNP look left and get support from the Greens, from Labour, or the Lib Dems? Fracking with the Tories – or scrapping the council tax with the Greens – a no-brainer? The Greens’ six MSPs alone would be enough to deliver a parliamentary majority should the two parties manage to find common ground. And Patrick Harvie is right: a deal with the Greens would be more popular than the SNP receiving support from the Tories. Clearly, a dull campaign brought about a very interesting election result.

There is a clear option of majority support at Holyrood for progressive policies – on taxation, investment in health and education, local government, radical land reform, and sustainable energy policy – if the SNP chooses to work with other progressive forces in Parliament. Whichever way the SNP goes – as part of such a progressive alliance or consolidating the centre ground – could define the narrative of this Parliamentary term. Complacency and, defending its record in government, being seen as too comfortable with the status quo, are dangers lurking ahead for the party, particularly going into a third term of government.

After a series of false dawns under David McLetchie and Annabel Goldie, Ruth Davidson managed to reverse the downward trend that had engulfed the Scottish Conservatives since their disastrous defeat in the 1997 General Election. She did it, not with an ambitious programme for government (that would have been rather far-fetched), but by underplaying the still toxic Tory brand and by appealing to the rock-solid No-voters dismayed by the fact that the referendum did anything but settle the constitutional question “for a generation,” attracting a considerable number of Labour No-voters. Her three messages, hammered home relentlessly when not riding a bull, were, pace James Mitchell: “She opposed a second independence referendum. Labour was hopeless and hapless. Only Ruth Davidson would provide strong opposition.”

The Labour Party, not (yet?) able to woo Yes-voters back from the SNP, and losing No-voters to the Conservatives, suffered not just another setback, its grim result at the polls was the worst in living memory. Is it terminal decline? The auspices are not good. The reasoning within the party is utterly divided. There are Lamont’s “dinosaurs”, like ex-MP Tom Docherty, who was quick to blame Scottish Labour’s “unambiguously socialist platform,” characterising the manifesto as “self-immolation for dummies.” To the divisions between left and right, echoing the controversies surrounding Corbyn south of the Border, there are differing views of the Labour position anent the Constitution. “We need to stop dividing people on the basis of nationality,” stated the newly elected Richard Leonard, “and start uniting them on the basis of class.” Whereas Alex Rowley, who lost his Cowdenbeath seat but was returned to Holyrood on the list, blamed Labour’s defeat on the reluctance to embrace Home Rule, echoing remarks by former First Minister Henry McLeish.

David Martin, one of Scottish Labour’s two MEPs, may well be right: “If properly articulated, Labour’s position on the constitution is where the majority of Scottish people are. They do not want unbridled Unionism or Nationalism. They want for Scotland: “maximum power with maximum security”. Labour, the Party of Home Rule should have no difficulty in promising such an outcome.” He has a point when he observes that “in recent years through the Calman Commission, the Brown devo-max, the Smith Commission we have moved but always it appears chasing events not leading.”

Martin sees the 2016 manifesto (bizarrely only published a week before the election) as “a good starting point”. The problem was that “Labour set itself a false choice in 2016. We thought that concentrating on radical policies for delivery meant leaving the constitutional argument behind when in fact fusing the two could have got us a better hearing and a better result.” That is borne out by polls which saw the NHS (72%), the economy (41%) and the cost of living (41%) towering over the constitution (5%) when it came to voters listing their electoral priorities. But these issues are, in the voters’ minds, all tied up with the constitutional question – which Labour neglected at its peril.

The biggest factor in Labour’s downfall has been short-termism and inconsistency. Kezia Dugdale was only in her post for nine months before the election. And her manifesto was full of new policies. Jim Murphy’s tenure as leader lasted not even nine months. And Johann Lamont’s parting shot about the “dinosaurs” and London’s treatment of Scottish Labour as a “branch office” are still ringing in the ears of the public. Trust cannot be rebuilt in just a few months. And six leaders in the past eight years is a telling symptom of this malaise. Too many people felt left in the dark about what Labour actually stood for.

Euan McColm’s barbed advice for Labour to “ditch” their tax policies, arguing that their “best – perhaps their only – chance of survival is to be ready to capitalise on an SNP slump that might never come” is wrong and insufficient. The party needs credible policies, developed over time, and it needs to scrutinise government policy, exposing any failure to deliver on promises and expectations.

The Scottish Tories may celebrate their “triumph” in this election but, as James Mitchell pointed out, “Labour won more constituency votes than the Tories and are in second place in 38 constituencies while the Tories are second in 17. If the SNP vote falls at the next election then the most likely winner is Labour.”

As for credible policies, Labour could do worse than linking up with the Greens on radical proposals to empower communities in Scotland, countering the SNP’s record of centralisation. Is not the moment when substantial new financial and welfare powers come to Holyrood the ideal time to hand powers back to communities across Scotland? Much more than a fundamental reform of local government finances (overdue since at least 2007) is necessary if Scottish local democracy is to be revived.

Fintan O’Toole recently commented in the Irish Times on the inclusion of “community empowerment” as “necessary for a sustainable economy” in the new Irish government’s programme: “neither a vibrant economy nor a just society will be possible unless people get power to make real decisions in their own communities.” Here in Scotland, we have found lip service to community empowerment in statements of all the parties. But – and O’Toole could well have spoken of the Scottish situation – “beyond an extremely vague promise of more powers for local authorities (not at all the same as more democracy), there’s nothing.” Words that newly-elected MSP Andy Wightman, the Green spokesperson on local democracy, would surely endorse. COSLA is starting a campaign for local democracy, based on the findings and proposals of its independent Strengthening Local Democracy Commission of 2014, with an open invite to all parties and groups concerned and interested. It’s a chance that should not be missed.

With a view towards the Local Elections next May, the stagnation of gender balance at Holyrood should give cause for concern. Despite the 50:50 campaign and the high visibility of three female party leaders in Scotland, the ratio of elected women at Holyrood remained exactly the same (45 MSPs = 34.8%). In Local government the ratio at the moment is around 26%. It might be time to legislate for gender quotas.

A vote for Leave on 23 June, while Scotland votes overwhelmingly to stay, would be a nightmare for Europe, and the mess of disentangling the UK from the EU while Scotland scrambles for independence from the UK to stay in the EU – would again dwarf Holyrood’s capacity for policy making. If, on the other hand, Brexit were avoided, Indyref2 would not be off the agenda but, for the time being, it would perhaps not be the first priority. The left-of-centre parties at Holyrood would perhaps be more likely to find common ground, concentrating their efforts on using the powers of the Scottish Parliament to build a better, more democratic and more equal Scotland.

James Mitchell, ‘Tories smiling but challenges ahead’, Centre on Constitutional Change, 10 May 2016;

‘Fintan O’Toole on an astonishing ideological volte-face’, The Irish Times, 10 May 2016; <www.irishtimes.com/opinion/fintan-o-toole-on-an-astonishing-ideological-volte-face-1.2641146>