ISIS’s violent assaults in Paris should lead to a political rethink among western leaders. But will they? By Paul Rogers 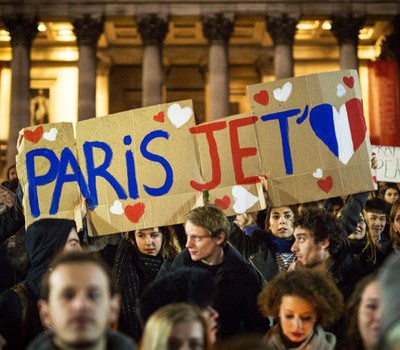 The ISIS assaults in Paris on Friday evening were carefully planned by a large team of three groups with at least eight men prepared to die. Some internal French involvement, perhaps limited, is possible. The operation had three components, each with a distinct target. The Stade de France attack was small-scale but large impact – its ingredients a modern national sporting icon, the occasion of a match with Germany, and the French president’s presence among the fans. The Bataclan theatre was hosting a popular American rock band, thus ensuring a very international audience. The café and bar attacks would result in persistent fear across a popular district of Paris and well beyond. Indeed the global impact is already huge, probably more than London’s bombs in July 2005, Madrid’s Atocha rail terminal bombs in March 2004, and even the Sari nightclub attack in Bali in October 2002. Paris is on a similar scale to the even more complex and long-lasting Mumbai operation in November 2008, which had a profound impact in India (but less so outside). Among western states, the effect is the biggest since 9/11, which was of course much greater still.

It has three purposes. The first is to demonstrate that in the wake of the destruction of Russia’s Metrojet over Sinai and the bombing in Beirut on November 12, ISIS has now gone truly international. Thus its modus operandi has reached the level of the loose al-Qaida affiliates in the post-9/11 years: Islamabad, Bali, Madrid, London, Jakarta, Istanbul, Mombasa, Amman, Sinai, Casablanca, Djerba in Tunisia – and many more. This is potentially a very major change since ISIS has so far concentrated primarily on its territorial base, in contrast to the old al-Qaida movement.

The second is to further damage intercommunal relations, not just in Paris but across western Europe and further afield. An accelerating Islamophobia suits ISIS in its quest to attract more recruits from recent diasporas and more established migrant communities, many members of whom now feel thoroughly insecure and greatly worried and even fearful of the hardening of attitudes towards them.

Accelerating Islamophobia suits ISIS in its quest to attract more recruits
The third is to provoke and incite France and other states to intensify the war against ISIS – in Syria, Iraq, and anywhere else that it, or its affiliates, make progress.

ISIS wants war. It presents itself as the true guardian of Islam under attack from the “crusader west”. This message, though pernicious and dangerous, is currently being encouraged by the progressive withdrawal of all Middle Eastern states from active involvement in the airstrikes against ISIS in Syria.

The air war in Syria was in early 2015 led by the United States with the participation of France, Australia, Canada, Bahrain, Saudi Arabia, the United Arab Emirates (UAE) and Jordan. In recent months, however, the four Arab states have ceased bombing. In addition, Justin Trudeau’s new government in Canada is withdrawing all CF-18 strike-aircraft from Syria and Iraq, and Australia is reported to have paused its operations in Syria since the Russians started separate air attacks (almost all against non-ISIS anti-Assad rebels). That leaves just the US and France. So in Syria at least, ISIS can easily claim that a “crusader onslaught” is taking place.

In an extraordinary admission, US intelligence sources say there has been a surge in recruits to ISIS in spite of the air war and the losses. In September 2014, 15,000 recruits were reported to have joined from 80 countries; a year later the figure had risen to 30,000 from 100 countries.

In blunt terms, ISIS is actually being strengthened by the air war, and it can be assumed that it wants more. The movement vigorously and insistently peddles the message of “Islam under attack”; and though it is disliked and hated by the great majority of Muslims worldwide, the message strikes enough of a chord with a small minority to serve ISIS’s aim of creating this purist if brutal caliphate.

It is possible that French and British political leaders and others will respond with care and forethought, rather than rushing into a more intensive war. But it is unlikely. The appetite to face up to the problems of the 14 years since 9/11 is absent, notwithstanding the efforts of a minority of analysts to point to the realities of this period.

The appetite to face up to the problems of the 14 years since 9/11 is largely absent
Afghanistan now faces a growing Taliban presence involving widespread control of many rural areas; Libya is a chaotic mess of competing militias and a growing Islamist presence; Iraq has seen over 30,000 civilians killed since the beginning of 2014 alone, and substantial parts of the country are now under ISIS control.

Across the Middle East and north Africa, close to 300,000 people have been killed and hundreds of thousands injured, while many millions more have been forced from their homes. Add the chaos and suffering in Syria and the spread of ISIS ideas in Afghanistan, the Caucasus and north and east Africa, and the terrible, large-scale failure – of western politicians, regional leaders and the wider world – is clear.

Will Paris lead to a rethink? No, that is highly unlikely. There is simply neither the wisdom nor the independent and able leadership anywhere across the western world for that to happen. Instead, and at least for now, further tragedies will unfold.