Only by altering the way we see things in general terms can we begin to deliver a fairer society. Robin McAlpine proposes ten changes of  mindset  to set us on our way 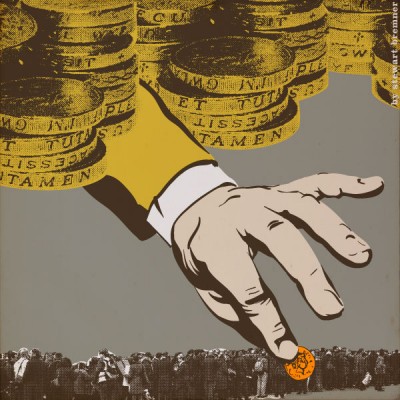 1. A POLITICS TO CARE ABOUT

For decades politics has been presented as a managerial process in which technocrats run society for the greater good and citizens award them points for success every five years. In 2014 Scotland broke that mould and there are signs of the political system breaking down right across the UK and beyond. We need to redesign politics as something people can understand, care about and be involved in. It isn’t difficult if you want to do it, but it does require that we abandon the corporate-fest that politics has become and talk about our future in a new language.

3. FIGHT FOR THE COMMONS

It used to be accepted that there were things we managed collectively for the public good – civic spaces, public amenities, law and order, a postal service, trains, NHS and so on. Then it became accepted that the only thing that mattered was that these things existed and the collective management of them was better done through privatisation and profit. It has failed dreadfully. The concept of ‘the commons’, the space where our individual interests coincide and where it only makes sense to work together rather than against each other, must be revived and championed. Only when the idea is properly articulated and defended will change follow.

We’ve been dragged down an ideological rabbit hole to a land where the only real merit is private profit. Things which create profit are idolised; things which create happiness are not. So ours is the age of consumer goods which we play with in our tiny, overpriced homes because there is no public space close to us where we can go and play with our children. We have designed the fabric of our lives to maximise profit but have not used 40 years of profiteering to maximise the quality of our lives. If joy matters to us, we need to rethink our priorities.

5. THE RIGHT TO HEAR

We’re told endlessly about the importance of free speech (although definitions of free speech are flexible and seem often to coincide with the interests of the powerful…). But we’re told nothing about our right to hear. Being free to say what we want into an empty void is not freedom; but a chance properly to be exposed to a diverse range of different views and opinions which will help us make informed choices about our future – that’s freedom. The concentration of media ownership – and the commercial imperatives of our failing media – mean that we do not hear many voices, but only the same ones over and over again. That’s not freedom.

6. POWER WHERE PEOPLE ARE

Power is like gravity – if you allow too much of it to accumulate in one place it starts to suck in everything, eventually even light. With gravity we call it a black hole. With power it tends to be called whatever the powerful want it to be called (efficiency, ‘wealth creation’, rationalisation, commercial confidentiality, even meritocracy). And once power is pulled together and put in the hands of a few people they seldom use it for the greater good. We must spread power and let people have access to real decision-making  for themselves in the places they live. None of us believe that the Chief Executive alone knows what’s best for us any more.

Despite what you’ve been told, money is not achievement in paper form. Humans did not become the dominant species on the planet on the basis of the bigger humans taking for themselves more of what was already there. We made things, created value in those things we made and improved our lives. From the need to create good jobs to the need to solve major challenges facing humanity, we need once again to value creativity, invention, ingenuity and craft. Until we put respect for creators ahead of respect for the rich, we will transform neither our economy nor our futures.

The divide between those who rule and those who are ruled has grown greater and greater. The concentration of power and wealth and its ever-greater separation from the rest of us means that those who have the biggest impact in shaping our lives often have the smallest understanding of us and the lives we live. The normalisation of attacks on those on benefits by those who created the economic conditions that require them to live on benefits shows just how little empathy is left in politics. We need to take steps to reconnect decision-makers to the lives of those their decisions affect.

There is no magic button that fixes everything. There is no single, simple solution which alone will cure everything else. No, cutting tax does not, on its own, fix everything. No, deregulation does not, on its own, fix everything. No, economic development funding is not ‘more important’ than funding for the arts. Everything we do, every decision we make, shapes our lives. We must stop trying to weld new strategies on top of old orthodoxies and imagine anything will change. Our desire to create change must be injected into every decision we make.

The Hippocratic oath has much to tell us. Again and again we blunder into actions which we are totally convinced are ‘what we must do’. Again and again we tell ourselves that the harm caused is a price we must pay. It is not. The harm is part of the action. It doesn’t matter whether it is climate change or the collapse of much of the Middle East into war, there are no such things are side effects, only effects. We can’t keep letting ourselves off the hook for the damage we do. As we try to make things better, let’s try not to justify making them worse.

Robin McAlpine is the director of Common Weal.