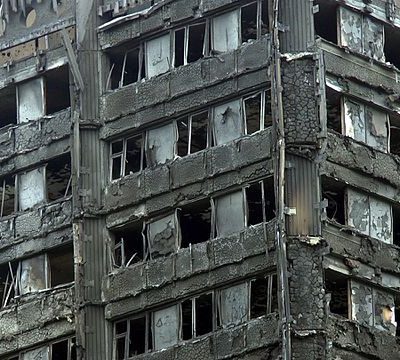 Before the fire, Grenfell Tower was a generic example of high-rise social housing. Constructed in 1972, the building stood at only twenty four storeys, an unexceptional structure – one of thousands of similar blocks across urban environments in the UK. These uniform concrete edifices are melancholic reminders of a post-war moment when the state took responsibility for the welfare of displaced urban populations and the squalid conditions many of them lived in. Inheriting models from Soviet experiments in Communist architecture, these blocks represented an attempt to realise a utopian vision of affordable, harmonious, clean, orderly living which would accommodate the urban masses of rapidly growing UK cities like London, Glasgow, Manchester and Belfast.

Towers are ubiquitous architectural forms intimately linked to expressions of power; the tower has evolved in complexity, height and material since the Ancient Egyptians first built monolithic obelisks to the Sun God Ra. As in many places in Europe and North America, the high-rise tower blocks of social housing in the UK participate in this symbolic economy of power in a somewhat spectral manner, as monuments to failures of governance – what were once symbols of collective endeavour, equality and the welfare state are the symbolic negation of monumental forms like One Canada Square, Big Ben and Nelson’s Column – variants of the same kind of phallic punctuations which express Britain’s particular political imaginary; puerile declarations of authority, empire and wealth. Across Britain, towers like Grenfell contain many of society’s most marginalised people- those who as bare life on the periphery of the concentrated economic excesses generated by urban centres. The disparity between these two poles of the tower form underlines the existence of two distinct lived experiences in a country where the political will to address inequality is absent. In the UK’s capital city, inequality is at its most concentrated and extreme. London’s tower forms symbolise this conflict between the individual and the collective.

The Tower of Babel one is one of the earliest accounts of collective architecture. In the Book of Genesis, Earth’s population discussed modern building techniques, selected a site in Shinar (encompassing parts of modern day Iraq and Syria) and declared:

“Come, let us build ourselves a city, with a tower that reaches to the heavens, so that we may make a name for ourselves; otherwise we will be scattered over the face of the whole earth.”

According to the Bible, having been united by the Great Flood, at the time of the building of the Tower of Babel, all Earth’s people spoke the same language. The ease with which humanity could communicate in a common tongue guaranteed that they could easily erect a monument to their unity. God was disturbed by what He saw; if his people could realise this kind of unified common goal, then they do anything and his omnipotence would be undermined. As such, God put a stop to their endeavours. His solution to this challenge to divine authority was to fragment language – to divide the social body by rendering individuals incomprehensible to one another. No matter how hard they tried, one human’s eloquent argument would be nothing but incoherent babble to another.

While the horror of the fire at Grenfell and the factors which contributed to its spread have thrust the reality of social inequality and austerity to the front of national consciousness, competing languages and discourses are battling for supremacy in the aftermath of the disaster as the future of those affected lies uncertain. In the shadow of what remains of Grenfell Tower, a piece of collective architecture was quickly assembled. As the official number of named fatalities slowly rises and many tenants still remain unaccounted for, tributes to the dead, pleas for information about the missing, declarations of love, hope, rage and despair have been scrawled across a wall near the site. A ubiquitous form of temporary memorial, makeshift walls like these are often erected near the sites of tragedies and disasters to afford the community a collective space to grieve. The variety of languages and alphabets inscribed upon the wall is striking; English, Spanish, Arabic, Hebrew, Swahili, Urdu, Mandarin are all visible; underlining the multi-lingual nature of the local population and the universal quality of their shared suffering. 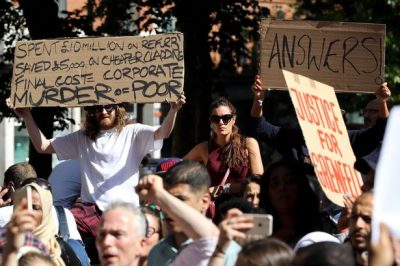 In linguist Mikhail Bakhtin’s view, any language contains within it many voices: “social dialects, characteristic group behaviour, professional jargons, generic languages, languages of generations and age groups, tendentious languages, languages of the authorities, of various circles and of passing fashions.” In a world where politics is played out via the media, paying attention to the words, accents and voices which are shaping the narratives around this appalling disaster while everything is still uncertain allows us the opportunity to observe the way language consolidates power, masks truths and perpetuates lies.

Over the course of the Grenfell tragedy and its aftermath to date, significant cracks have appeared on what feels like a large scale. Transgressive speech has begun to rupture through the dominant discourse. These spaces of instability are opportunities to seriously address the ethics, motives and reliability of the individuals and institutions who, by reporting and representing events are important mediators of information and social relationships and as such regulate access to the political realm. What responsibilities do these speakers have to those they are talking about? Who should we be listening to? What should we be saying in response to the criminal class oppression which has murdered so many of the tenants of Grenfell Tower?

Official meanings of words have been challenged and exposed as ideologically coded. “Red tape” no longer connotes petty bureaucracy which impedes productivity, but rather emphasizes the need to force corporations to consider basic human rights to safety. “Regeneration,” is now exposed as a phenomenon whereby the expulsion of working-class populations from their communities is celebrated by property developers, private landlords and home owners. The words “requisition of property” have been printed and taken seriously. Austerity practices and governmental neglect have been openly described as “social murder.”

In the days following the catastrophe it appeared that the tide was beginning to shift. New voices were being heard more loudly than old ones. Interviewers tried to mask their surprise at receiving articulate, informed responses addressing complex issues from Black and Asian Brits and immigrants – especially young ones – who were finally being asked their opinions. Mainstream UK media and the form of government which informs it, however, is still attempting to pull rank. Every day news broadcasts, the morning papers and political panel shows regurgitate and repeat the same reports, repeat the same cautious, tempered sympathy. While the scope and depth of structural failure and the institutional indifference to the suffering of vulnerable people is glossed over, the colossal gulf between societal strata in this country is exposed.

I watched several interviews on the day of the tragedy in which journalists openly reprimanded and apologised for interviewees swearing on live television. Amidst everything; dead children, missing people, people burnt alive in their own homes as a consequence of state neglect – horrors which are unspeakable in their obscenity; the word ‘fuck’ was the utterance which exceeds the boundaries of what is social acceptable. Victims badgered by the press to share experiences of grief, fear, rage and hopelessness – experiences which exceed the limits of language – in the immediate aftermath of the event, were reprimanded like children for breaking the rules of state broadcasting. Broadcasters sheepishly remind viewers that ‘emotions are running high’ and apologise for four-lettered abominations before the watershed. Swearing live on television then, is an unacceptable oral freedom amounting to a transgressive speech which, in exceeding acceptable political language and etiquette, exposes the ideological codes built into traditional television and print broadcasting and underlines their absurdity. In reporting a reality as offensive, depraved and obscene as the preventable deaths of at least 80 people – their right to safety and security wilfully ignored and supressed – the act of swearing enacts a Brechtian break and narrative rupture- a sympathetic victim becomes vulgar and offensive through their non-compliance and the media apparatus becomes unwilling to accommodate him or her within its theatre. Astonishingly, all broadcast news outlets continue to use the burnt-out edifice – which still has a number of unidentified bodies inside – as the backdrop to their reports, describing the building with a number of deeply insensitive transferred epithets –‘charred’ ‘scorched’ ‘blackened carcass of the building.’

The destruction of Grenfell Tower has been revelatory; illuminating the extent to which the notion of a United Kingdom is both a fantasy and a lie. The direct relationship between private profit and collective suffering has been confirmed. The reality of private conquest of public space was profoundly felt as hundreds of people slept on the floors of community centres, town halls and sports centres, while 1,399 luxury flats lie empty within the borough of Kensington & Chelsea.

Shock, horror and rage were felt across the country on the 15th June as the scale of greed and neglect which contributed to the worst UK fire in a century became known. While the dominant, agenda setting media narrative cannot ignore the rising and expanding fury, illusions of control are still very much still at stake. A government response which has been more insulting than helpful and a series of surreal royal appearances have drawn further attention to ideological basis of inequality and austerity in Britain. UK party politics and their leaders have proven themselves to be irrelevant, ineffective and in need of reform, while the marginalised, ‘scroungers’ and ‘segregated’ communities are seizing power and demanding the change that is desperately needed.

The revelation that poor people generally and Black and Asian people more specifically, can perform heroism, compassion and charity within an authentic community is quickly losing its novelty. The victims that the country wept for on 15th June have transformed back into economic parasites and potential terrorists who should shut up and be grateful that they are at least alive. People are asking too many questions, expressing too many opinions, making too many demands. The victims are saying “No” too often and too loudly – “No” to sub-par relocation and to performative public inquiries. Voices in the press are quickly turning against the astonishing collective response which – initially seeming to absolve the government and the elite of any material responsibility – has become ‘politicised’ as the angry shouts of ‘Fuck this’ are getting louder. Exceeding the boundaries of dominant language codes and etiquette is now absolutely crucial; our bad language, bad grammar and patch-worked accents need to form a collective communication if we are to topple the ivory tower and transform the discourse around social justice and inequality in Britain.