It’s time to protect books and those who create them, writes Jean Findlay 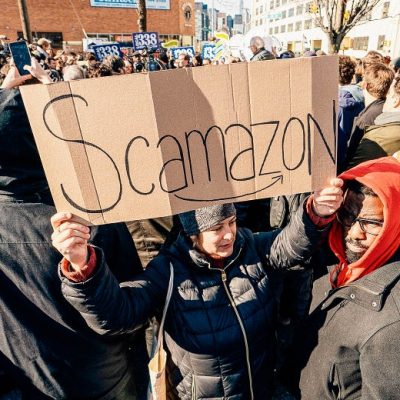 Amazon built itself up on the book industry.   It started off by selling books at discount prices and it could do so because it was incorporated at the time of the collapse of the Net Book Agreement.  This agreement protected books and meant you had to sell them at the price stamped on the back cover. When protection on book prices was abolished, competition in the market became a free for all, and Amazon came out king. Because of their success in books Amazon was able to diversify and become the giant it is today.  For publishers, booksellers and authors they are the Bad Giant, the local Ogre or The Beast. They take 60% of the cover price and undercut bookshops by selling at an immediate discount : Buy one get one Free and still make a profit. There is less left for the publisher who has to pay the author out of proceeds.

Philip Pullman in this summer’s Author magazine was asked, “ What single thing would you do with a click of your presidential fingers to make authors’ lives better?” and he replied,  “Restore the Net Book Agreement.”

In countries such as Germany and France where there is still a Net Book Agreement, prices are still protected.  Authors in Germany earn four times what a British author earns.

Owners of independent bookshops see customers find a book on their shelves, then order it on Amazon on their phone as they stand in the shop.  Shops cannot beat Amazon, so they must join them. As a small publisher it came as a shock to me that instead of questioning or confronting the Giant’s Extortion of 60%, many booksellers and wholesalers just imitate.  Many large bookshops expect to take a £10 book from the publisher for £4.  The publisher must then pay an editor, designer, typesetter, proofreader, distributor, warehouse, post office and author from the £4.  It is of course impossible.

In Germany and France where there is still a Net Book Agreement, prices are protected.  Authors in Germany earn four times what a British author earns

Instead of being a limited company, it makes more sense for a small publisher to be a registered charity.  That is a more honest reflection of what we do.  And instead of expecting sales revenue to cover costs, we must now raise it from benefactors or the cultural arm of the state.

The Society of Authors sets out protect authors from being exploited by publishers but in my case it is the other way round.  I often have to source author’s royalties from my own pocket because the revenue has already been taken by the many other stops in the supply chain. We all value books and their inspiring, civilizing effect on our lives but they are becoming cheapened and their creators impoverished.  We look for leadership.

So how can Amazon become a Good Giant?  The Selfish Giant in Oscar Wilde’s tale would not let the children play in his garden, so the garden withered and died.  It was not until he discovered sharing with the little people that the Giant’s garden produced flowers and fruit again. Corporate multinationals like to have a socially aware arm, proof that they are made of compassionate human beings and not run by machines. Amazon could open its garden to the small publishers and take £2, not £6 from a £10 book.  It would make all the difference to the Oscar Wildes of today.

And what can a benign government do to restore faith in our book industry?  Bring in a Net Book Agreement, where books are protected.  We may see ourselves as an economy that champions Free Trade in the abstract.  But books are different.  If we value them, we should protect them.