Artists who make music Musicians who make art brings together artists who straddle both worlds, as Ross Sinclair explains to Neil Cooper 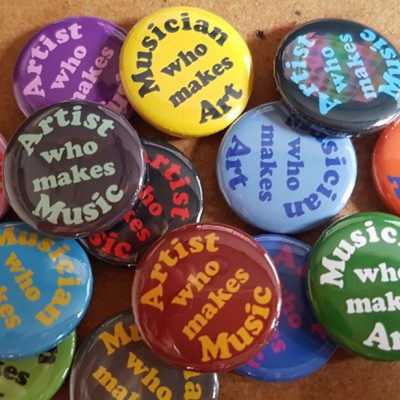 When Ross Sinclair designed the cover for the first album by his band The Soup Dragons, he was accidentally setting a marker down for the relationship between his artistic practice and his role as the band’s drummer. ‘this is our ART’ went the legend set on a painted five-pointed star that seemed to shimmer like a wild west sheriff’s badge. ‘USELESS, BORING, IMPOTENT, ELITIST AND VERY VERY BEAUTIFUL’. As revolutionary slogans go, it was tailor-made for t-shirts some of us still wear. The album was released in 1988, a few years after Sinclair had taken time out from his studies at Glasgow School of Art to join in with a nascent underground scene that saw the then Buzzcocks-inspired Soup Dragons play their first gig supporting a still jangly Primal Scream. That was at Splash 1, the Sunday night Glasgow Happening that recast Andy Warhol’s Factory in a sticky-floored 1980s neon-lit nightclub set to a punk/psych soundtrack played on cassettes. Thirty-odd years on, Sinclair continues to criss-cross between sound and vision as many of his Glasgow peers do in a city which has in part over the last twenty years or so of DIY activity gone some way to define a new wave of art-rock. “Artists who make music Musicians who make art” is a new exhibition curated by Sinclair that attempts to bring together the different strands of a crucial correlation between artforms through the work of 100 artists who move between the aural and visual.

“I’ve always been interested in the relationship between art and music,” says Sinclair in the midst of unpacking a mountain of material to cram into Queens Park Railway Club, the grassroots artist-run space overseen by Patrick Jameson and Ellis Luxemburg, who commissioned the show. “That comes a lot from my own experience of moving between art and music. I started at art school, then did the Soup Dragons, then went back to art school. There was that early experience of doing the record covers, and the exciting thing of doing multiples. Doing all that in the context of a band, it’s the perfect way of having a conversation with the audience, and developing a relationship with them. All the things I do now I try to get back to the simplicity of that.”

Artists in the show include Douglas Gordon, Graham Fagen, Vikki Morton, Michelle Hannah and Sinclair himself, all of whom are steeped in pop culture in a way that influences their work. Hanna Tuulikki has played in bands alongside her performance based work, while Carla Easton continues to sing and play with Teen Canteen. Jill Bryson from Strawberry Switchblade, will take part, as will Franz Ferdinand bassist Bob Hardy, Keith Farquhar, Susan Philipsz, Eugene Kelly of the Vaselines, Martin Creed, David Shrigley and Dougie Payne from Travis.

Other contributors include Craig Coulthard, Beagles & Ramsay, Ross Birrell and Clara Ursitti. Work from Edwyn Collins and David McClymont, both formerly of Orange Juice, will also feature. It’s hoped as well that actor Tam Dean Burn will perform new play by Bill Drummond based on the latter’s 10 Commandments of Art, originally written in 2014 to coincide with the launch of The 25 Paintings, set to travel the globe for the next quarter of a century.

“In some ways doing the show feels a bit like doing something similar 25 years ago,” says Sinclair, “where you’d ask your pals to do something, and they’d drop something off. Except now some of your pals are Turner Prize winners and what have you, so there’s a real international feel to things.”

Queens Park Railway Club itself is key to the aesthetic the show is exploring. “They’ve done loads of things here,” says Sinclair. “It’s a really crazy space, because you’re literally on the platform of Queens Park Station, standing looking at everyone getting off the train. When they asked me to do a project, I decided that rather than just do a show, I’d try something else.”

In 2014, Sinclair collaborated with the Collective Gallery in Edinburgh on 20 Years of Real Life, a project that marked two decades since the beginning of a 23-year performance project that began with Sinclair getting a tattoo of the words ‘Real Life’. This latest project saw him work with teenagers to create five bands, most of whom performed in the gallery at the launch of a compilation album they played on, titled Free instruments for Teenagers.

“That made me want to explore the community of artists and musicians who are around, but who can be kind of invisible to each other,” says Sinclair. “A lot of the time now things are done through social media, but I wanted to make something real.”

“I like the fact as well that Queens Park is an artist-run space, and if an institution had asked me to do it, I don’t think I’d be so keen. I think the scale of it would kill it, whereas this feels right. It’s much more punk rock, and is kind of a snapshot of what’s in the air just now. Obviously I’ve arranged folk, so everyone involved kind of satellites around me, but I think you could do two or three similar things made up of work from the generation below me. Queens Park is perfect for that. It’s very much about showing things that wouldn’t get shown anywhere else.” 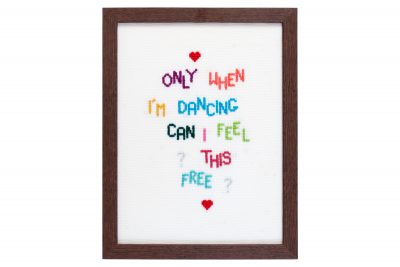 The relationship between art and music is far from a new thing. Ex art school students from previous generations who turned pop include Pete Townshend, John Lennon, Brian Ferry and Brian Eno, while punk was in part founded on art school sensibilities. Record sleeves have long been used as canvases to wrap the music in, from Andy Warhol’s cover of the first Velvet Underground album, through to Peter Blake’s sleeve for the Beatles’ Sergeant Pepper’s Lonely Hearts Club, Richard Hamilton’s cover for the White Album and beyond.

“I think interesting places that have really strong art schools tend to have really good music scenes,” says Sinclair, “and obviously in Glasgow over the last twenty years or so, both the art scene and the music scene have been pretty extraordinary. Obviously I work at Glasgow School of Art, and I’m really interested in the loose connections that exist that go right back to Postcard, and I think it’s a symbiotic thing. The Glasgow art scene, maybe not so much now, but it’s always been artist-run and self-determined, and that really fitted in with the independent music scene.”

“Again, there’s a community thing I’m interested in, and I think that’s something about Glasgow and Scotland, that everyone bar Martin Creed, whose phone number I had was so old it didn’t work, are people I know and who I could just ask.”

Arriving a few months before the opening of Rip It Up, the National Museum of Scotland’s major historical exhibition of Scottish pop, Sinclair’s “Artists who make music Musicians who make art” show’s specific context aims to avoid nostalgia. Given the pedigree of many artists taking part, however, some kind of sense of taking stock may be unavoidable. Especially as Sinclair’s fellow former fellow Soup Dragons, singer Sean Dickson, now known as DJ Hi-Fi Sean, and bassist Sushil K Dade, who has recorded extensively as Future Pilot AKA, both have work in the show.

“It’s not a memorabilia show,” says Sinclair, “although I did go up to see Bobby Bluebell, who has this archive of folders from 1979 onwards, with all these brochures and posters that are the sort of things people pay a fortune for on EBay. This show isn’t about looking back, and although there’s a sprinkling of that, it’s forward looking enough to suggest that it could happen again with a completely different hundred artists.”

A mooted fanzine and a film about the show joins the dots right back to Splash 1, as well as to Sinclair’s design for the band’s This is Our Art album cover. Useless, boring, impotent and elitist all this may still be, but the fact that musical and artistic connections forged more than three decades ago are still ongoing in a creative way remains very, very beautiful.

“I continue to be fascinated by the art and music thing,” says Sinclair, “and if somebody asks me to do a show, I find myself picking up a guitar and strumming out these noodles. It uses a different part of the brain. The art thing uses the front of my brain. When it works, they meet in the middle and there’s a really nice balance between them. I like this idea of an artist doing music, and vice versa, and to see if it feels different. This show in part is trying to look at all that in a quiet way, and to try and see how it all works. In that sense, it couldn’t be more the opposite of stepping into a shiny gallery.”