Since 2014 Scotland has somehow broken with long tradition by turning defeat into victory, writes Katriona Gillespie 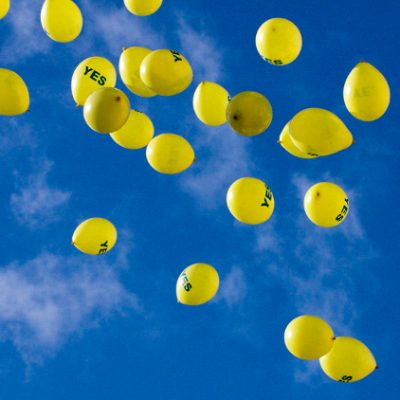 “Defeat may serve as well as victory to shake the soul and let the glory out.” – Edwin Markham

It’s interesting to reflect that it is through defeat in two successive referenda that the left-leaning majority in Scotland have found the courage of their convictions. A majority of young, middle-aged and progressive Scots voted both Yes to independence and also voted to remain in the EU. Following a long and sometimes divisive campaign, and ultimately a vote to remain part of the UK, Scotland has been coming to terms with the distinctiveness of its political identity and its disconnect with the Westminster establishment. Yes or No, Scots subsequently returned the highest number of SNP MPs in history to Westminster, made them the 3rd largest British party and followed up by giving the SNP a third term in the Scottish Parliament. And Scotland voted to remain in the EU while England and Wales voted to leave, a manifestation of what the First Minister described as Scotland’s “inclusive and forward-looking” values.

Those Scottish voters supporting an internationalist, socialist nation state have found their soul through defeat. The only thing more exciting than the engagement across the country during the Indy Ref, across all social groups and persuasions on both sides of the argument, was the day after the result. The morning after the night before was sobering in many respects, but the outpouring of emotion around what had been achieved was followed swiftly by an enormous rise in membership for the pro-Indy parties and a sense that politics was changing in Scotland from the grassroots up.

The morning after the EU referendum felt much the same. Yes posters went back up in windows as Nicola Sturgeon declared that Indy Ref 2 was “highly likely”. Again, there was a sense of energy in defeat. Scots had again found a purpose and resolve, this time a determination not to be undemocratically removed from the EU against their collective will.

This seems a good time to start celebrating the values of a modern, inclusive Scotland

And Scots may well now have the chance to revisit their decision to remain part of the UK sooner than expected. After the Indy Ref, there was consensus for change and a thirst for a new politics, not least from new voters aged 16 and 17 and those from previously marginalised groups registering to vote for the first time. But the momentum for change did not particularly translate into momentum for a second Indy Ref: though demanded in some quarters, elsewhere the sense of fatigue was palpable. What a difference a year or two makes.

Landslide wins for the SNP in the Westminster and Holyrood elections and most decisively, the geo-politically split EU referendum vote have brought the timetable for Indy Ref 2 into sharp focus. David Cameron, in his resignation speech, indicated that a new Tory leader will be in place by the autumn of this year at the latest. The new Prime Minister will be responsible for negotiating Britain’s departure from the EU within a timescale of 2 years. Nicola Sturgeon has indicated that she would seek to assure Scotland’s continued membership of the European Union within the same period. And of course, there needs to be time for negotiations, meaning that a second Indy Ref will be a live issue throughout 2017 and indeed is likely to take place next year, legislative agendas permitting (though as the SNP and the Greens, both pro-Indy parties, command a majority at Holyrood, it is unlikely that legislative processes would be held up).

So how likely is it we will see an independent Scotland within the EU within this parliamentary term? Scotland unequivocally qualifies for EU membership. It fulfils every criteria laid down by the EU, is an existing member and every Scottish citizen is also an EU citizen, entitled to free movement and equal treatment throughout the EU.

The assurances of the No campaign during the Indy Ref to vote for the status quo and avoid risk now ring hollow. We know that Britain is leaving the EU and so we can’t protect our membership by remaining part of the UK. We can also see from the response of the markets to the UK leave vote that there is no immunity from the world economy whatever political choices we make. More pragmatically, any putative veto from the UK is unlikely to be taken very seriously even if proferred by the departing member. And in terms of real politik, the EU would like in general to see wealthy, responsible European nations, of which Scotland is undoubtedly one, in the club. The benefits for the continent would include retaining access to a quarter of the seas in Europe; the advantage of political capital gained at the departing UK’s expense a bonus.

It seems unlikely there is a road map to continued EU membership that does not include independence for Scotland. Even alternative constitutional modes of engagement such as those followed by Norway and (currently) Iceland are based on nation statehood. It is very unlikely that a UK in flux would devolve foreign policy in particular, so realistically Scotland could only gain additional leverage and autonomy in this area through an independence vote.

The majority of Scots value their EU membership, as demonstrated by the blanket and decisive EU referendum result. It remains to be seen whether the anecdotal evidence of No voters changing their minds in the wake of the EU referendum result translates to a new majority in favour of an independent Scotland. However, there is increasingly insurmountable evidence that politically, Scotland has, in Alec Salmond’s words, “changed… and changed utterly”. Since we can’t put the genie back in the bottle, this seems as good a time as any to start letting the glory out and celebrating the values of a modern, inclusive Scotland.