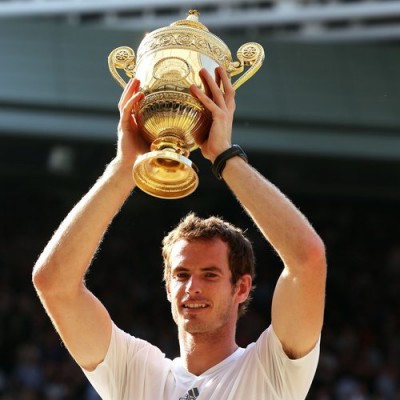 Happy Andy Murray Day. It’s exactly a year since the eruption of joy as Murray raised the Wimbledon trophy aloft on that magnificent sunny afternoon. Most of us know where we were when Djokovic’s return hit the net cord on championship point and the party kicked off. Murray means a great deal to Scotland and his legacy can still be harnessed in the cause of social change.

His rise coincided with the decline of the Scottish football team, charged with breathing life into the dream of a dashing, dazzling Scotland long after they had ceased to be able to do any such thing. We were struggling in other sports too. We were also-rans in international competition, and no-one knew what to do about that.

So here was this gangly man-child from Dunblane, lifting the US Open Junior trophy in 2004, and looking very much like what the Americans call the real deal. At 15, Murray had relocated to a reputable tennis academy in Barcelona, learning his trade with the best clay court players in Europe, Djokovic and Nadal amongst them. It showed. He soared up the rankings. By 2008, he was the world’s fourth best tennis player, a position he held for the following three years. By 2012, he was Number 3 – testament to an epic talent and work rate.

Stubbornness, hard work and mesmeric ability are qualities Scots fancy themselves as having in abundance, even as we sit munching crisps in front of the TV

The traits that made Murray such a success – righteous stubbornness, hard work and innate, mesmeric ability – are qualities most Scots fancy themselves as having in abundance, even as we sit munching crisps in front of the TV. Yet the further Murray got to the summit of the game, the more he couldn’t quite cross the line and win a prestigious Grand Slam. He lost four Grand Slam finals in a row.

So the narrative changed, tapping into our worst fears about ourselves. Murray was at best a bottler, a nearly man. Deep down we knew we were duffers, uniquely capable of fashioning failure from the most promising situations. Murray’s failure to win a slam just confirmed it. He was the Caledonian Antisyzygy made flesh.

Many players might have been crushed by that. But Ivan Lendl urged Murray on. At the Olympics, he won gold, finally vanquishing Federer on the Wimbledon grass. From there, he marched on to cathartic victory at the US Open, the first “British” man to win a grand slam for over 70 years.

All this was the back-story carved in the public imagination on that spellbinding day last July when Murray strode onto Centre Court, delivered a performance of swashbuckling bravado, and won the biggest prize in tennis.

God loves a trier, and all the world seemed to delight in Murray’s achievement. A reporter asked a woman on the street in Dunblane for her reaction. “It’s fantastic” she beamed. “It means that now when people think of Dunblane, we’ll be known for something else.”

My guess is that Andy Murray will return stronger after exiting this year’s Wimbledon at the quarter finals. He has the tenacity and talent to deliver more Slams, more days in the sun.  But it’s worth considering how Scotland can capitalise on having produced a Wimbledon champion. Those looking for the “new Andy Murray” will be disappointed. There isn’t a Scottish player in the men’s game who looks like breaking the top 100 anytime soon.

Last year, the Tennis Scotland, the sport’s governing body, announced £5.8 million to invest in the game over four years. It looks like a decent game plan to promote community tennis, upgrade courts in public parks and develop indoor centres. Still, it’s peanuts compared to the millions generated by Wimbledon. Tennis Scotland say the number of people playing tennis in Scotland numbers has leapt since 2008. They say they’re taking the game beyond the leafy suburbs and into deprived urban areas, and point to a posse of promising kids at Under 14 level.

Fine as it is, Tennis Scotland’s plan reveals the choice that has to be made on the back of the Murray feel-good factor: are we to spend resources cultivating a new generation of elite athletes capable of competing at the top of the game, or focus on massively increasing participation to offset Scotland’s depressing public health record? Looking at the Scottish government’s most recent statistics for obesity alone, the answer seems clear. In 2012, 31.6% of Scotland’s children were classed as overweight or obese. Amongst adults 64.3% in Scotland aged 16 or over were overweight or obese. (Source here.)  The figures mirrored those of 2011. The pattern has hardly changed in years, and will only worsen if nothing is done. Against this background, increasing participation in tennis as part of a wider health policy must be worth considering.

One in five of Scottish children now live in poverty. In some areas, it is now one in three.

One in five of Scotland’s children now live in poverty. In some areas, it’s as high as one in three. Last week official 2012/13 child poverty statistics for Scotland revealed that 30,000 more children are now living in poverty. John Dickie, of the Child Poverty Action Group said: “These figures mark the turning of the tide on child poverty as UK Government tax and benefit policies slash family income at the same time as wages stagnate”.

How do we answer this? A few weeks ago, the Scottish government published a report “Giving children and young people a sporting chance.”  If you can wade through the jargon, it begins to pull together some of the policy strands which need to come together to be effective.

The report’s authors asked 3,000 children in Scotland about sport and how they used it. One of the report’s contributors’, the Children’s Commissioner, made a short animation airing children’s views on sport. Children knew sport facilities weren’t always open. There wasn’t always someone to take them; if it was too far away, they had to get the bus, and they didn’t have the money.

All of which takes us into economics. The point has been well-made by the Common Weal that placing the market at the centre of our politics does not work, and will never deliver the social goods Scots want. And a move away from market-driven economics can only come with political power, through Yes.

We need to start by kicking McDonalds and Coke out of our schools.

Thereafter it can’t be business as usual, with the same old compromises and recurrent failures. We need to look again at the poverty of life chances in Scotland. We need ideas that reshape everything from diet to schools, employment to exercise, urban planning, access to sports facilities and much else. We need to kick McDonalds and Coke out of all our schools.

By winning Wimbledon, Andy Murray changed the way we see ourselves. That he had laboured so long and tried so hard made it all the sweeter. There was irony in seeing a Scottish victor on the quintessentially English Wimbledon lawns, with all its echoes of Empire, just as his country debated leaving for a brighter day. But it may have been a one-off achievement, and something of a luxury. We need to ensure that our children are not poor, fat and alienated before we concentrate on producing another world-class tennis champion.