By saying nothing, the RBGE board hoped opposition to axing Inverleith House would dwindle. The opposite is happening, writes Neil Cooper 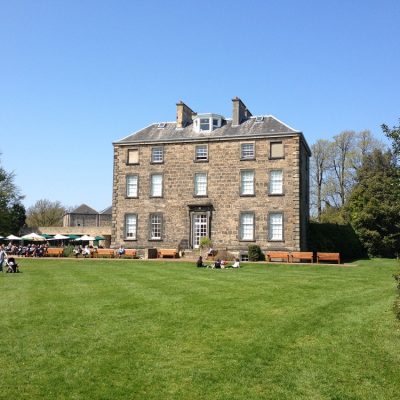 As dusk fell on October 23rd 2016, Inverleith House, the internationally renowned, publicly-owned contemporary art gallery housed within the Royal Botanic Garden Edinburgh, closed its doors. It was the final day of I Still Believe in Miracles, a thirtieth anniversary exhibition that brought together work by some of the most celebrated artists in the world, who had all shown at Inverleith House during its astonishing artistic life. This wasn’t just a normal exhibition closure, however. Earlier that week, it had been reported that Inverleith House would no longer be continuing with a dedicated contemporary art programme, and that I Still Believe in Miracles was likely to be the last exhibition to be held in Inverleith House. On the day of the closure, Product published an open letter to RBGE’s board of trustees posing twenty-three questions. These were in response to what appeared to be a lack of transparency regarding a then-unseen publicly funded report, A Future for Inverleith House, drafted by Glasgow-based commercial consultants, Kelly and Company. Amongst other things, Product asked why the staff of Inverleith House had been instructed not to speak to the media.

The questions can be found here – https://www.productmagazine.co.uk/ideas/open-letter/

Three months on, and despite numerous requests to RBGE, no answers have been forthcoming. Product has repeatedly informed RBGE that any answers they give will be published in full. Product has also asked RBGE that if they are unable or unwilling to answer the twenty-three questions, if they could explain why. Again, they were told that their answer would be published unedited. This is to ensure that RBGE is not misrepresented in any way.

RBGE’s press office has assured Product that written answers to the questions will be given shortly. Should they ever materialise, these will be posted in full.

A petition calling for RBGE’s decision to be reversed, initiated by journalist Joyce McMillan, has at the time of writing received more than 10,000 signatories. It can be found here. – https://you.38degrees.org.uk/petitions/prevent-the-closure-of-inverleith-house-edinburgh-as-a-public-art-space

The gallery’s enforced closure itself saw an estimated 700 protestors visit Inverleith House for what was styled by organisers the Scottish Contemporary Art Network as a mass visit.

As the petition grew, another open letter was drawn up. Drafted and signed by more than 200 major artists and high-profile figures including Richard Demarco, Douglas Gordon and Tracey Emin, it was sent on November 8th 2016 was addressed to Sir Muir Russell, the former Scottish Government civil servant who is the chair of RBGE’s board of trustees.

Other signatories of the letter included actors Val Kilmer and Ewan McGregor. As some wag pointed out, if Inverleith House has Batman and Obi Wan Kenobi on side, the not-so-super villains who closed it had better watch out. The letter can be found here – http://www.saveinverleithhouse.com/open-letter.html

In truth, such vital high-profile support is up against a form of cultural vandalism that attacks, not with Hollywood high kicks and light sabres, but with the furtive cunning of middle-managers doing a stock-take. 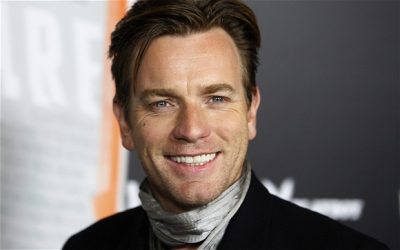 On November 18th 2016, a redacted version of A Future for Inverleith House was released to several publications, including Product, following a Freedom of Information request from the Herald newspaper. If documents released by way of an FOI are redacted, with some material blanked out, it’s often for reasons of commercial sensitivity. The report was released on the final day of the deadline required for a response to all FOI requests.

At the time of writing, A Future for Inverleith House has yet to be published, either on RBGE’s website or anywhere else in the public domain, as Product was led to believe would be the case.

Over fifty-five pages, A Future for Inverleith House makes numerous proposals regarding the best ways for Inverleith House to move forward. Some of these are sensible and achievable, others less so. Such is the way of reports like this, which must attempt to cover all bases. At no point, however, is there any recommendation that RBGE should abruptly shut down Inverleith House’s art programme without warning, without any apparent public consultation and without any meaningful statement of intent regarding its future.

Holyrood has been oddly quiet on the subject other than a supportive tweet from Culture Secretary Fiona Hyslop and the announcement of a yet-to-be-convened working group. But at Westminster, an early day motion tabled by SNP MP George Kerevan has thus far been signed by sixteen MPs. The motion can be found here. – https://www.parliament.uk/edm/2016-17/712

Meanwhile, in a badly-lit corner next to the toilets of the John Hope Gateway building at the main West Gate entrance of RBGE, an exhibition of thirty posters for exhibitions shown at Inverleith House can be seen. At the entrance of the exhibition, called I Still Believe..., the name of every show seen there over the last thirty years is listed. Its classicist formality gives it the air of a monument.

As autumn turned to winter, the doors of Inverleith House remained closed, and Product’s questions remained unanswered. In December, the 2016 Turner Prize was awarded to painter and sculptor Helen Marten. This was for works that included projects at the 56th Venice Biennale and her solo exhibition, Eucalyptus Let Us In, seen at Greene Naftali in New York.

Although the announcement of Marten’s win largely met with quiet admiration, former UK Cabinet Minister Michael Gove tweeted his disapproval, describing Marten’s work as ‘modish crap.’ Gove had previously commented that the Turner Prize “celebrates ugliness, nihilism and narcissism – the tragic emptiness of now.” Given that over the last thirty years Inverleith House has shown the most Turner Prize winners and nominees outside of the Tate Gallery in London, this brings us back to RBGE’s ongoing closure of the space. 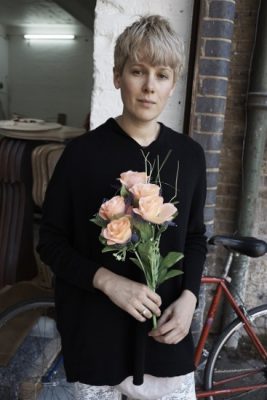 The opinions of RBGE’s senior staff on contemporary art are not on record. Nor is it known what arts-based qualifications are held by the RBGE staff who sanctioned the closure. It is worth noting that Inverleith House’s Director and Curator of Exhibitions for the last thirty years, Paul Nesbitt, is a qualified botanist.

Whatever the views of senior RBGE staff on contemporary art, they don’t justify the closure of a gallery which has been at the centre of Scottish life for fifty years, ever since Inverleith House became the first home of the Scottish National Gallery of Modern Art. It does call into question why anyone seemingly lacking any knowledge of visual art was appointed to take decisions for an organisation sporting an adored and internationally-respected art gallery.

This is the real rub of the sorry saga that has given RBGE more negative publicity than it has had in its entire history, and which has damaged the reputations of those who sanctioned a decision from which they now appear to be back-tracking.

In December, RBGE’s Regius Keeper Simon Milne appeared on TV and radio suggesting that RGBE and Inverleith House will continue some kind of arts-based programme. But what exactly does he mean?

What will any future RGBE visual art programme consist of? Who will curate it? Will it be a curator who is a trained botanist with thirty years worth of experience highlighting the symbiotic relationship between art and the natural world, as is the case with Paul Nesbitt? Or will this once amazing space for thrilling and challenging art be reduced to showing bland job lots designed to brighten up department store cafeterias?

The vagueness of RBGE’s language echoes that used by the property developers currently trying to buy up every patch of public land in Edinburgh and beyond. Similarly vague noises regarding artistic provision in various high-rolling constructions are made, only for them to be mysteriously airbrushed from the blueprint once bricks and mortar are in place.

This is plain from the proposals of the developers and hoteliers currently attempting to turn the City of Edinburgh Council-owned old Royal High School – a shamefully neglected historic site once mooted to become the home of the Scottish Parliament – into an elite hotel. It’s plain too in the ongoing proposals for other hotel developments in Edinburgh in the Cowgate and King Stables Road. 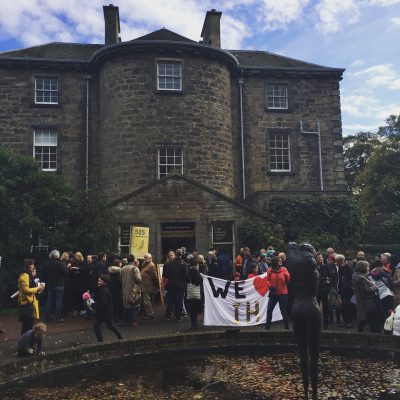 What sort of artistic provision RBGE is suggesting for Inverleith House remains unclear, as does how its dismissal of the A Future for Inverleith House report tallies with whichever way the organisation proceeds. Whether such a seeming contradiction might work within the long-awaited working group remains to be seen.

While the working group will consist of still yet to be named representatives from Creative Scotland and other interested bodies, it isn’t clear yet whether Paul Nesbitt will be included. Given that he has included a botanical frame of reference in every Inverleith House show during his tenure, and that he understands the relationship between art and the natural world in a way that senior RBGE staff patently do not, his presence in all discussions is vital.

Under RBGE’s current management, there is no apparent will for Inverleith House to remain as a committed contemporary art space, and any talk of Inverleith House not washing its face financially is a red herring. Questions need to be asked too regarding any future commercial events already booked into Inverleith House, and what role Sodexo might play in them. Sodexo is a multi-national company based in France who deliver retail catering, restaurant, public cleaning, sales, marketing and events services at RBGE.

The decision by RBGE to close Inverleith House was at best ill thought-out and seriously misguided. It was made even more so by the – to be kind – naïve belief that the door of Inverleith House could be locked on October 23rd 2016 without any announcement, and that nobody would notice, let alone kick up a fuss. The decision was also ideological.

Inverleith House is the latest victim of an ongoing culture war being conducted quietly but effectively by managerialists, bureaucrats and social engineers who think only in terms of financial gain, and who would rather shut down all artistic activity that doesn’t act as a pacifier. Anything complicated, awkward or noisy, anything rooted in ideas and truth rather than sentiment or kitsch, or anything that just can’t make a buck, is no longer considered valid for these post-truth, anti-intellectual times.

So when RBGE say that Inverleith House can’t wash its face financially, and when Michael Gove describes Helen Marten’s work as ‘modish crap’, these are the dispatches of a philistine establishment who, as Wilde wrote in The Picture of Dorian Gray, ‘know the price of everything and the value of nothing.’ Wilde also had plenty to say, incidentally, concerning the relationship between art and nature.

The decision by RBGE middle managers to shut down Inverleith House’s contemporary art programme is the unintended epitome of Gove’s soulless rhetoric regarding ‘the tragic emptiness of now.’ Those who made the decision, and those like them, will continue to rake over stony ground, stamping out any blossoming of artistic life they can’t quite get their bean-counting heads around. It may take a miracle to make it happen, but if Inverleith House is not reclaimed by the public to whom it belongs, those behind its closure won’t be the only ones living in the wilderness.

If you see me, weep

Groover of The Week