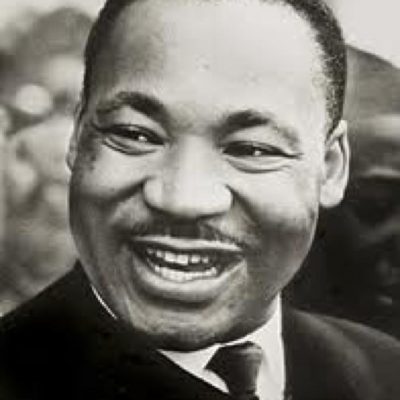 Alan Small lived in Atlanta with his family from 1967-1968 and joined the mourners on Martin Luther King’s funeral. Here, from a recording made just after the event, he recalls the intensity of the day

Tuesday came and the day was divided. First, there was to be a private service in Ebenezer Baptist Church, where Martin Luther King served as co-pastor with his father. We decided we would watch the service on television and join the march afterwards. The service itself was extremely moving. The first funeral of a black person to be nationally televised. The first funeral service of someone who was not in the government which had been attended by so many national figures. People like Robert Kennedy, Jacqueline Kennedy, Senator McCarthy, vice-president Hubert Humphrey, Governor Rockefeller, Governor Romney, Richard Nixon, and Mayor Lindsay of New York. By the time we got to our spot overlooking the street in front of the state capital, there was a powerful air of expectancy. A good deal of police, TV cameras set up at vantage points. Helicopters overhead. A feeling that no one was quite sure what was going to happen. And then over the brow of a hill away to our right half a mile away we gradually heard the noise of the march which was being preceded by the coffin containing Martin Luther King’s body. I will never forget the visual impact of the scene as a mass of people – the number has been variously estimated as anything from 75,000 to 150,000 – came over the hill towards us and the street, four lanes wide, was jammed solid.

I had my camera with me and was all set to take some colour photographs of the scene. But somehow when the coffin drew level with us I simply felt that I was too emotionally involved in the situation; that to take photographs would have been completely inappropriate. As soon as the coffin appeared I could not be a spectator who was standing apart. I was involved and I was committed and I became a participant in it. I put my camera down. I would not need a photograph or a colour slide to remind me of the scene.

Having let most of the immediate march past we simply left our place on the sidewalk and joined them. The three or four short steps from the pavement to the march appeared to be an act of commitment. As long as you were on the sidewalk you could act as if you were an onlooker, a spectator watching the action but not involved in it either physically or emotionally. But as soon as you were part of the march you were identified with it. This went a lot further than just simply identifying with the death of Martin Luther King. For me it meant emotionally, and I hope at an intellectual level too – a commitment to the causes he lived for and eventually the causes he died for.

The Southern Christian Leadership Conference (SCLC) had decided that in order to convey an impression of the causes which had been dear to Martin Luther King his coffin should be carried in an old four-wheeled wooden farm cart and that this should be drawn by two ordinary farm mules, brought from a farm just outside Atlanta. The symbolism of this is that the mule is the means of power used by the poorest sharecropper, the means by which he hauls all of his materials and ploughs the land. 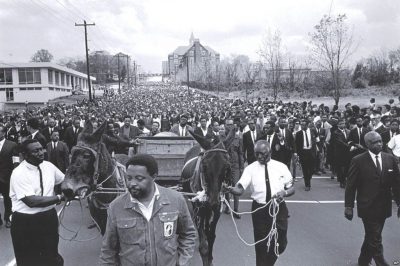 Martin Luther King was essentially concerned with establishing the dignity and the worth of black people within American society, but also with the plight of poor white people in the Appalachians, the poor whites who had flooded north to Chicago. It is extraordinary to think that [when he was assassinated] he was in Memphis trying to establish better conditions of work for garbage workers in the city. Almost entirely made up of black men, these workers were not allowed to be members of a union and had very low wage levels. King himself, the son of a Baptist minister, always said that he had grown up not being conscious in his own house and family life of want or need and privation, and yet he had this acute awareness of the needs of other people who were less fortunate than himself. This man was supra-race, supra-national, supra-denominational, supra-political.

It is hard to put a percentage on the number of white people who were making up the march. I reckon probably 10 to 15 per cent. And yet one had a profound feeling of community with the black men and women marching. They seemed to accept our presence, to be in a deep sense forgiving, and yet conscious of their dignity and demanding justice and freedom to be full members of American society.

King was a giant of a man who spoke in non-violent terms to a violent society
The heat was tremendous – it was about 80 degrees, the hottest day of the Spring. We marched in close formation, four lanes abreast, stretching for about a mile. There were times where the highway dipped down to a hollow and if you looked forward or back all you could see was a solid mass of people.

The noise was the noise of singing, almost all of a religious nature. Some well-known Negro Spirituals, others hymns we are familiar with in Scotland. In the context of the march through the city, these hymns and the words of them appealed to me in a completely new light. I have found that church music – the words and the symbolism – has increasingly meant very little to me. I’ve found it very hard to even be able to sing. But now even hymns such as ‘I’m Not Ashamed to Own My Lord’ I was able to sing and mean it.

And for the first time I was conscious of the power of non-violence. I can imagine few more powerful groups than that group of people who were marching. I felt it and it was very real to me. 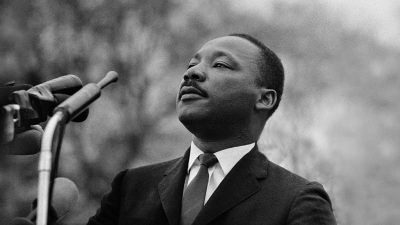 Thinking of Martin Luther King in these terms, one was able to accept the presence of so many very famous people. Marlon Brando was marching just to my left, talking to Walter Reuther, and on my right just within a few yards Sammy Davis Junior was marching along talking with Eartha Kitt. And yet in no sense did one feel the need to get near these people or want to hear what they were saying or ask for autographs, or any of the ways in which one would normally react to them. Because in the context of the march they became, not insignificant, but their significance had to be interpreted in the light of Martin Luther King.

The march proceeded with almost continual singing by the crowd. Marching through the residential areas so many of the houses at the side of the street had opened up their yards and set up tables and were offering cold water.

Following the funeral service, we walked back to Atlanta and stopped and sat on the steps of a negro Baptist church. Two black women in their fifties or sixties came around the corner and asked us if we were hungry. They said, “they have food and cold drinks downstairs below the church and you’re welcome to go down”. My friend introduced me as being from Scotland. And these two women reacted in an amazing way. They assumed that I had come from Scotland to attend this funeral service, and they were quite ecstatic about this.

It was the kind of situation where one felt, what should one say? I felt it would be better for them to think that I’d come to attend. They then started to talk and one of them said to all of us, “they’ve killed our leader, they’ve taken him away – and we needed him.” Then they said, “but you’ll never know how much it means to us that you” – and she meant us as representative members of the white community – “have come and have shared”. And in that situation, one got a glimpse of the tragedy and yet I hope in a way the victory, too.