Can hunger stones, a chilling ecological warning from our ancestors, help inform new thinking on how to save the future? By Alex Elliott 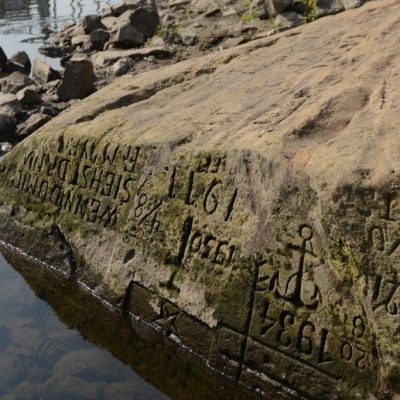 Found at various points in the river Elbe, hunger stones are a record of particularly severe droughts in central Europe. One stone, that has become something of a tourist attraction, has the years 1417, 1616, 1707, 1746, 1790, 1800, 1830, 1842, 1868, 1892 and 1893 carved into its sides. The stones emerge intermittently as water levels fall, carrying warnings, mostly involving tears of some kind; “We cried – We cry – And you will cry” or the even less cheerful, “Who once saw me, he cried. Whoever sees me now will cry” and finally, the at least slightly congenial, “If you see me, weep”. The motivation for the creation of hunger stones and their periodic resurfacing is an intriguing philosophical question. Hunger stones record suffering carved into rock, for future communities to read, but to what end? Our relationship to the future is difficult to grasp, but the anonymous sculptors of environmental crisis are particularly puzzling, although strangely intuitively relatable. In general, relating to the future is a difficult matter, especially a distant future. Think about, for example, those who blast a recording of Mozart deep into space across unimaginable distances, with no mechanism for its retrieval, for intelligent life that may or may not exist or be able to listen to it, let alone enjoy it, do so, perhaps, out of a sense of duty to the distant future. So that earth, after countless generations of humans over several hundred, if not thousands of years, may be visited by aliens demanding to know what exactly a magic flute is, could be seen as a slightly weak justification. For most of us though, our ability to truly conceive of a future that is not ours, that is only infinitesimally connected to us, is too difficult and frankly not a priority.

Our difficulty or inability to comprehend a future that is not our own, however is not the same as not wanting that future to exist at all. The hunger stones are expected to be read by someone, a person with who there is at least a modicum of solidarity. It is precisely this urge to reach out to the future community that has been the standard tactic of climate change persuasion, until fairly recently. Essentially a moral question is posed, “don’t you think you should care about wrecking the planet because at some point in the very distant future, it will be rendered uninhabitable?” Coupled with “look how nice the world is now, don’t you want people in the future to have as nice a time as you, don’t you think you should leave the planet in a similar state as you found it?” This type of reasoning relies on a couple of things, our ability to imagine a future that is not our own and that we have a moral duty to it (and that we live in the global north that, in general, is not experiencing the ravaging effects of climate change already). These are demanding, perhaps overwhelmingly so; however, they do carry a certain emotional power.

What is now most striking is how irrelevant and moribund this appeal to moral conscience has become. The original predictions about climate change were for the distant future, certainly the really catastrophic ones. Yet now, this future is much closer to our present, 12 years to be precise. This was the headline of the most recent and alarming IPCC report, that we have 12 years before the planet will be irreversible damaged.

This should be a moment of reckoning for those persuaded, in principle, by the idea of protecting the environment for the future, but can assuage their indifferent attitude by it not being in theirs’s or even their great-great-great grandchildren’s life times. This has largely not been the case and there have been many very good explanations put forward to explain the continued lack of action. However there is one reason, that is a borderline but dangerously rational response that is rarely alluded to, what I am going to call the alcoholics’ and smokers’ dilemma.

The 12 years warning works in the same way as telling an alcoholic that if they do not stop drinking by date x then they will very likely cause irrevocable damage to their liver. What they hear is, great, so I have x amount of time left to drink, pass me the bottle opener.  This is also how the 12 years idea works, it lets us go on one more (12 year) fossil fuel bender, whilst we tell ourselves that come the end of the 12 years we will quit our addiction in the name of self-preservation. This is obviously an argument made in bad faith, but it does create a certain bind for those campaigning for ways to stop climate change. On the one hand they have to insist that action is worthwhile because the time when action would no longer be worthwhile has not yet arrived, consequently this means that we still have time to not change. The problem is the insistence that there is still time to act because if there is not then what would be the point of changing? I am probably not going to bother going through the hassle of quitting smoking if I already have terminal lung cancer.

There is no easy solution and the bind, just illustrated through slightly macabre thought experiments, clearly fails to capture the enormous complexity of the issues or what is really at stake. Equally, the devastating consequences of climate change are already being felt in many parts of the world. The churlishness of debating when and how to start, reeks of a complacently only made possible through a last ironic twist, that those most responsible for causing it, appear, for now, to be some of the least affected. A climate scientist can explain very well how burning fossil fuels effects the environment, but they are the wrong person to explain why people are happy to continue to do so.

The engravers of the hunger stones might have offered a better explanation. Following their example, the route out of the bind could see the hunger stones as evidence of human solidarity. They did not leave directive instructions, they do not offer advice or pass judgment, instead they propose a gesture of sympathy. The hunger stones stand as an example of our capacity to feel a sense of shared belonging with those who may come to stand on the same dry river bank, sometimes hundreds of years apart, and weep. To address climate change, it is possibly this capacity that could be drawn on once again