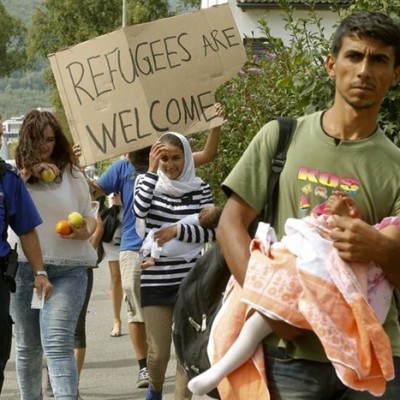 The refugee crisis in Europe is not a “flood”.  This “wave” is more like a trickle when considered against the pool that must absorb it. The European Union’s population is roughly 500 million. The latest estimate of the numbers of people using irregular means to enter Europe this year via the Mediterranean or the Balkans is approximately 340,000. In other words, the influx this year is only 0.068 % of the EU’s population. Considering the EU’s wealth and advanced economy, it’s hard to argue that Europe lacks the means to absorb these newcomers.

Positive Action in Housing has been assisting destitute refugees since 2004. We are deeply upset about the images we are seeing, again this is nothing new, in fact, there are more and worse images of children washed up on european shores. However, Facebook has banned these so as not to upset us. Us who have everything and more, who might want to share with those who have lost everything. People are telling us they want to do something. Here is what you can do now, every action here will contribute 100% to those in need. Every penny contributed goes directly to those in need.

Offer shelter or space in your home to a refugee http://www.paih.org/host-a-refugee/

With the ongoing refugee crisis, we urgently need volunteers to host refugees in their homes for temporary or longer period until they can resolve their crisis, if you are interested and have space to take someone in, please read the information pack ( http://www.paih.org/documents/DestitutionVolunteers.pdf ) and register as a host ( http://www.paih.org/host-a-refugee/ ). It doesn’t matter where you live, Positive Action in Housing can match you with someone who needs support. It doesn’t matter if you live outside Glasgow or Scotland as we increasingly have requests for support from across the UK.

This appeal is set up in response to Europe’s growing refugee crisis whereby the UK government is blocking entry to refugees trying to enter the UK and other European countries are trying to stop the movement of a small percentage of the world’s refugees into Europe, especially from Syria and other countiries. Direct, targeted humanitarian emergency crisis grants for refugees in Calais and elsewhere in Europe, to aid the provision of food, shelter, clothing, medical supplies with an emphasis on the needs of children and similar humanitarian purposes, for example the cost associated with returning the dead to their loved ones for a dignified burial, and similar. There is also an expressed desire for civic society and individuals to contribute in some way to helping the plight of Europe’s denied refugees, while developing countries take in the bulk of the world’s refugees.