The Greeks’ No vote contains lessons for us all, writes Cat Boyd 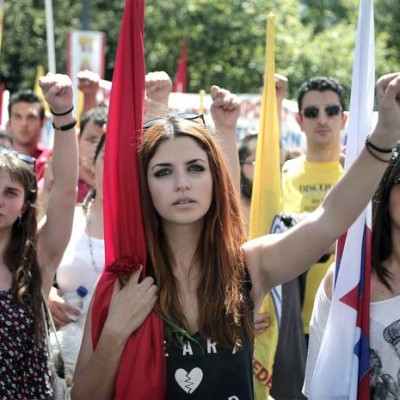 Last week’s overwhelming No (“oxi”) vote in Greece is a victory for every ordinary citizen in every corner of Europe. It shows that, given a clear choice, voters will endorse radical change to the historical settlement we have come to call “neoliberalism”. Nearly three decades ago the philosopher Francis Fukuyama said that the West’s triumph in the Cold War represented the “end of history”, humanity’s settled will for liberal democracy. Projects for radical change were therefore doomed. But in the last decade, triumphant liberal capitalism has come to mean austerity at home and war abroad. Greece in particular became a laboratory for an experiment in drastically reduced living standards for most of the population. Finally, given the choice between more of the same and the risks of radical change, the people have spoken. Reports of history’s death have been greatly exaggerated.

For Greece’s left-wing government, the vote is a triumph after taking an extraordinary risk. Given all the restrictions on Greece, given the Troika’s “project fear”, could Syriza trust the people to reject the combined authority of all Western elites? Well, now we know. By trusting to the democratic instincts of a battered population, Alexis Tsipras has arguably scored the biggest ideological defeat of free markets since 1989.

And in the best leftist tradition, he achieved it by decentralising power to the people. Without this move, they would never have survived an unprecedented campaign of bullying and propaganda that makes Better Together look like the Dalai Lama. But the battle isn’t over yet. Syriza still face the combined foe of all the strongest capitalist powers in the world, who are bent on destabilising Greek democracy. To keep their momentum, they will have to continue to delegate and to trust the people’s instincts.

The vote proves again that austerity is about democracy as much as economics. As one No voter said last night: “They talk to us about money and numbers, but we have hearts, we have souls, we have bodies.”

The Greek population knew that, if they voted Yes, they would be ruled by unelected technocrats rather than elected politicians. They’ve chosen to cling to a semblance of popular power rather than simply submit to financial market authority.

Democrats across Europe, and worldwide, are cheering this result. Let’s be clear: this is not just about Greece. It’s about how much austerity a population can take before it resists.

Tsipras knows the Troika have used Greece as their guinea pig. And if this was an experiment, it has failed. Because despite the economic battering, the wage collapse and the rocketing suicide rate, Europe’s most victimised people still preferred hope and dignity to submission.

The lesson here is as old as politics itself: you never progress until you stand up to bullies. Syriza and the “oxi” movement can inform our everyday lives and struggles. Stand up to bad bosses in your workplace, and join a trade union. Stand up to racism, sexism and homophobia, peddled by those who want to break our collective solidarity. Stand up to politicians who think they can implement cuts on a whim. Stand up to those who think they have the right to rule. Because the truth is that no matter how much they think they own and control, we have something they will never have.

The people in Greece have it, the people in Spain have it, and we do too: the balance of power always rests with the people when we stand up together against the bullies. Against the IMF, the European Central Bank, the European commission and the media, the Greek people have rejected the neo-liberal consensus. If we can show just a fraction of their bravery against our own bullies, then we too can change the course of history.