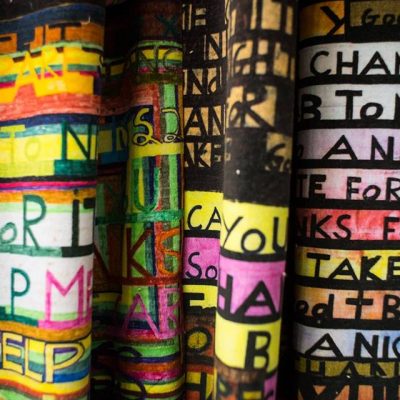 In a monumental shipping container down by Leith Docks, a Sex Pistols tribute band is playing Anarchy in the U.K. on a stage set up in the middle of the room. Either side, various constructions have been built in such a way so viewers can window shop as they promenade from one end of the room to the next, with the holy grail of a bar at either end. Inbetween, there’s a confession booth and a mock-up of a private detective’s office with assorted documentation of real-life surveillance pinned to the walls. Two people seem to be having a conversation in public as if they’re on a chat show. An assault course of smashed windows are perched on the floor like collateral damage of post-chucking out time target practice. A display of distinctively lettered signs originally created by a homeless man in search of a bed for the night are clumped together on placards that seem to be marking out territory or else finding comfort in being together. Opposite, a sumptuous-looking four poster bed is draped in materials transcribing the messages of the homeless signs asking for money to get a bed for the night.

At the far end of the room, a tattoo artist is open for business, while a woman reads extracts from the works of the Marquis de Sade into a microphone and others drift into the hellfire club-like interior of an absinthe bar that looks like the sort of place where plots are hatched. Overhead, a drone flies about the room, presumably documenting the spectacle below, but becoming part of it as well.

This was the scene several Fridays back on the opening night of Ltd Ink Corporation, the latest and most elaborate interventionalist wheeze to date brought to life by artist Kevin Harman, aka the Honourable K.W. Harman. It’s taken a while to absorb all this, but in the show’s semi-samizdat, blink-and-you’ll-miss-it execution, it’s seeming ephemerality has left a mark far greater than its physical duration.

This is nothing new for Harman, who first caused a stir with his Edinburgh College of Art degree show when he stole doormats from the front doors of local tenements and laid them out together in ECA’s main sculpture court as Love Thy Neighbour (2008). Harman then invited the 210 residents he’d purloined doormats from to visit the show and reclaim what was theirs, meeting the neighbours as part of a process that made the audience participants in an exercise in bringing a disparate and at times isolated community together.

A similar spirit was there in Ltd Ink Corporation, which for four days only took over 50,000 square feet of industrial expanse in a space originally used as a power plant prior to a botched attempt to turn it into a major artspace collapsed. Crucially, Harman and co filled it, not just with art, but with people to engage with it. Owned by Forth Ports and part of the working dockside, the space’s very location might be regarded as a statement. Walking beyond Leith Links, the odd solitary figure could be spotted on pathways around Leith Links trying to find where the hell they were going using Googlemap on their mobile phones.

It’s unlikely that this accidental exercise in psycho-geographical mapping for lost travellers forced to go to a part of town they’ve never visited before was deliberate. Even so, such a spectacle could have been part of a show that offered its audience home comforts while at the same time taking them out of their comfort zone in a resolutely constructed environment. Such is Harman’s nature in a way that’s both provocative and inclusive in its attempts at social engineering.

So the confession booth – Cobe.co (2017) – turns out to be a safe space built by vulnerable adults supported by Grassmarket Community Projects, and within which visitors confessionals are recorded to make up an ever-expanding state of collective being. The chat show is an as-it-happens conversation between artists Mark Leckey and Richard Prince that’s being broadcast live online during the course of the show. The windows set up as if for a slalom race are both evidence and relics of real life attacks, and the two parts of Being Homeless is Hard, Having a Hoose is Harder (2017) lends the everyday plight of homeless people a dignity in a way that cannot be ignored. The effect of all this, combined with the sound-bleed of some of the other material on show, makes for an at times overwhelming but never dull experience.

While ostensibly an early to mid career retrospective, by off-loading Harman’s assorted concerns and obsessions into one gigantic dumping ground in such a way is akin to building a kind of punk-inspired fun palace or theme park. While a look-but-don’t-touch formality remained, there was a physicality about everything that made the audience bit-part players in a social experiment dressed up as a not so private view on a fantastical temporary stage set worthy of Banksy’s Dismaland.

At the end of the night, everyone decamped to local boozer The Pond, a place currently suffering from the economic downturn, despite the attempts at gentrification starting to pop up alongside the storage centres, garages and containers that line most of the area. Watching the pub landlady forced to close the doors because the place was so full was a final work of art in which we could all join in if we wanted. If only we could get the bar-man’s attention and get served, the revolution would be complete.