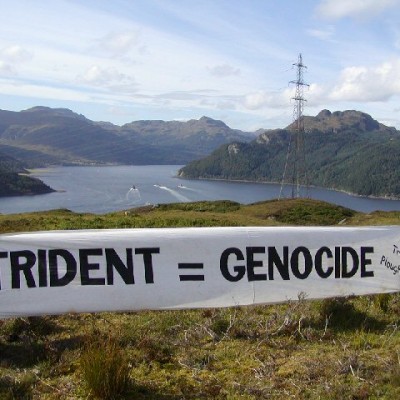 Opportunities for the public to effect political change are like a number 9 bus. You wait for ages and then two come bumper to bumper. Just as the excitement of the referendum campaign dies down, so the electorate in Scotland have a second chance to cast their vote in a way that can make a real difference.

In recent general elections turnout in many constituencies has been low, fuelled by the soporific realisation that the outcome was pre-ordained. A single cross on the ballot paper would make no difference, because a Labour or Lib Dem victory was all but certain. But May 2015 is different. On the streets there has been a groundswell of engagement in political life and a surge in SNP, Green and SSP membership. Opinion polls, measuring the new era, suggest that there is no safe Labour, Lib Dem or Conservative seat in Scotland. So, one flap of a butterfly’s wing can herald a political storm.

Likewise, Scots have a second chance to have a say about the future of nuclear weapons in Britain. Decisions about nuclear policy are normally made by the select high priests of the Special Relationship. The common woman or man has no access to the inner sanctum where the secret rites of Trident are performed. The British nuclear weapons’ programme is entirely dependent on the steady flow of classified data from the United States. This stream of deadly knowledge would be imperilled if the decision-making process was opened up to genuine political scrutiny.

Just days before the referendum there was a meeting of the senior Navy officers and Whitehall mandarins who lead the programme to replace Trident with a new nuclear weapon system. The outcome of their discussions was not disclosed. It would have been interesting to have been a fly on the wall, listening to their panicked voices as they contemplated the possibility that the votes of a plumber in Glasgow or a carer in Aberdeen could consign all Britain’s nuclear weapons to the dustbin of history. Labour politicians delighted in teasing the SNP with the suggestion that a Yes vote would just have moved Trident South of the border. But those in the know realised that relocation to England or Wales would be well-nigh impossible. Rear Admiral Martin Alabaster, former Faslane Commander, said it was “almost inconceivable”.

Although that chance slipped by, the vote on independence galvanised radical politics in Alba and it raised awareness of Trident. With this heightened realisation of the deadly weapons in our midst has come a rise in indignation, determination and blood pressure. We will not sleep quietly in our beds as convoys transport radioactive Weapons of Mass Destruction through the heart of Glasgow, along the M74 and M8, in the early hours of many a morning. We will not look away as nuclear submarines drive themselves onto the rocks of Skye.

Devotees of Trident, like Jim Murphy, falsely describe the Weapons of Mass Destruction at Faslane as Britain’s “independent nuclear deterrent”. Trident is an American missile. All of the hardware associated with it is of US origin. The nuclear warhead contains key components which are purchased, off-the-shelf from their US manufacturers. Declassified files from 1979 show that, with regard to Trident, “independence” means that Faslane has a 12-month supply of spare parts from the US Navy. If the White House withdrew support, the British Trident system would wither on the vine after one year. The fire control and targeting software is written on the other side of the Atlantic. The UK requires access to American nuclear target data on a daily and continuing basis. If this software support was withdrawn then Trident might be out of action even more quickly.

The myth of nuclear deterrence has been punctured by General Lee Butler. Between 1991 and 1994 Lee Butler was in operational command of all US nuclear weapons. Shortly after retiring, he launched a stinging critique of the false doctrine into which he had been indoctrinated. He said – “Deterrence evolved from an increasingly convoluted morass of unwarranted assumptions, unprovable assertions and logical contradictions. .. Deterrence was the first victim of real world crises, leaving the antagonists to grope fearfully through a fog of mutual misperception toward the brink of the nuclear holocaust. .. Deterrence was a dialogue of the blind with the deaf. .. We cannot sit in silent acquiescence to the faded homilies of the nuclear priesthood. It is time to reassert the primacy of individual conscience, the voice of reason and the rightful interests of humanity”.

Lee Butler set up the Second Chance Foundation, because he believes that humankind has been given another opportunity to turn away from the annihilation that lies ahead if we continue with our obsession with nuclear arms. Here in Scotland, we have our own particular second chance to denounce the nuclear demon. If we select a band of MPs who are firm in their determination to scrap Trident, then we can influence the future of British nuclear weapons. The submarines at Faslane are already a thorn in the side of Scotland’s body politic. If Westminster chooses to go ahead and squander £100 billion on replacing Trident, against the wishes of our elected representatives, then they will be driving the thorn deeper into our side.

The MPs who go to the House of Commons will be responsible for two key decisions. In early 2016 they will make the Main Gate decision on Trident replacement. At the heart of this is the plan to build three or four new nuclear-armed submarines. The new MPs will decide whether or not to give the go-ahead to these new monsters of the deep. Even before the decision is taken the Ministry of Defence will have spent £4 billion on the submarines. The total through-life cost of Trident replacement will be in the region of £100 billion. This is £100 billion less to spend on our children’s future and on the most vulnerable in our society. In 2019 the same MPs are due to make a second decision, on building a new nuclear warhead.

Recently Andrew Marr asked Paisley MP Douglas Alexander what cuts the Labour party was planning to make if they were in power. In another logical universe, Alexander could have said that Labour would scrap Trident replacement. But he didn’t. Instead he said that Labour would cap the amount that Child Benefit would rise, to one percent for two years. He is clearly standing on a platform of Bombs not Bairns. But there is a stronger voice to be heard in our streets and glens and it is saying that our priority should be looking after our young people, not threatening children in foreign lands with nuclear annihilation.

Hitting the target and missing the point