The Portuguese use masks to keep COVID at bay, while the English rely on a misguided sense of national exceptionalism. By Caroline Molloy 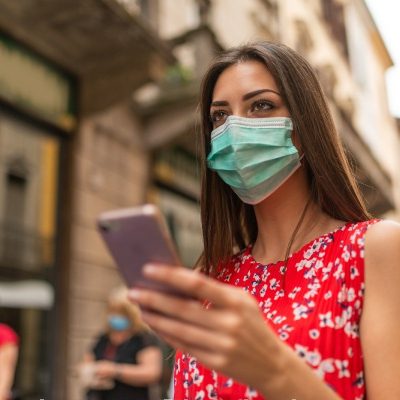 For a certain type of Englishman or woman, our national self-identity is one of stoicism, moderation, and being ‘good in a crisis’. You know the script – we withstood the blitz and beat the Nazis, possibly with a flashback to the band playing on as the Titanic sank. The ‘good in a crisis’ version of our identity needs a history update and a geography lesson, if we’re to understand why Britain is seeing COVID rates soar once more whilst our western European neighbours look on in dismay.

I arrived back from a holiday in Portugal this week reflecting on our national character, and that of another small maritime nation, one with the longest-standing national borders in Europe. One that, like England, for a time controlled the most expansive empire in the world, but now merely shares the language of an economically mighty former colony across the Atlantic.

Portugal has one of the highest vaccination rates in the world, far higher than Britain’s. But unlike Britain, it’s not putting all its faith in jabs and a sense of national exceptionalism. Everyone – including children – wears masks inside public buildings, shops, and on (excellent) public transport. Publicly owned buildings, sights and shops also had staff politely reminding tourists about mask-wearing (the Portuguese simply get on with it), and sometimes taking our temperature, with signs reminding us not to spend too much time inside. Life is lived more outside, of course – but many wear masks on the street, too, certainly in crowded outdoor areas.

I didn’t notice anyone looking discernibly oppressed by any of this, but it’s good to check. In England, sections of the media have suggested that mandating masks is a totalitarian, even fascist, measure. I put this to a couple of residents. They looked baffled. This is a country that knows exactly what fascism is – it overthrew it in 1974, when the Carnation Revolution ended Salazar’s brutal regime.

But unlike England, Portugal appears to have come to terms with its relative insignificance, loss of imperial status, and turbulent history, and has focused on looking after its residents.

In the heart of Lisbon, locals chatted to each other across scenic alleyways, tolerating our tourist presence; controls on rents and evictions, whilst reduced in recent years, still to some extent protecting long-standing residents from being gentrified out. The shops were full of fresh produce – unlike the shelves I returned to in my local supermarket back home. Environmental measures and solar panels were everywhere. The hash dealers were cheery and open (we declined), drugs having been decriminalised here 20 years ago and addiction falling as a result. After Lisbon we stayed in a non-touristy, working-class town, but nowhere we went felt ‘edgy’. We spotted signs everywhere making clear that refugees were welcome. Portugal, long one of the poorest countries in western Europe, felt the heat of the 2008 financial crisis, but elected a socialist minority government supported by the Left and Greens that undid some of the neoliberal reforms imposed in its wake and invested in services instead.

I returned to England to find a government that is treating mandatory mask-wearing as some kind of nuclear ‘Plan B’ option to be withheld until the last possible minute, even as COVID cases and hospital admissions soar. To see the freedom not to wear a mask, to infect others, still being treated as a patriotic liberty to be preserved at all costs, in the eyes of the right-wing media and Tory MPs.

I returned to find our area had become one of the country’s COVID hotspots, after the privatised lab thought to have served our drive-through test centres allegedly missed 43,000 positive diagnoses. I found some friends sick with COVID, and others being threatened by privatised Test and Trace operatives if they went outside for a breath of fresh air, even when the call had come long after they’d actually had the virus.

Some friends were being hassled to hand over all their contacts – knowing that those who would be made to isolate had no guarantee of job protection or sick pay – and certainly not of adequate sick pay – nor of getting the hard-to-access and inadequate COVID support cash, in Britain’s threadbare welfare state, with benefits amongst the lowest in Europe. Knowing that their contacts were already struggling to pay the energy bills, feed the kids, and afford decent internet; knowing that those who fall behind with rent have had their protection from eviction stripped away – and that property prices in our small town are surging as Londoners weary of pandemic life ‘dash for space’.

In Britain, many are left having to rely not on the state but on crusading footballers and the goodwill of privatised utility companies. Public health interventions are written off as fascist – and if someone, a leader of the opposition, say, was to come along offering free broadband, European-style rent controls and better sick pay, well, that’s Venezuelan-style totalitarianism, we’re told.

This neoliberal doctrine has warped the psyche of our ruling class – of all of us – harming trust, weakening resilience, and leaving us intensely vulnerable to this pandemic. Its solutions have been trained for decades on a string of fake crises stoked by tabloids – that we are ‘swamped’ by migrants, ‘duped’ by ‘benefit scroungers’ and ‘shirkers’ claiming disability, that our ‘way of life’ is threatened by drugs, street crime and indeed the hapless ageing population.

All of these are seen as issues that can be ‘solved’ with a profitable morass of call centres, websites, and deliberately inhospitable ‘centres’, provided by outsourcing firms paid billions, overseen by consultants paid millions, staffed by demoralised workers paid peanuts; a corporate world that treats humans as objects to be corralled, disciplined, left on hold, and abused – the latest ruse is to make benefit claimants pose for ‘kidnapper-style’ pictures. To treat them as units to be bounced around between the pillars of the market, their patience and human needs for support, treated merely as economists’ ‘externalities’ to be offloaded onto users in the name of someone else’s bottom line.

These ‘solutions’ may work to solve ‘problems’ that were always nothing more than invented moral panics. But they offer little insight as to what to do when things really go wrong.

It’s little surprise that when it comes to real crises – be it COVID, or indeed climate change – this neoliberal state has failed us utterly.

You might, if you were the certain type of Englishman or woman invoked at the start of the piece, perhaps retort, if you like Portugal so much, why don’t you just move there?

Well, I have an Irish passport, so I could. But that doesn’t really solve your problem.