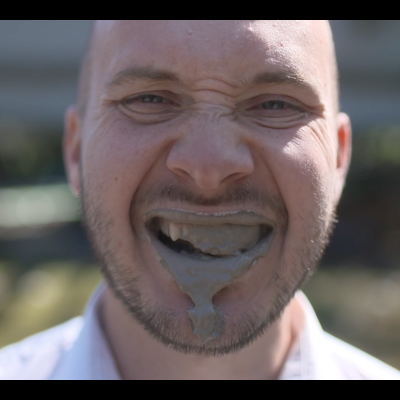 Keanu Arcadio: Tell us a bit about your background. Where did you study? And your main influences?

Julian Tolhurst: I consider myself to be a Canadian and British artist. I was born in rural Canada, outside Ottawa, to two English parents. My Dad is from Shepherds Bush, my Mum from Ealing. So somehow growing up surrounded by nature and yet having a kind of urban history in terms of the storytelling within our family was an interesting contrast in my formative years. I studied my undergraduate degree at a small university in Northern Canada. I had originally gone to study English, but switched to art because I couldn’t sit through lectures. My main influences at the time depended on what I could find in the university’s library. There seemed to be only 6 or 7 books that seemed contemporary to me, so I took these out religiously because they opened a world to me in which aesthetic and conceptual values could take many forms. I remember that there was a book on Mimmo Paladino, Francesco Clemente, Anselm Keifer, and contemporary drawing. At the same time, I began to discover the Tateshots series on Youtube – this must have been around 2006, and because of this series and others like it I was able to keep up with trends that were happening in New York and London. Now my main influences come from other artists I meet. I think that the personal bond and connection as well as dropping by each other’s studios makes their influence more concrete. Here I would like to say that Roi Carmelli (an Israeli artist working in Glasgow), as well as Johannes Neilson (a Swedish artist working in Beijing), have in the past 5 years influenced me through our discussions and in sharing practical techniques and concerns.

KA: Could you elaborate on the books you read that influenced you? Any particular pieces or theories you continue to reference today?

JT: I never read the articles in the books. I liked to surround myself with them, and take in the images, and derive feelings from those pictures, but somehow reading criticism seemed to close the possibilities of the works rather than expand them. I also found at the time a lot of writing about art to be bad writing because I couldn’t follow it and thought that most people I knew and loved would also struggle to understand it. I didn’t go to a proper art school until I did my MFA at the Glasgow School of Art in 2015, and when I did show up I felt behind a lot of the other students because they were referencing the ideas of Joseph Beuys or Foucault. But later on I felt like at times they were using these ideas as a kind of crutch to justify the works that they made. I like to think that somehow art should reflect your own experiences in some way, even if that comes from something daft like watching way too much sport or grinding your teeth at night, but somehow passion and the messy bits of life should be involved – and theories didn’t seem like a good starting place. However, now I do read “art writing” and find it an interesting activity because often I fall in and out of an article in terms of concentration – and this mental action is in itself curious.

KA: Let’s talk about your series of sculptures RED HEADS, the abundance and consistency of these existential heads lead to maybe commentary on  collective thought or mass society? Can you share what was your rationale on this project?

JT: I was living in China when I made these heads. I had a studio in an artists village outside of Beijing. I was concerned with freedom of speech, freedom of movement, and at the same time the idea of the copy or replica and how this idea could be used as a social tool. Some of my local friends who were artists experienced difficulties if they made the wrong kind of work or if they travelled or tried to move, so I made this kind of obvious and didactic sculpture as a reaction and had 14 of them cast in fiberglass and painted in a colour called China Red. I tried to use them as a tool for social interaction as well as a way to interact with the landscape and would set them up in people’s houses around the village, or in a recycling yard and even took 6 of them to Hong Kong with me at the end of the Umbrella Movement. They began a few interesting conversations as they were overtly political and their glossy finish contrasted against the environments I put them in, and at the same time, they also seemed to make people laugh, especially the sight of me on my hands and knees arranging them.

I am not sure if I had the right to make this commentary, or if I would do it again, but I was a bit younger and things were happening like the police would come into one of the rock clubs and close the doors and make all the customers go through a piss test to make sure that they weren’t on drugs. This kind of simple and yet terrifying clamping down creates the space and maybe even the need for simple and guttural artistic reactions. It felt good to make these sculptures anyway, and to carry them around or take them on trains. 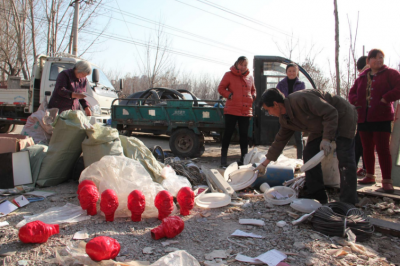 KA: In respect of your response to the lack of artistic freedom in China, would you say that your series, RED HEADS, was an illustration of the problem? Did you foresee it having any political impact? Change even?

JT: I think it is important to note that this freedom fluctuates. You can go to the commercial gallery district 798 in Beijing and see works like a sculpture of Chairman Mao without a head in a place that gets thousands of tourists everyday. Some symbols have been given over to critique, but can just as easily be snatched back again without warning. This freedom can also depend on wealth or the prestige of your family, but this too can go without warning. I think Ai Weiwei is an interesting example of this complex relationship. 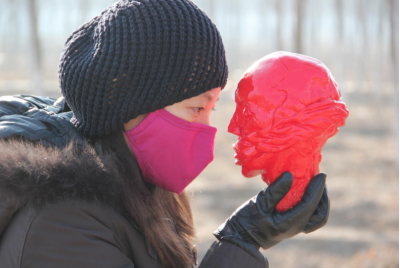 KA: Clay has a long history with sculpture. Was your video piece Clay, as an action of eating clay, a critique of society’s consumption of art? Maybe you can assimilate your thinking during the making of this piece?

JT: I was thinking about the “artists” consumption and my own consumption of raw materials – and how could I interrupt this cycle of practice. Many materials that artists use are finite or toxic to produce (even paints can have a wild production story), so how could I still be playful in making work, but responsible at the same time? This line of thinking may have been pushed forward by the fact I was pretty poor at the time – if I could have afforded to make some traditional sculptures I probably would have. However, it takes a lot of ego to form things in bronze or other materials that will be around for a long time, and I have been guilty in the past of making some bad sculptures and casting them regardless – just in case the material would elevate the work and save it. So, I had this in mind, but also the idea that the sculptural action would be mostly unseen, taking place in the mouth, at the back of the throat, and dripping down the front of my shirt. The sculpture then is taking place inside – the object is developing in the artist – rather than being put out into the world. I also like that this makes the work as an “object” difficult to collect. What is interesting now is that it has been taken up and is often placed in playlists on Youtube with a group of people who eat clay, or watch other people eating clay, as a kind of therapeutic activity. This group tends to eat clays that are harder and make crunching noises, whereas I kept my film silent as the sound made it too grotesque.

KA: A pragmatic approach to sculpture considering your circumstances, a lot of artists out of lack of funds and studio space utilize mediums of video and performance, in Clay you’ve managed both. What can we expect from you next?

JT: I just finished shooting a video in which I bathe a football, soap it up, kick it around the ellipses of a bathtub. I shot it with the help of Andy Brown, a cameraman and editor in Glasgow. I am still in the process of putting it together. I see the idea as belonging to the self-help genre: like 12 objects to bathe with to make your life more interesting (…a tombstone…7 fur coats). In any case, these small gestures and sketches of gestures are where my head is at right now and I am happy to let things develop a little slower than in the past.