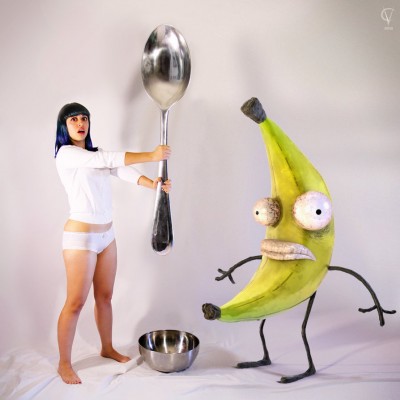 In September 2014, The Simpsons commenced its 26th season with its most surreal and subversive couch gag ever. Every episode started with a slightly off-beat moment where the family sat on the couch in a new, silly way, but this one was different. Homer’s TV remote had become a time travel device, and the family were rocketed into the future of the show, where they had  become absurd stick figures, blurting out warbled catchphrases and declaring allegiances to the dark lord of the twin moons, in an episode that takes place in ‘Septembar’. Some Chopin starts playing, it moves further into the future and glimpses of other episodes play, riffing on classic themes. It’s bizarre and disturbing. It contains both body horror and classical music, and the animation style is apparently very rudimentary. All these things point you towards just one man: Don Hertzfeldt.

The awards-laden director is one of the best creators of animated shorts around, so anybody wanting a glimpse into that world must, at some point, take a trip into Hertzfeldt’s brain. The Simpsons intro is, by far, his most mainstream project yet, but the animator has been garnering a cult following for some time, with a steep rise in interest after his Oscar nominated short Rejected. A compilation of sketches held together by the conceit that they are all rejected adverts, it is a mixture of hilarious non-sequiturs, occasionally gross or distasteful humour and a streak of meta storytelling that marks Hertzfeldt out as a unique voice in cinema.

If the simple, jittery stick figure drawings weren’t enough of a clue, the way that Rejected collapses in on itself displays the sheer anarchy and non-conformism of Hertzfeldt’s work. A lot of his animation is improvised – not something that is usually possible when you have to synchronise voices – and his freeform approach means that even with the basic shapes that he draws, the outlines are constantly moving with imprecision. Yet the crude characters belie the technical complexity and emotional nuance that goes into each one of his films. While some of his sillier shorts that he has made as a diversion – Wisdom Teeth and Billy’s Balloon – are a little one joke and perhaps too cruel with their humour, Hertzfeldt mostly makes rich, accomplished films.

The best example of this is his trilogy of shorts, Everything Will Be Ok, I Am So Proud Of You and It’s Such A Beautiful Day – the name, also, of the film that brings them all together in one place – which follow the life of a man, Bill, as he has a mental breakdown, reminisces about his past and looks to a future where death seems to await him. It’s in these films that the use of his stick figures begins to make more sense: Bill, in spite of looking like a child’s drawing, becomes immediately relatable through the way that the disinterested voiceover narrates his inner life, and the observations he makes. By stripping away any aesthetic distraction, Hertzfeldt makes the audience focus on what he might be saying. That’s not always obvious, but it creates a totally compelling narrative, complete with reflections on death and immortality. Bill is drawn as the most basic, indistinct human form and through that simplicity emerges universality – we are all, in some way, Bill.

One of the most important facets of a Don Hertzfeldt film is his choice of classic music. It’s A Beautiful Day makes superb use of Smetana’s Ma Vlast and Wagner’s prelude to Das Rheingold, two pieces of music that may be familiar to fans of Terrence Malick. The comparison isn’t too ludicrous, as both directors take thoughtful approaches to man’s place in the world and both have filmed creation and evolution sequences. Hertzfeldt is a deep thinker, and his philosophical ponderings emerge in his strangely beautiful films, the music elevating the simplistic drawings to something grander and, occasionally, cosmic.

All of which takes us to World of Tomorrow, Hertzfeldt’s latest short, which he’s made available to watch online. The director has seemingly been on a trajectory from his witty, anarchic shorts of his earlier films to something richer and more profound. He’s an artist obsessed with the future: The Meaning of Life charts humanity’s evolution well past its current form, while It’s Such a Beautiful Day ends with a metaphysical, melancholic look at eternity. World of Tomorrow, as the title suggests, is a journey into the future as seen through the eyes of a four year old girl (with freeform dialogue recordings of Hertzfeldt’s niece of the same age). It brings together everything familiar from the director’s work: classical music; stick figure drawings; deep meditations on humanity; mordant humour; surprising emotion. It’s a masterpiece, contemplating our place in the universe and what it means to live. It’s his most sophisticated film yet, both technically and philosophically, which is incredibly exciting as it suggests that this already vibrant film maker has even better things to come.